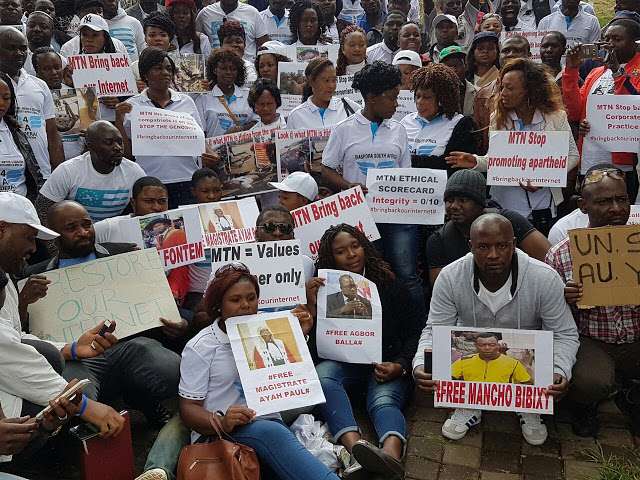 An internet shutdown in the primarily Anglophone regions of north-west and south-west Cameroon is now in its 13th day. The shutdown was first initiated across the country on January 16 and on January 17, internet access was reinstated in the Francophone parts of the country. As of January 30, the blockage in the Anglophone regions including in key towns such as Buea and Bameda remains in pace.
The shutdown was imposed in the wake of ongoing strikes, fatal violence and protest action against the continued “francophonisation” and marginalisation of English speakers who say that “the central government privileges the majority French-speaking population and eight other regions.” Cameroon’s constitution recognises the two languages as equal and calls for bilingualism. Further, the arrest of the activist leaders of the Cameroon Anglophone Civil Society Consortium, Nkongho Felix Agbor Balla and Fontem Neba, have done little to address the perception that government is trying to silence voices of dissent.
Critics of the shutdown have called the shutdown a violation of “citizens’ rights to freedom of expression and access to information”. On January 22, civil society organisations from around the world sent an open letter to the President of Cameroon, and the ministers for telecommunications and communication urging an immediate end to the shutdown. No response has been received.
Indeed, there has been global outcry on the shutdown which has affected the livelihoods of millions of citizens in the affected regions. Mobile Money services providers, microfinance Institutions and banks have also been affected, forcing residents to travel to Francophone towns like Douala to conduct their financial transactions (Listen to iAfrikan podcast).
In the days leading up to the shutdown, the Ministry of Post & Telecommunications (MINPOSTEL) issued a directive to operators to send out messages warning subscribers against the “bad” use of social media.  Operators received backlash on social media for sending the government-directed message which was seen to encourage self–censorship.
However, Philisiwe Sibiya, CEO at MTN Cameroon, argued that the communication was not intended to “curtail customer rights and violate customer privacy.” She explained that the regulator, MINPOSTEL, “may from time to time request telecom operators to carry messages on their networks intended for the general public. This was the case recently when MTN Cameroon, along with other operators, broadcast a message from MINSPOTEL regarding the use of the internet.”

“Dear subscriber, publishing as well as spreading false news,including on the social media, are punishable by the Penal Code and the law

Back in November 2016, the government launched a campaign against social media, calling it “a new form of terrorism”. At the time, Facebook and Twitter users were sharing information, including pictures, about a train derailment in which 80 people died while government maintained silence about the accident.
Whereas language as the basis for an internet shutdown is new, the practice has become common in Africa particularly during political unrest (Burundi), elections and inauguration (Uganda), economic failure (Zimbabwe) and exams (Ethiopia).
Various campaigns are underway calling for the Cameroon Government to reinstate internet access, including this Use your voice! Tell Cameroon to turn the internet back on  and the hashtags #BringBackOurInternet #KeepItOn.
See this Aljzeera discussion titled Is Cameroon persecuting its English speakers? It features Elvis Ngolle Ngolle – Former Minister of Special Duties in the Office of the President of Cameroon. Julie Owono – Head of the Internet Desk at Internet Without Borders and Albert Nchinda – Political Analyst.
Image: Cameroonians in South Africa gathered at the MTN Headquarters in Johannesburg to protest the shut down of internet in its English-speaking regions of Cameroon.
Source: Kinnakas Blog