The Internet Shutdown In Ethiopia Costs The Country Approximately $500,000 A Day In Lost GDP 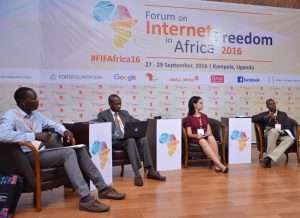 In October 2016, Ethiopia declared a state of emergency which saw it impose certain measures that included telecommunications, media and Internet shutdowns along with travel restrictions on diplomats and a dusk-to-dawn curfew, to name a few of the measures implemented. The state of emergency, effective from 08 October 2016, comes as a result of about five hundred people being killed in protests in the Oromiya region surrounding the capital Addis Ababa and other parts of Ethiopia since 2015. This is, as reported, after anger over a development scheme for the capital sparked broader anti-government demonstrations over politics and human rights abuses.

Ethiopia is not new to Internet shutdowns with another Internet shutdown taking place as recently as July 2016 with the government stating that it took this drastic measure to prevent leakages during the national exams.

At the recently held Forum for Internet Freedom in Africa 2016 in Kampala, Uganda a panel on the opening day discussed “Internet Shutdowns and Internet Rights” and asked the pertinent question – “Where do we draw the line?”

In 2016 alone, the panel noted, Africa has experienced Internet shutdowns or social media bans in several countries including Zimbabwe, Uganda as well as Ethiopia. Notably, these shutdowns or bans typically revolved around political unrest or elections.

Technically speaking, and as witnessed across different countries in Africa and as discussed on the panel, an Internet shutdown usually involves a government’s ministry typically issuing a letter or instruction to the telcos and mobile service providers operating in that country requesting they cut off Internet access completely (or specific services) to their customers.

In Ethiopia, it is even easier for the government to effect an Internet shutdown as the East African country has only one telecommunications company, Ethio Telecom, which is also state-owned and the only provider of Internet access in the country. This further raises the question of who should be entrusted with provision open and unfettered Internet access to citizens. That’s just the tip of the proverbial iceberg, as Internet shutdowns come with a cost to a country’s economy. Continuing with Ethiopia as a case study, is perhaps the impact and cost of the Internet shutdown exaggerated given that the country only has an Internet penetration rate of 2,9% (as per 2015 Freedom House Report)?

Ethiopia Feedom of the Net 2015 Report

A recent report released on 27 October 2016 by the Global Network Initiative along with Deloitte suggests that the current ongoing Internet shutdown in Ethiopia is costing the country approximately $500,000 a day. The report explains that, in dollar terms, it is estimated that for the average highly-connected country, the per-day impact of a complete Internet shutdown would amount to US$23.6 million per 10 million people. For the average country with medium and low levels of connectivity, the estimated GDP impact amounts to US$6.6 million and US$0.6 million per 10 million people, respectively.

“This analysis suggests that the ongoing Internet shutdown in Ethiopia, a low-connectivity country with a population of 94 million and a per capita GDP of US$505, is costing its economy just under half-a-million US dollars a day in lost GDP. “The economic impact of disruptions to Internet connectivity 2016 Report

The report sheds light on the impact on Internet shutdowns and illustrates that irrespective of low Internet penetration rates in country’s like Ethiopia, the impact is still quite high given how the Internet is used in various economic activities.

Furthermore, it is encouraging to hear the United Nations Human Rights Committee condemn Internet shutdowns in their recent resolution.

The United Nations Human Rights Council stated that it condemns unequivocally measures to intentionally prevent or disrupt access to or dissemination of information online in violation of international human rights law.” Specifically calling on all States to “refrain from and cease such measures.”

This article was first published at iafrikan on October 28, 2016.

Next: Project Evaluation: Open Data and Right to Information