When Uganda introduced a tax on social media use in 2018, the government hoped the new source of revenue would help widen the country’s tax base. Instead, internet subscriptions fell drastically and the government did not raise the anticipated revenue as most users turned to Virtual Private Networks (VPNs) to access social media platforms.

Three years later in July 2021, Uganda abandoned the levy on social media access and instead introduced a 12% tax on internet data. Still in its early days, the effects of the new tax are yet to be seen. Nonetheless, like its predecessor, the tax is likely to affect internet access, the country’s fledgling digital economy, and digital civic space.

Yet Uganda is not alone in the growing trend of digital taxation. From South Africa in the south, Kenya and Tanzania in the east, through to Nigeria in the west, as the Information and Communications Technology (ICT) sector grows across the African continent, several countries are turning to the sector as a target for new revenue streams.

But there appears to be no stakeholder consensus on digital tax rules, with activists, economists, technologists and innovators at loggerheads with tax bodies and communications regulators on how to overcome economic downturns while driving digital transformation and upholding digital rights.

This balancing act formed the basis of a recent workshop on the impact of digital taxation on digital rights in Africa organised by the Collaboration on International ICT Policy for East and Southern Africa (CIPESA). The workshop brought together 66 participants from across the continent and beyond to deliberate on good digital taxation practices and the impact of taxation on users and national ecosystems. The workshop featured perspectives from platform operators, national and regional regulatory bodies, tax authorities, and policy makers.

Speaking at the workshop, Professor H Sama Nwana, a technology and telecommunications consultant affiliated with the UK-based Cenerva, said digital taxes in various forms are not only regressive, they disenfranchise poor and marginalised groups such as women and the youth. “If you apply a flat tax, it is going to affect the less privileged and people who need the internet the most, such as women in rural areas. The social media tax in Uganda impacted some of the poorer provinces more than people in urban areas such as the capital Kampala,” he explained.

According to Nwana, countries which have introduced digital taxes have registered a subsequent decline in the number of people accessing and using the internet and other ICT-related services, ultimately leading to less revenue generated for the government. “This is paradoxical because when you try to drive up your tax revenue by putting up more taxes onto the system, people stop using data services to transact or carry out other businesses such as agriculture and financial services,” said Nwana. 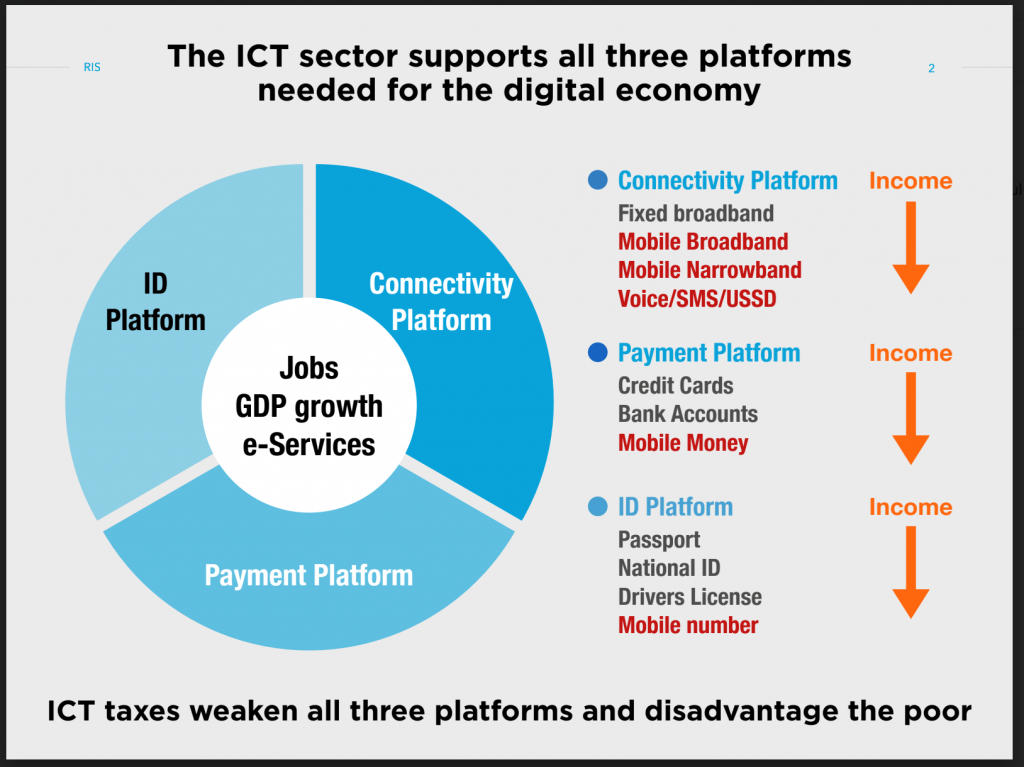 Access to affordable internet is still a challenge for many across the continent. With just over a quarter of the population online, additional costs including taxes deepen the affordability challenge. Indeed, as the Alliance for Affordable Internet (A4AI) Africa Regional Coordinator Onica Makwakwa argued, “taxes that are passed on to consumers further burden those who are already struggling with the cost of access” and it is thus crucial to “guard against over-taxation” especially in light of the Covid-19 pandemic which has made the need to be connected and have access to affordable internet even “more urgent”.

“What we have in Africa is an affordability and accessibility gap which needs to be closed,”  said Dr. Christoph Stork, a telecommunications expert with Research ICT Solutions. “To be able to provide e-services such as health, education and fintech, we need increased connectivity. ICT taxes make these services either too expensive or less attractive to invest in.”

Taxation, according to Stork, should be broad-based, easy to enforce, provide incentive for competition and investment, and be progressive. “The [Uganda] Over the Top Services (OTT) tax, for example, is regressive because everyone pays the same amount regardless of whether they are rich or poor. These kinds of taxes in general prevent the poor from participating in tomorrow’s internet society,” Stork said. 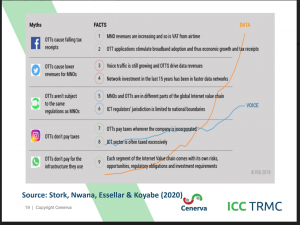 The CIPESA Programme Manager, Ashnah Kalemera, cited the example of Chad, a country with one of the lowest internet and mobile penetration rates on the continent and a history of restricting citizens’ access to internet platforms, which in January 2020 eliminated an 18% excise duty on mobile internet to facilitate increased access and usage of data by citizens. On the other hand, in countries such as Malawi, where telecommunications operators have over recent months made strides in lowering the cost of data services, Kalemera said the government maintains various ICT-related taxes that continue to affect affordability.

Nwana said research shows that for every 10% increase in mobile broadband penetration, there is an increase of between 0.82 to 1.4% in Gross Domestic Product (GDP) of developing countries in Africa. He added: “Why do we want to forego this growth by increasing taxes which drops the number of people using broadband data services, which clearly adds significant value and GDP growth to our economy?”

The digital tax debate has also featured discussions around how African governments can derive revenue from big multinational companies such as Facebook which are domiciled abroad but have a significant number of users on the continent.

Jacob Puhl, Manager of Tax Policy at Facebook, noted that while the social media platform generates about 98% of its revenue from advertising, only about 8-9% of that revenue comes from emerging economies in Africa and Asia. “People keep asking, ‘you have users here, why don’t you pay taxes?’ Because users of our platform are all over the world, there is a lot of misunderstanding about where our revenues come from as well as our advertisers. Advertisers pay more to reach markets where e-commerce is robust,” said Puhl.

Indeed the impact of taxation on e-commerce platforms was highlighted as part of the workshop’s deliberations. For instance, according to Ron Kawamara, the Chief Executive Officer (CEO) Jumia-Uganda, the introduction of the OTT tax led to a decline in the number of vendors and customers on their platform despite the potential that e-commerce presents for the country and continent.

“Before the tax, we had a reach of about 11 million users on Facebook. That dropped by 35% with the introduction of OTT. And with users turning to VPN, it becomes difficult to reach customers with one service or the other,” said Kawamara.

Jumia Uganda is a subsidiary of the pan-African e-commerce company Jumia Group, which is Africa’s largest online retailer. Launched in 2012, it currently has operations in 11 African countries as well as China, United Arab Emirates and Portugal.

While e-commerce platforms can be catalysts for revenue generation for governments, the lack of visibility of some of the platforms has made it difficult for tax bodies to properly track and ensure tax compliance. This, according to Milly Nalukwago Isingoma, the Assistant Commissioner Research, Planning and Development at Uganda Revenue Authority (URA), has impacted how much revenue the government is able to generate from online platforms and businesses.

“With the previous model of taxation, you had to have a physical address where you could reach the taxpayer. Now transactions are happening online with no visibility and our collections have remained low. This is what forced us to come up with taxes such as the OTT tax,” said Isingoma.

Isingoma acknowledged that implementing the tax was difficult and less revenue than had been projected was collected. “We do acknowledge that we got it wrong with the OTT tax. That is why we decided to work with the telecom companies to come up with the 12% excise duty that cuts across. This way, we are also able to protect the revenue base of the telecom companies,” said Isingoma.

Dr. Peter Mwencha, Director at Consumer Unity & Trust Society-Africa Centre, called for an update to tax laws on the continent in order to protect consumers and integrate the digital economy. Similarly, James Mutandwa Madya, the Director for Policy and Strategic Planning at the ICT ministry in Zimbabwe, noted that in order to address some of the challenges and limitations of digital taxation, tax models should be reviewed with the interests of governments and consumers taken into account.

Creating this balance requires collaboration between regulators and tax bodies, according to  Anthony Marufu Chigaazira, the former Executive Secretary of the Communications Regulators Association of Southern Africa (CRASA). “Collaborative regulation should be at the forefront otherwise we end up with tax authorities who do not understand the sector proposing taxes that infringe on digital rights and impact the majority of the population,” said Chigaazira.

Indeed, as noted by Pria Chetty, Director of the South Africa-based EndCode, it would be instructive to understand the trajectory of models informing specific digital tax approaches in different countries. According to her, “it would be too simplistic” to consider the motivation for digital taxes as merely a government “grab” for new taxation sources.

Chetty added that instances where digital taxes have been withdrawn, including outside the continent, should offer learning to African regulators. “Regional and continental guidance on taxation that accounts for the unique costs of connectivity and unique value chains should also be a priority. National approaches should account for the state of the digital economy, existing tax structures, fundamental rights and competition dynamics,” said Chetty.