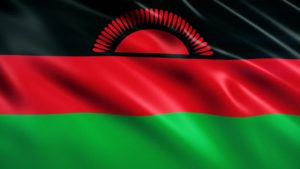 Data prices in Malawi have been reduced following recent engagements between the Malawi Telecommunications Regulatory Authority (MACRA) and telecommunications operators. Under the new rates, the cost of 1GB to 4GB bundles are down by between 10% and 31% across the country’s two leading internet service providers – Airtel and TNM.

Announcing the reductions, MACRA stated that it was cognisant of affordability concerns raised by citizens and thus worked with telecommunications operators to “review and revise the current data prices more especially the lower volume bundles which are commonly used by the majority of internet users in the country.” 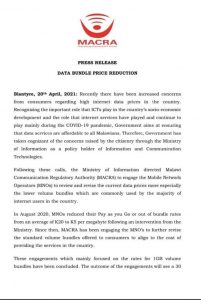 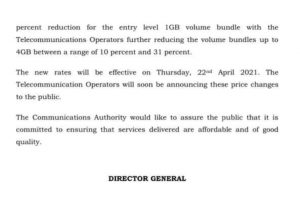 The new rates, which came into effect in April this year, cut across different validity periods – daily, weekly and monthly. In addition, Airtel Malawi has also removed the validity period for its 1GB PaNet NoVa, which is priced at MK3,500 (USD 4.40). Further, the reductions include packages for social media access and weekend access.

This is the second time in less than a year that data prices have  been reduced in Malawi. Last August, telcos reduced data prices in response to a joint statement by the Centre for Human Rights and Rehabilitation (CHRR), the Collaboration on International ICT Policy for East and Southern Africa (CIPESA), and other organisations urging the Malawi government to review the cost of telecommunications services, especially in view of Covid-19 restrictions some of which have led to increased reliance on digital technologies in Malawi and across the world.

At the time, MACRA agreed with CHRR, CIPESA and others that the cost of the internet in Malawi was too high. The regulator committed to engaging with telcos to explore further possibilities for data cost reduction. Since then, the regulator reports having been engaging telcos “to further review the standard volume bundles offered to consumers to align to the cost of providing the services in the country.”

Malawi is currently ranked 174 out of 189 countries on the United Nations Development Programme’s  Human Development Index, which measures a country’s average achievement in key dimensions of human development. An estimated 71% of Malawians live in extreme poverty. Malawi has one of the lowest mobile and internet connectivity rates in the world, owing to socioeconomic factors but also due to policy gaps that have contributed to the high cost of the internet and limited investment in critical infrastructure that could spur connectivity, especially in rural areas where the majority of Malawians live.

According to the 2019 National Household Survey on Access and Usage of ICT Services in Malawi, mobile phone ownership at household and individual level was at 36.5% and 43.2% respectively. During the same period, internet penetration stood at 14.6%, of which 40.7% of users were in urban areas while 9.3% were in rural areas. The majority of internet users (96.8%) accessed the internet via mobile phones compared to 11.8% who connected via a laptop or a desktop computer. The survey revealed that poor quality of service, affordability, and literacy were among the factors inhibiting greater access to and use of the internet. Indeed, compared to its regional counterparts, Malawi scores lowly on the 2020 GSMA Mobile Connectivity Index, which measures the key enablers of mobile internet adoption in various countries.

The recent reductions are commendable efforts towards improving access to the internet for all citizens including disadvantaged and marginalized groups of the population, by improving affordability. They reinforce the interventions of the Universal Service Fund (USF), whose aims include providing universal access “in areas that are not economically viable or that are marginally viable without subsidies.”

However, other barriers to access such as the prevailing taxation regime need to be addressed in order to more meaningfully enable affordability for the majority of Malawians. Furthermore, it is essential to ensure a competitive environment through quality of service and compliance monitoring of dominant operators and removing barriers for licensing new market entrants. As stated by the GSMA in the Inclusive Internet Index 2020 report, “the country’s efforts to extend internet access are stymied by weak communications market competition [and] high prices for data.”

Next: Charting the Link Between Disinformation, Disruptions, Diseases and the Diaspora in Cameroon and DR Congo