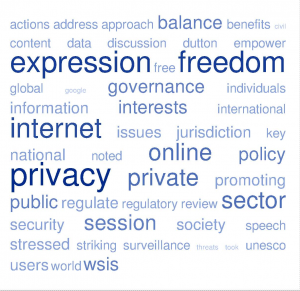 Striking a balance between freedom of expression and privacy on the internet was the focus of a panel discussion at a review of one decade after the World Summit of the Information Society (WSIS). The WSIS+10 Review meeting took place at the UNESCO headquarters in Paris, France, February 25-27, 2013.

The session built on earlier discussions held at the 7th Internet Governance Forum (IGF) in Baku, Azerbaijan on promoting both freedom of expression and privacy on the internet. It also drew from the Global Survey of Internet Privacy and Freedom of Expression – a UNESCO 2012 publication – which highlights a diverse international regulatory landscape, and the challenges posed by discrepancies in laws pertaining to the online and off-line spheres, and between national and international jurisdictions.

During the session, Pranesh Prakash from the India-based Center for Internet Society stressed the need for more relaxed regulations to govern the conduct of the private sector. He noted that “one must give the private sector enough leeway to safeguard them from responsibility for users’ actions and the requirement of taking down reasonable speech.” However, he added that the commercial sector has divergent interests and they do not necessarily align with public interests.

According to him, differing public and private sector interests coupled with unenforceability of self-regulation mechanisms and the jurisdictional issues of the internet mean that the conflict between freedom of expression and privacy cannot be easily resolved through public policy options that are only aimed at the private sector.

Patrick Ryan, a Policy Counsel from Google who was also a panelist, argued that the move to the “cloud” brings with it both enhanced privacy and security benefits, while at the same time putting data  potentially at risk. Noting that government surveillance remained one of the biggest threats to privacy, he stressed that the private sector needs to share more information on government take down requests that violate individuals’ privacy and free speech.

Meanwhile, William Dutton, a professor of Internet Studies at Oxford Internet Institute, stressed the importance of recognising the power of the internet in empowering networked individuals and enabling freedom of expression, like never before. He cautioned that if nations do not approach the issue of striking a balance between freedom of expression and privacy appropriately, some of the key benefits of the internet may be lost. He noted that whilst some nations have taken progressive steps, many others are moving in the wrong direction and various global policy choices are increasingly restricting freedom of expression.

Indeed, this has been illustrated by worldwide trends towards more content filtering and censorship. Dutton said adopting inappropriate models for internet governance and regulation, such as disproportionate levels of surveillance in the name of security, reliance on intermediaries to regulate content, and assertion of national sovereignty and jurisdiction in the online world are threatening privacy and freedom of expression.

Key recommendations from this session were: avoiding a moral panic over privacy; creating widespread awareness of issues concerning privacy and data protection among users especially the young generation; updating policy and regulatory frameworks that address freedom of expression and privacy online; and having a clear definition on national security interests.