Only a small fraction of requests made by law enforcement officials to Facebook, Google and Twitter for users’ identities or to block content originate from Africa, but there is cause to worry.
Facebook, whose popularity across Africa is growing exponentially, lists Botswana, Egypt, Ivory Coast, South Africa, and Uganda among the countries that requested users’ details in the first half of 2013. Meanwhile, last year saw seven African countries ask Google to remove content compared to only one request from the continent – by Libya – in 2010 and 2011. The beauty is that most of those requests were rejected.
No African country made a request for user account information either to Google or Twitter in the first half of 2013.
Facebook
In the first half of 2013, Botswana made three requests to Facebook related to seven users.  Egypt had eight requests regarding 11 accounts, the Ivory Coast lodged four requests, Uganda one request and South Africa 14 requests on nine users. All requests from Africa were denied.
Table 1: Facebook Data Requests (By Author from Facebook Global Government Requests Report)

Google
Eight African countries have made at least one content removal request to Google since 2010. Djibouti’s 2012 request to block YouTube videos containing the movie Innocence of Muslims on the grounds of “religious offense” was rejected. But a similar request by Egypt was temporarily complied with, because of the “difficult circumstances” in this country at the time.
Meanwhile, a Kenyan request to remove content from blogger, arising out of a court order in a defamation case, was rejected. The Island nation of Mauritius made two content removal requests in the first half of 2012. Both were for reasons of defamation; both were rejected. Madagascar’s two requests were court-mandated on defamation grounds but Google accepted only one. Sierra Leone made one request regarding 60 items on Youtube which it wanted blocked as they portrayed or promoted violence. Google declined the request, which was made by executive not court order.
In the first half of 2012, South Africa had three court-ordered removal requests related to 11 items and Google fully complied. In the second half of 2012, Pretoria made three court ordered requests related to eight items and 33% was complied with. All South African requests were related to defamation.
Previous Google reports show that in the period July – December 2010, Libya made 68 requests for a total of 203 items to be removed from Youtube. Of these requests, 31% were complied with, either by some or all of the content being removed. In the subsequent six months, Libya’s two requests regarding five items were denied. All of Libya’s requests were not backed by a court order
Twitter
South Sudan, the continent’s youngest nation, is the only African country that made a user information request to Twitter between July and December 2012. Juba’s request was denied.

A Catalogue of Infringements
While only a handful of African countries are making these requests, there is nonetheless evidence of a worrying trend, in which African countries are taking both legal and non-legal measures to curtail the freedoms of individuals to express themselves on the internet.

The last year has seen a spiral of activity against online freedom of expression in numerous African countries. In fact, 2013 might go down as a record year in terms of curtails on internet rights on the continent.
Gambia has passed a law under which those who publish “false news” online about the government can be handed a 15 year jail term and fined up to US$90,000. Meanwhile, Zambia president Michael Sata’s government in July blocked access to the Zambian Watchdog website, accusing it of promoting hate speech. Two journalists arrested on suspicion of working with the online publishers were due to appear in court. Another website, Zambia Reports, was blocked too. Some observers said blocking the websites was part of the government’s campaign to silence independent critics.
Next door in Zimbabwe, security agencies spent several weeks in the run-up to the July 2013 general elections looking for ‘Baba Jukwa’, whose Facebook page published popular exposes of the excesses of President Robert Mugabe’s government. Three weeks before election day, there were reports Mr. Mugabe’s machinery had staked a US$300,000 bounty to unearth the identity of the whistleblower as it moved to block access to the site.
There have also been cases of bloggers charged in court in Kenya and others sought by authorities over their Facebook, blogger and Twitter posts, amidst concerns that authorities were infringing citizens’ right to free expression. The country also asked internet intermediaries to monitor their traffic for messages deemed “inflammatory” or “divisive” in a move some observers believed could be an invasion of privacy. Kenya has also ordered the blocking of access to some websites, such as Mashada.
Burundi – always a high-flying culprit in clamping on free expression – in May ordered the online newspaper www.iwacu-burundi.org to block readers’ comments for 30 days, after accusing it of publishing comments that violated media law on “national unity, public order and security, inciting ethnic hatred, defending criminal activity and insulting the head of state.”
Perhaps more than any other country in Africa, Ethiopia regularly blocks websites, undertakes surveillance of websites and social media, and charges journalists over content published offline and online. In May 2013, the Supreme Court upheld the conviction and 18-year prison sentence for journalist and blogger Eskinder Nega, convicted last year of “terrorism acts” related to his writing. The state-run telecom monopoly Ethiopia Telecom has for many years been used to filter content and hundreds of websites remain blocked. These include blogs and websites of a number of recently convicted individuals, news organisations, political parties, bloggers, and international organisations.
In Uganda, where authorities have in the past ordered internet service providers to block access to certain websites and services, the government announced it would form a social media monitoring center “to weed out those who use this media to damage the government and people’s reputations” and also targeted at those “bent to cause a security threat to the nation.” Many other countries on the continent have variously interfered with citizen’s internet rights – many times unjustifiably.
The number of requests made by African countries is therefore not reflective of the state of online freedom on the continent. This is because most governments have unilateral means of dealing with situations they do not like, without going through multilateral intermediaries. As we are witnessing, they can enact national legislations, issue uncontested orders to local intermediaries, or use extra-legal measures.
With more people on the continent getting online (mobile penetration in Africa stands at 63%, internet usage at 16% of the population), governments are likely to infringe more on citizens’ online freedoms. A challenge then is to promote awareness about protecting and promoting online freedoms. There is also a need to continuously promote responsible user behaviour online, as not all state efforts to monitor citizens’ actions online are unjustifiable.
Download the full OpenNet Africa Brief here.
To learn more about CIPESA’s OpenNet Africa project and its monitoring of online freedoms, or to share an idea or report a violation, write to: [email protected]. 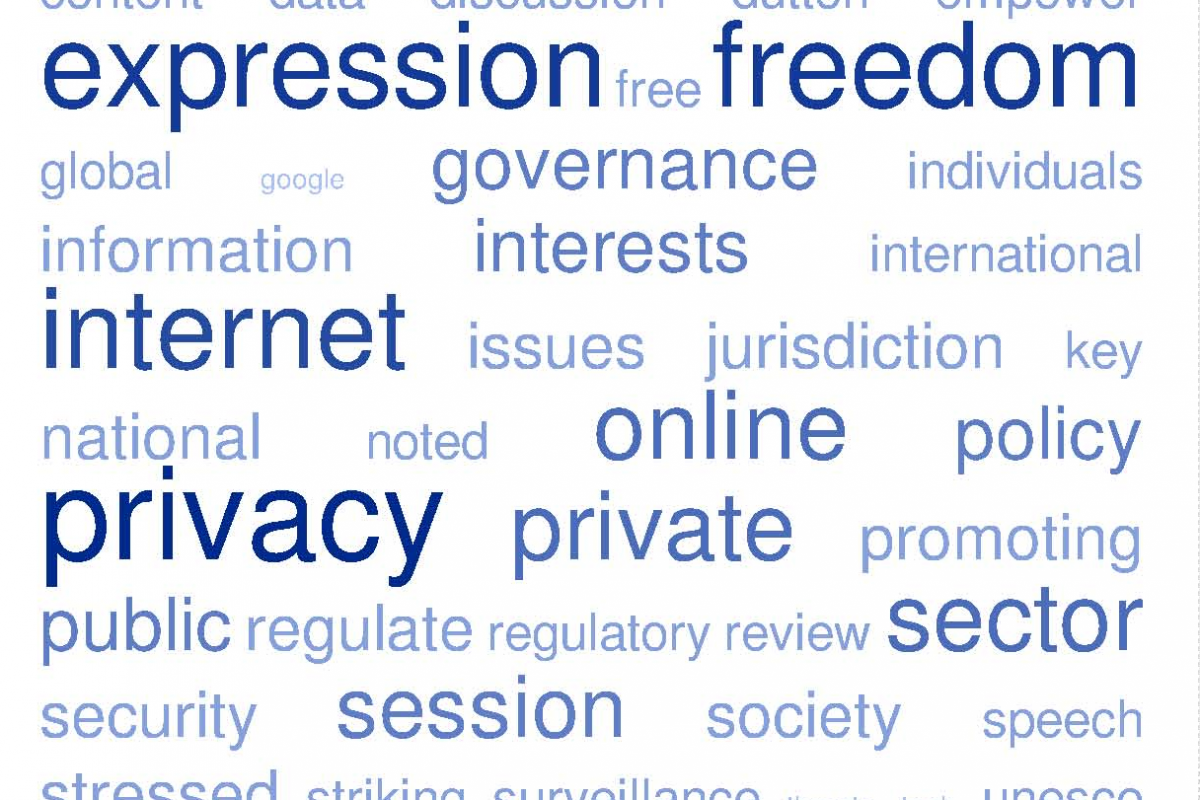 Striking a balance between freedom of expression and privacy on the internet was the focus of a panel discussion at a review of one decade after the World Summit of the Information Society (WSIS). The WSIS+10 Review meeting took place at the UNESCO headquarters in Paris, France, February 25-27, 2013.
What convergences and tensions exist between freedom of expression and privacy online? What are the implications of approaching the balance between free expression and privacy from a freedom of expression–centric point of view? What actions can governments, civil society, media and the private sector take to balance privacy with freedom of expression online? And what is the best way to empower users? These are some of the questions addressed at the session on ‘Promoting of Freedom of Expression and Privacy Online’. CIPESA’s Lillian Nalwoga was the remote moderator for the session.
The session built on earlier discussions held at the 7th Internet Governance Forum (IGF) in Baku, Azerbaijan on promoting both freedom of expression and privacy on the internet. It also drew from the Global Survey of Internet Privacy and Freedom of Expression – a UNESCO 2012 publication – which highlights a diverse international regulatory landscape, and the challenges posed by discrepancies in laws pertaining to the online and off-line spheres, and between national and international jurisdictions.
During the session, Pranesh Prakash from the India-based Center for Internet Society stressed the need for more relaxed regulations to govern the conduct of the private sector. He noted that “one must give the private sector enough leeway to safeguard them from responsibility for users’ actions and the requirement of taking down reasonable speech.” However, he added that the commercial sector has divergent interests and they do not necessarily align with public interests.
According to him, differing public and private sector interests coupled with unenforceability of self-regulation mechanisms and the jurisdictional issues of the internet mean that the conflict between freedom of expression and privacy cannot be easily resolved through public policy options that are only aimed at the private sector.
Patrick Ryan, a Policy Counsel from Google who was also a panelist, argued that the move to the “cloud” brings with it both enhanced privacy and security benefits, while at the same time putting data  potentially at risk. Noting that government surveillance remained one of the biggest threats to privacy, he stressed that the private sector needs to share more information on government take down requests that violate individuals’ privacy and free speech.
Meanwhile, William Dutton, a professor of Internet Studies at Oxford Internet Institute, stressed the importance of recognising the power of the internet in empowering networked individuals and enabling freedom of expression, like never before. He cautioned that if nations do not approach the issue of striking a balance between freedom of expression and privacy appropriately, some of the key benefits of the internet may be lost. He noted that whilst some nations have taken progressive steps, many others are moving in the wrong direction and various global policy choices are increasingly restricting freedom of expression.
Indeed, this has been illustrated by worldwide trends towards more content filtering and censorship. Dutton said adopting inappropriate models for internet governance and regulation, such as disproportionate levels of surveillance in the name of security, reliance on intermediaries to regulate content, and assertion of national sovereignty and jurisdiction in the online world are threatening privacy and freedom of expression.
Key recommendations from this session were: avoiding a moral panic over privacy; creating widespread awareness of issues concerning privacy and data protection among users especially the young generation; updating policy and regulatory frameworks that address freedom of expression and privacy online; and having a clear definition on national security interests.
For more information, please visit – https://www.unesco-ci.org/cmscore/events
Promoting of Freedom of Expression and Privacy Online
Follow WSIS+10 on twitter at #WSIS