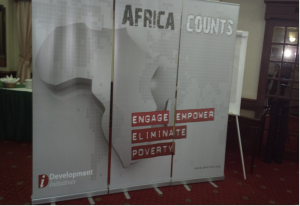 Open Data for improved resource allocation and effective service delivery in Uganda was the theme of the latest Africa Counts roundtable held in Kampala, Uganda on March 13, 2013. Organised by Development Initiatives (DI) and Development Research and Training (DRT), it was the fourth in a series of forums aimed at increasing opportunities for “cross-country, cross-sector and multi-stakeholder” engagements that involve citizens in decision making processes on development issues across East Africa.

The forum explored avenues through which open data can be leveraged to influence resource allocation and effective delivery of public goods and considered potential challenges to the operationalisation of an open development platform in Uganda and possible means of dealing with them. Furthermore, it argued the case for the inclusion of ‘open data’ as a stand alone goal in the post-MDG agenda. 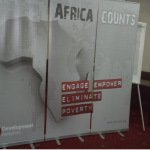 DRT’s Paul Onapa commended the government of Uganda for having in place constitutional guarantees to the right to information, as well the Access to Information Act of 2005.

However, he said, despite having a robust legal framework, access to public information remained limited. “Public data and information management schemes are still largely paper based (available in bulky hard copies and/or online PDFs) and largely aggregated. In addition, this information is scattered in various government departments and only available to a few with adequate contacts,” said Onapa.

He added that open data, with its foundation modelled on digital technology and the internet, offers an opportunity to create a “one-stop portal/platform” where citizens can access, download, and analyse information on matters that affect them, particularly basic services and issues of value for money. With this knowledge, citizens can then meaningfully participate in improving public services.

His remarks were supported by Al Kags of the Open Institute, who stated that a “switched on, participating citizenry” is key to the success of open data as a mechanism for transparency and accountability. The Open Institute has been involved in open government initiatives in Kenya, such as Code4Kenya and africaopendata.org.

Panellists Professor Abel Rwendeire of the National Planning Authority and Margaret Kakande from the Ministry of Finance, Planning and Economic Development) acknowledged the potential of open data to ensure effective resource allocation and service delivery. However, Kakande pointed to a number of challenges being faced by government bodies in embracing open data, such as a lack of legal frameworks on data disclosures.

Edward Ssenyange of the Democratic Governance Facility (DGF) and CIPESA’s Lillian Nalwoga highlighted ways in which citizens’ participation in open data initiatives can be enhanced: placing emphasis on capacity building in the use of ICTs, robust multi-stakeholder engagement (particularly with mainstream media), advocating for key government institutions’ commitment to openness, authenticity and relevance of data.

Currently, a civil society led Open Data platform has been created by the Uganda Open Development Partnership (see OpenDev.Ug and Data.Ug). A key objective is to share development information – on agriculture, education, health, roads sub-sector, etc – and on financial flows including all resource flows to Uganda (aid, domestic revenues, humanitarian assistance, remittances, etc). Making the information accessible and useable by various stakeholders – citizens, government officials, donors, civil society, media and private sector is another objective. CIPESA and DRT are among the founders of the Uganda Open Development Partnership.

Outcomes of the Kampala forum will be used to develop targeted messages to inform policy and to stimulate public demand for openness in the conduct of data/information sharing in Uganda.