One Year into his Reign, Burundi’s President Evariste Ndayishimiye has a Mixed Media Freedom Record 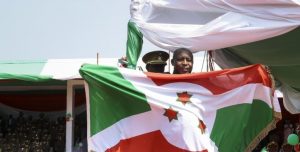 A year into his presidency, Evariste Ndayishimiye has posted a mixed scorecard for media freedom in Burundi. Having experienced harsh restrictions under Ndayishimiye’s predecessor, the late Pierre Nkurunziza, there was optimism among media practitioners and activists that once sworn in, Ndayishimiye would usher in progressive reforms in the country.

Since taking office on June 18, 2020, Ndayishimiye has actively engaged the media, leading to the lifting of some sanctions. Notable actions have seen the pardon of jailed journalists, lifting of bans against online publishers such as Iwacu, Isanganiro and Ikirihoo as well as broadcasters including the BBC and Radio Sans Frontières Bonesha (RSF Bonesha). However, these have only been partial reliefs as many independent media houses remain banned, while the culture of self-censorship and civil society oppression prevails.

A History of Repression

In May 2015, Nkurunziza’s bid for a new term in office triggered contestation, with opposition parties and civil society organisations protesting against what they considered an unconstitutional third term in office. The ensuing public demonstrations led to a deadly political crisis, with widespread reports of police brutality, physical destruction of radio and televisions stations, and the arrest of several journalists. The events were preceded by a government order to Internet Service Providers (ISPs) to block access to social media platforms such as Facebook, WhatsApp, Twitter, and Viber.

Nkurunziza eventually had his way and won the 2015 elections, after which he set upon systematically shrinking civic space. The period until his death in June 2020 saw an escalation in the crackdown on independent media and journalists, both offline and online, forcing many to flee to exile.

In July 2016, Jean Bigirimana, an independent online journalist, went missing and his whereabouts remain unknown. Witness testimonies allege that Bigirimana was abducted by officials of Burundi’s national intelligence services. Although authorities have denied any involvement in Bigirimina’s abduction, further reports indicate that his family received death threats, forcing his wife and children to flee into exile.

As of October 2017, access to the websites of independent local news publishers http://www.iwacu-burundi.org, http://www.isanganiro.org, and http://www.ikiriho.org was blocked from within Burundi except through use of circumvention methods. Isanganiro’s radio station and Iwacu’s weekly print newspaper remained operational and in circulation, respectively. The management of Iwacu contacted the National Communication Council (CNC) as well as the telecommunication regulatory authority regarding the website blockage, but the authorities denied responsibility, arguing that it could be a technical issue at the Internet Service Provider level. In order to keep its services accessible, Iwacu set up an alternative website (https://iwacu.global.ssl.fastly.net/). Meanwhile, a letter from Ikiriho to the CNC requesting for its website to be unblocked went unanswered.

In May 2018, the CNC issued warnings to Radio Isanganiro, Radio CCIB FM+, and Radio France Internationale, and suspended the licenses of the BBC and Voice of America (VOA) for six months on allegations of not verifying sources and broadcasting unbalanced news. Months later in October 2018, the government suspended the operations of international non-governmental organisations, accusing them of violating the 2017 General Framework for Cooperation between the Republic of Burundi and Foreign NGOs, which requires recruitment of national staff by ethnic quotas.

On the legislative front, on May 11, 2018, Nkurunziza assented to a new interception of communications law, with sweeping powers granted to government agencies carrying out investigations to intercept electronic communications and seize computer data. The law was passed within two weeks of first being tabled –  in contravention of the constitution.

Meanwhile,  YouTube block in Burundi was documented by the Open Observatory of Network Interference during December 2019 without official explanation. Leading up to the alleged restriction on YouTube, the Burundian government suspended the comments section on the YouTube channel of Nawe, an independent media outlet, and prohibited new channel uploads. Initially, Nawe’s website and Twitter remained active but both have been inactive since August 2020. Moreover, Nawe is no longer listed among CNC’s licensed online media houses.

The onset of the Covid-19 pandemic presented even bigger challenges. In May 2020, Burundi expelled officials of the World Health Organisation for challenging the country’s Covid-19 response, amidst a looming election. Whereas the country reported some Covid-19 statistics, there was criticism of under-reporting and gagging of civil society and health workers.

Under the new head of state Ndayishimiye, who won the 2020 polls by 67%, the repression has eased somewhat. Four Iwacu journalists were released from prison in December 2020 by way of a presidential pardon after serving 14 months of a two-and-a-half year jail sentence for “complicity in undermining state safety.” The charges related to coverage of clashes between the Burundian army and militia from neighbouring Democratic Republic of Congo. Prior to their release, various organisations, including the Committee to Protect Journalists (CPJ), had petitioned Ndayishimiye, arguing that the four journalists’ conviction was unjust.

In another positive development, Ndayishimiye held a dialogue with Burundi journalists in January 2021, during which he said that the media are a strong pillar for democracy and development and urged the country’s media regulatory body CNC to urgently engage with media houses that were banned or sanctioned to explore possible reopening.

Following the president’s directive, the CNC invited Léandre Sikuyavuga, Editor-in-Chief of Iwacu, for a meeting on February 11, 2021. Sikuyavuga was informed that the CNC was in talks with the relevant technical service providers to reinstate access to the Iwacu website in Burundi. The ban on the discussion forum of the website, which was imposed back in April 2018, was also revoked. However, at the time of writing, Iwacu remains inaccessible within Burundi.

Also in February, the President of the CNC held a press conference during which he announced the end of all restrictions against RSF Bonesha FM. The broadcaster was one of the independent radio stations destroyed in 2015 and its operating license was indefinitely revoked in 2017. Within four days of the press conference, the station resumed broadcasting. While expressing his joy at the lifting of the sanctions, Leon Masengo, the Director of Bonesha FM, said a lot of their equipment was destroyed in 2015, but the station would start airing in the capital Bujumbura initially and later countrywide once the necessary equipment was replaced. The estimated cost of replacing the damaged equipment was USD 60,000.

More recently, on June 16, 2021, the CNC lifted the ban on Ikiriho and the BBC. In order to resume operations, the BBC is required to apply for a new license. For its part, Ikiriho immediately resumed operations including posts via its Twitter account which had been dormant since October 2018. However, its website remains inaccessible.

Further, more than 70 journalists who fled the country during the 2015 crisis for fear of their lives are still living in exile as reported by the Le Monde. Meanwhile, self-censorship and civil society repression persists.

The Next Four Years

In order to rejuvenate the media landscape and civic space to its dynamism prior to 2015, Ndayishimiye must show commitment to uphold media and internet freedom by unconditionally lifting bans on all media houses, including granting amnesty to all journalists currently living in exile. The practice reforms should be matched with policy reforms including amendments to laws that grant undue powers to authorities to conduct unwarranted surveillance and censorship. Ndayishimye should also desist from interrupting access to the internet and social media.

Previous: Data Protection Law on the Horizon in Malawi