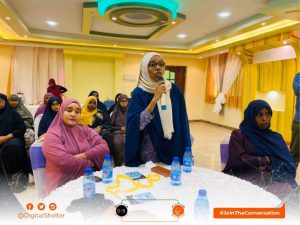 Somalia had recorded steady growth in telephone penetration – with 7.6 mobile subscribers. However, internet penetration remains low – 2% as at 2017, according to the International Telecommunications Union (ITU). The adoption of technology has expanded civic space in the post conflict era, with social media platforms and blogs empowering journalists, activists and human rights defenders to document and report human abuses, mobilize public opinion, campaign for reforms, share relevant content and information, and build networks at national and global level.

However, the past three years have seen a rise in threats against online freedom of expression, such as the arrest and intimidation of several journalists and social media campaigners for comments posted on social media. There are reports of dissenting social media accounts being hacked, while others have deactivated their accounts due to fear of attacks. A culture of censorship prevails, amidst a rise in sponsored trolls spreading misinformation and propaganda to counter factual narrative reported by journalists, human rights defenders and activists online.

It is against this background that Digital Shelter hosted a panel discussion on the shrinking online civic space in Somalia and the growing digital threats faced by media professionals, bloggers and human right defenders in the digital space on February 13, 2020. The event was part of series of activities under the theme “Protect our Online Space”, supported by the Africa Digital Rights Fund (ADRF) – an initiative of the Collaboration on International ICT Policy for East and Southern Africa (CIPESA).

Among the panelists was Mohamed Irbad, a prominent blogger and researcher known for his critical writings on governance, human rights, freedom of expression and censorship on social media platforms. In early 2019, after publishing an article titled “Media Censorship In Somalia: A Nation Risk Into Information Darkness” on his personal blog, Mohamed faced serious online and physical threats which forced him to flee the country for six months due to fear for his safety.

“All critical voices, particularly individuals who are based inside Somalia have been silenced with online and physical threats altogether. For instance, when your raise critical issue on Twitter or Facebook you have two options, you either end up battling with anonymous trolls in their hundreds by answering to their toxic comments or you feel intimidated and sacred of writing about certain issues, hence, your remain silenced . And that is exactly what happened to me after writing that article. And therefore, it is fair to stay that we are witnessing the worst shrinking of our online/offline civic and democratic spaces” Mohamed Irbad.

Also speaking at the event was Hassan Ali Osman, a journalist, with the New Humanitarian newsletter. Hassan actively uses Twitter to disseminate local and international news as it breaks for his 90,000 followers. He shared that he has been constantly attacked by trolls merely because of reporting the truth on social media platforms.

Highlighting the issue of online violence against women was Sucdi Dahir Diriye, a passionate community volunteer and member of CaawiWalaal loosely translated as “HelpYourBrother” –  a digital campaign launched three years ago to support local communities affected by droughts in Somalia. As in most of the world, the internet has provided a platform for Somali women to amplify their voices. However, it has also enabled perpetuation of different forms of online violence against women including harassment, doxing, threats, stalking and blackmail, sometimes leading to physical violence. The targets of these attacks are women that are vocal on issues such as gender equality, sexual violence, free expression, or challenging the patriarchal structure of the society. This has created a hostile online environment for women and girls in Somalia, fraught with shaming, intimidation and degrading, leading to withdraw of from the online space.

As part of her work, Sucdi documents cases of online blackmailing and extortion against young girls in Mogadishu and other regions of Somalia. She stated that limited recognition of the existence of online violence and harassment against women in Somalia is allowing the abuse to continue inexorably. Relevant policies to address online violence against women need to be put in place and more women and girls need to be skilled in digital safety and security.

Based on their personal and professional experiences, the panelists stressed the need for counter measures against the prevailing threats. Among the recommendations made was increased digital security skills and knowledge building among activists, bloggers and media professionals. Specialized training on gendered online harassment was encouraged. Panelists also emphasized a dual approach in voice amplification – online and offline to reach wider audiences.  Furthermore, more stakeholder dialogue to raise awareness on online civic space and digital rights, including data protection and privacy inline with Somalia’s growing technology sector. Other recommendations included research undertakings on current digital threats in Somalia, to inform advocacy and policy interventions; and establishment of a solidarity network to support victims of online attacks.

“Digital Shelter is proud to be in a unique position to amplify voices in the most difficult time where the online civic space is shrinking in Somalia”, said Abdifatah, co-founder of Digital Shelter in the closing remarks of the forum.

Digital Shelter continues its “Protect our Online Space” drive during March 2020 with series of trainings on digital security. Digital Shelter is also planning to host other forums on expanding online civic space in Somalia.

This article was first published by the Digital Shelter on March 04, 2020

Previous: Malawi’s Democracy and Digital Rights Record to be Spotlighted by the Human Rights Council of the United Nations

Next: Building a Robust Data Protection Regime in Senegal