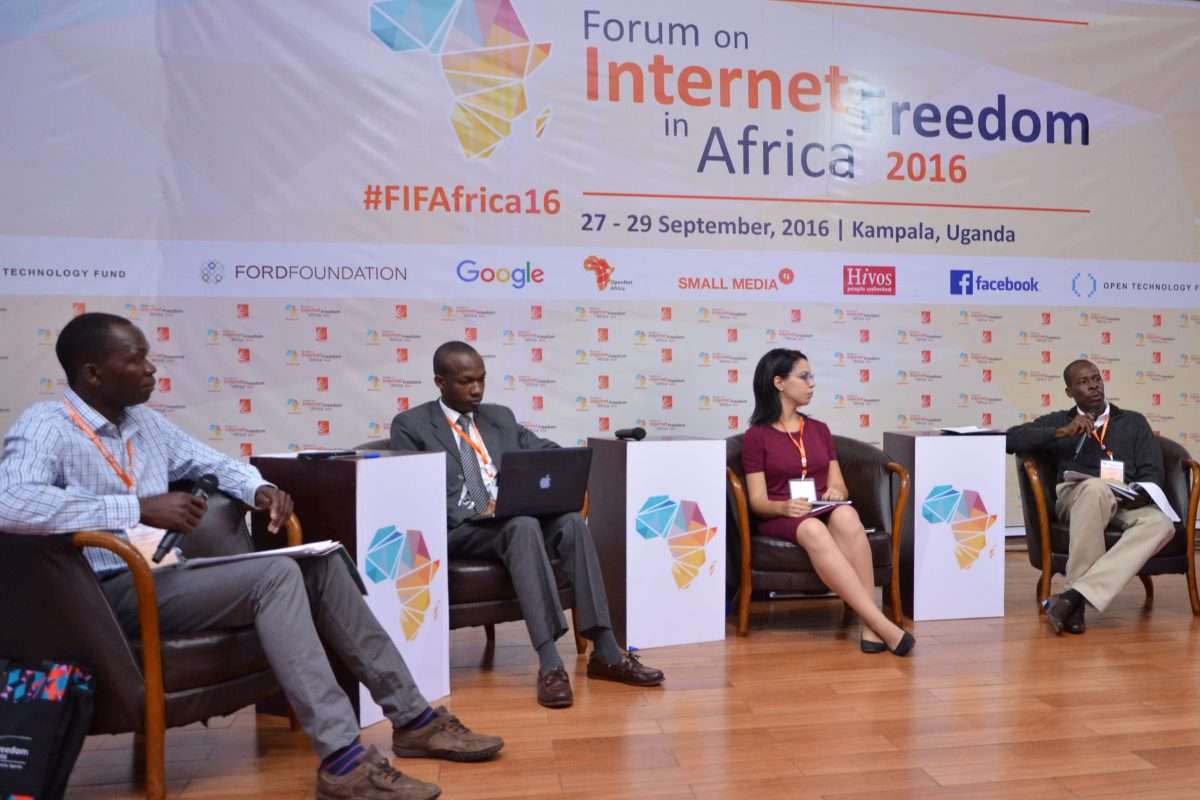 Tweet
By Tefo Mohapi |
In October 2016, Ethiopia declared a state of emergency which saw it impose certain measures that included telecommunications, media and Internet shutdowns along with travel restrictions on diplomats and a dusk-to-dawn curfew, to name a few of the measures implemented. The state of emergency, effective from 08 October 2016, comes as a result of about five hundred people being killed in protests in the Oromiya region surrounding the capital Addis Ababa and other parts of Ethiopia since 2015. This is, as reported, after anger over a development scheme for the capital sparked broader anti-government demonstrations over politics and human rights abuses.
Ethiopia is not new to Internet shutdowns with another Internet shutdown taking place as recently as July 2016 with the government stating that it took this drastic measure to prevent leakages during the national exams.
Internet Shutdowns Across Africa
At the recently held Forum for Internet Freedom in Africa 2016 in Kampala, Uganda a panel on the opening day discussed “Internet Shutdowns and Internet Rights” and asked the pertinent question – “Where do we draw the line?”

In 2016 alone, the panel noted, Africa has experienced Internet shutdowns or social media bans in several countries including Zimbabwe, Uganda as well as Ethiopia. Notably, these shutdowns or bans typically revolved around political unrest or elections.
Furthermore, as noted during the discussion, Internet shutdowns can cost a country’s economy quite a substantial amount of money with the 2016 Uganda Internet shutdowns rumored to have cost the country $26 million considering it also involved the shutdown of mobile money services for several days around the 2016 Ugandan Presidential election period.

$500,000 A Day
Technically speaking, and as witnessed across different countries in Africa and as discussed on the panel, an Internet shutdown usually involves a government’s ministry typically issuing a letter or instruction to the telcos and mobile service providers operating in that country requesting they cut off Internet access completely (or specific services) to their customers.
In Ethiopia, it is even easier for the government to effect an Internet shutdown as the East African country has only one telecommunications company, Ethio Telecom, which is also state-owned and the only provider of Internet access in the country. This further raises the question of who should be entrusted with provision open and unfettered Internet access to citizens. That’s just the tip of the proverbial iceberg, as Internet shutdowns come with a cost to a country’s economy. Continuing with Ethiopia as a case study, is perhaps the impact and cost of the Internet shutdown exaggerated given that the country only has an Internet penetration rate of 2,9% (as per 2015 Freedom House Report)?

Ethiopia Feedom of the Net 2015 Report

A recent report released on 27 October 2016 by the Global Network Initiative along with Deloitte suggests that the current ongoing Internet shutdown in Ethiopia is costing the country approximately $500,000 a day. The report explains that, in dollar terms, it is estimated that for the average highly-connected country, the per-day impact of a complete Internet shutdown would amount to US$23.6 million per 10 million people. For the average country with medium and low levels of connectivity, the estimated GDP impact amounts to US$6.6 million and US$0.6 million per 10 million people, respectively.

“This analysis suggests that the ongoing Internet shutdown in Ethiopia, a low-connectivity country with a population of 94 million and a per capita GDP of US$505, is costing its economy just under half-a-million US dollars a day in lost GDP. “The economic impact of disruptions to Internet connectivity 2016 Report

The report sheds light on the impact on Internet shutdowns and illustrates that irrespective of low Internet penetration rates in country’s like Ethiopia, the impact is still quite high given how the Internet is used in various economic activities.
Furthermore, it is encouraging to hear the United Nations Human Rights Committee condemn Internet shutdowns in their recent resolution.
The United Nations Human Rights Council stated that it condemns unequivocally measures to intentionally prevent or disrupt access to or dissemination of information online in violation of international human rights law.” Specifically calling on all States to “refrain from and cease such measures.”
This article was first published at iafrikan on October 28, 2016.

By APC |
“A fundamental challenge in need of urgent resolution in the digital age is how to protect human rights and freedoms on the Internet, and the African continent is no exception.” This is the introduction to the African Declaration on Internet Rights and Freedoms, an initiative joined by a diversity of organisations and individuals from the region to protect human rights in the context of the internet and digital technologies.

By Ashnah Kalemera |
Two years since launching a project to provide high quality broadband through shared fibre infrastructure in Uganda, Google has now officially launched the WiFi based Project Link in the Ugandan capital, Kampala.
The internet giant has set up WiFi radios and supporting infrastructure at 120 locations within the city to provide citizens and small media businesses (SMEs) with high speed, affordable and reliable internet services “on the go” and at home.
The initiative aims to help local providers access high-capacity networks at a lower cost due to the opportunity to share infrastructure rather than construct their own. In partnership with the Kampala City Council Authority (KCCA) and property services companies among others, Project Link WiFi services are available at shopping malls, sports grounds, apartment complexes and office blocks.
“Google built the network and access points. We operate and monitor it,” said Ela Beres, a Google official. The ISPs and MNOs participating in the project are responsible for the quality of service, determining pricing and providing support to end users.
As at June 2015, Uganda had 36 licensed public service providers for voice and data services. Internet penetration stood at 37% and telephone penetration at 64%. In 2014, the country was ranked 15 out of 51 countries surveyed in the global internet affordability index. The index measures the affordability of internet access in each country as influenced by the extent of infrastructure deployment, adoption rates and existing policy and legislative frameworks.
According to Suzan Kitariko, Google Uganda Country Manager, since its launch in November 2013, Project Link has seen the laying of 800 kms of broadband fibre in Kampala and the surrounding areas of Entebbe and Mukono. This has enabled 13 local ISPs and mobile network operators to provide high quality broadband to an estimated two million people.
“Google Infrastructure has allowed us to focus on our core competences and cut on capital expenditure, thus reducing costs to benefit the consumer,” said Roger Sekaziga of Roke Telkom, one of the project’s partners. Roke Telkom has deployed unlimited Wifi spots at select restaurants and bars at speeds of up to 1mbs for UGX 18,000 (US$ 5) per month or UGX 1,000 (US$ 0.30) per day.
Speaking at the launch which was held at the Protea Hotel on December 3, Uganda’s Minister of Information and Communication Technology (ICT) John Nasasira said improved access to reliable and affordable broadband connectivity had the potential to positively impact Uganda’s health, education, agriculture and business sectors. He added that it would also contribute to government-citizen engagement. Nasasira called for more public-private partnerships in telecommunications infrastructure development to “boost uptake and narrow the digital divide in the country.”
Meanwhile, leveraging on Project Link, panoramic views of tourist and leisure sites in Kampala are now available via Street View. Work is underway to extend coverage to national parks. Project Link is also supporting the regulator, Uganda Telecommunications Commission and KCCA to draft guidelines for infrastructure sharing for all licensed operators.
Over the coming months, Project Link is expected to expand WiFi access to 300 other locations across the country. Since launching its first metro-fibre network in Kampala in 2013, Project Link has expanded to Ghana in West Africa, where it expects to build 1,000 kms of metro fibre.

By Ashnah Kalemera |
This month, the Collaboration on International ICT Policy in East and Southern Africa (CIPESA) has given training to human rights defenders, journalists, bloggers and media practitioners in Tanzania and Uganda in safety and security tactics to promote privacy and freedom of expression online.
The training, conducted in Kampala on April 10 and in Dar es Salaam on April 14 and 15, also helped participants to understand the laws and policies governing digital communications in the two east African countries.
The trainings explored basic computer security for operating systems, data storage and software updates. In addition, safety and security tips for using social media such as Facebook and Twitter, email and mobile communications were shared. Strong emphasis was placed on ensuring privacy of these communication tools and creating strong passwords. The trainings also explored techniques for responding to surveillance and censorship using anonymous browser tools, Virtual Private Networks (VPN) and Encryption.
Participants in the two countries shared their experiences – with varying levels of expertise – in securing their communications.
“I do not share my laptop regardless of who you are,” stated one Ugandan participant. He added that he did not access his email on phone or at internet cafes, cautioning the participants who did. “Any email has to wait until I get to my encrypted laptop,” he said.
A Tanzanian journalist said that whereas she makes the effort to secure all her devices and online user accounts, she often used the same password across board. This highlighted the shortage of digital safety skills among some of the most regular users of digital technologies in the country.
Participants in both trainings noted that in some cases, civil society organisations were “lazy” in adopting the latest technology to ensure the safety and security of their operations and their staff online. In other cases, financial resources were a limitation. Another challenge highlighted was the slow internet speeds in both countries, hence forcing users to access the internet on several devices.
On the legal and regulatory front, discussions centered around the proposed Cyber Crime Bill in Tanzania and the Uganda Data Protection and Privacy Bill and the need for the two countries to adopt laws that support internet freedoms.
Participants also raised concern about recent developments in neighbouring Kenya and their potential impact on the use of information and communication technologies (ICT) across all member states of the East African Community.
Participants in both the Tanzania and Uganda trainings called for increased awareness of online freedom amongst internet users, particularly vulnerable groups such as women and youth to promote greater appreciation for the need to adopt safety and security practices online.
Overview of training beneficiaries
Individuals from 27 organisations benefited from the training, out of which an average of 33% were women and 67% were men.
Figure 1: Training beneficiaries by gender

The trainings were organised by CIPESA in partnership with the Pan African Human Rights Defenders Project and Jamii Forums in Uganda and Tanzania respectively in the context of CIPESA’s OpenNet Africa project supported by Hivos, the Open Technology Fund and the Association for Progressive Communications.
Upcoming digital safety skills engagements include for journalists in Uganda (to coincide with World Press Freedom Day on May 3) and for the local tech community.