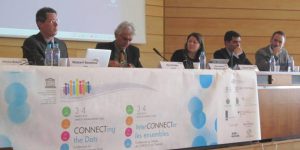 The United Nations Educational, Scientific and Cultural Organisation (UNESCO) in March 2015 published a draft study on internet-related issues that have the potential to advance online inclusivity. The study, titled ‘Keystones to Foster Inclusive Knowledge Societies’, explores how access to information and knowledge, freedom of expression, ethics and privacy are shaping use of the internet.

According to the study, balanced access to information and knowledge is hampered by filters on content, gender inequality, and limited access to technical tools and infrastructure required to obtain such information.

Meanwhile, freedom of expression globally is hindered by content filtering, regulation and in some instances severe criminalisation of online expression. Closely related to restrictions on online expression was the limited respect for the rights to privacy and data protection as fundamental online rights. The ethics of the internet, including ways through which it can be used to advance respect for cultural and other diversities, were also interrogated in the study.

The report calls for increased media and information literacy; balancing policies and practices on the conflict between freedom of expression and privacy; and reconciling global frameworks for addressing extra-territorial impacts of national censorship.

The study was based upon the crosscutting themes of UNESCO’s ROAM concept which incorporates a Rights based, Open Internet, which is Accessible to all and encompasses Multi-stakeholder participation.

The findings were discussed by representatives from civil society, academia, governments, the private sector, the technical community and inter-governmental entities at a meeting hosted at the UNESCO headquarters in Paris.

Speaking at the meeting, Alexandrine Pirlot de Corbion, Advocacy Officer at Privacy International, said the right to anonymity should be prioritised.  This sentiment was echoed at the African Internet Rights Meeting which also took place in March in Accra, Ghana where anonymity was raised as an important right to promote citizen participation, transparency, access to information and freedom of expression.

In East Africa, recent developments reflect mixed attitudes on online rights. Some clauses that curtail free press in Burundi have recently been invalidated, while Uganda is currently reviewing stakeholder input to a Data Protection and Privacy Bill. Rwanda, often accused of suppressing free expression, is reported as having the most affordable internet in the developing world, according to the Alliance for Affordable Internet.

Tanzania has recently presented to Parliament an Access of Information Bill and a Media Services Bill, and enacted a Cyber Crimes Act, criticised for negating freedom of expression and privacy, and giving excessive powers to law enforcement agencies.

Kenya has in recent months been plagued with reports of putting a chill on freedom of expression online. Particular focus has been on the Security Laws (Amendment) Act, 2014, which provides for surveillance and interception of communications by intelligence forces with limited judicial oversight.  The law was enacted as a means of combating terrorism in the country. Ironically, in 2014, Freedom House listed Kenya as one of only two African countries with internet and digital media freedom.

Indeed, as pointed out by Ayman Mhanna, Executive Director at the SKeyes Center for Media and Cultural Freedom during the March discussion of the UNESCO report, surveillance has been given legitimacy in regions of conflict and has also contributed to censorship of the media. He cited Lebanon where bloggers have faced punitive actions for comments posted online about public officials. The Middle Eastern country relies on a print media law dating back to 1962 – similar to Tanzania where outdated laws such as the Newspaper Act of 1976 are used to prosecute internet users including the media.

“There is need for more efforts to instill trust in privacy, security, and the authenticity of information and knowledge accessible online, and to protect the safety and dignity of journalists, social media users, and those imparting information and opinion in the online world,” states the UNESCO report.

The launch of the UNESCO study comes at a time when many countries across the world are still trying to address development challenges such as access to clean water, education and health. In many cases, ICT access has not received as much financial investment or political will to effectively drive its use particularly as a tool for good governance.

The study further encourages ethical reflection, research and public dialogue on the implications of new and emerging technologies and their potential social impacts by all governments particularly those in the developing world. Also at the Paris meeting, Anriette Esterhuysen, Executive Director of the Association for Progressive Communications (APC), called for inclusion of more civil society voices in internet governance processes to maintain a fair representation of the diversity of internet users globally.

With a series of other recommendations made in the Paris meeting outcome document, the extent to which they shall shape the internet policy debate will be the ultimate measure of success for this study.

Responses to the study will be consolidated into a report to be presented at the General Conference in November 2015. Addition information can be found here

Next: Women And Internet Freedom In East Africa