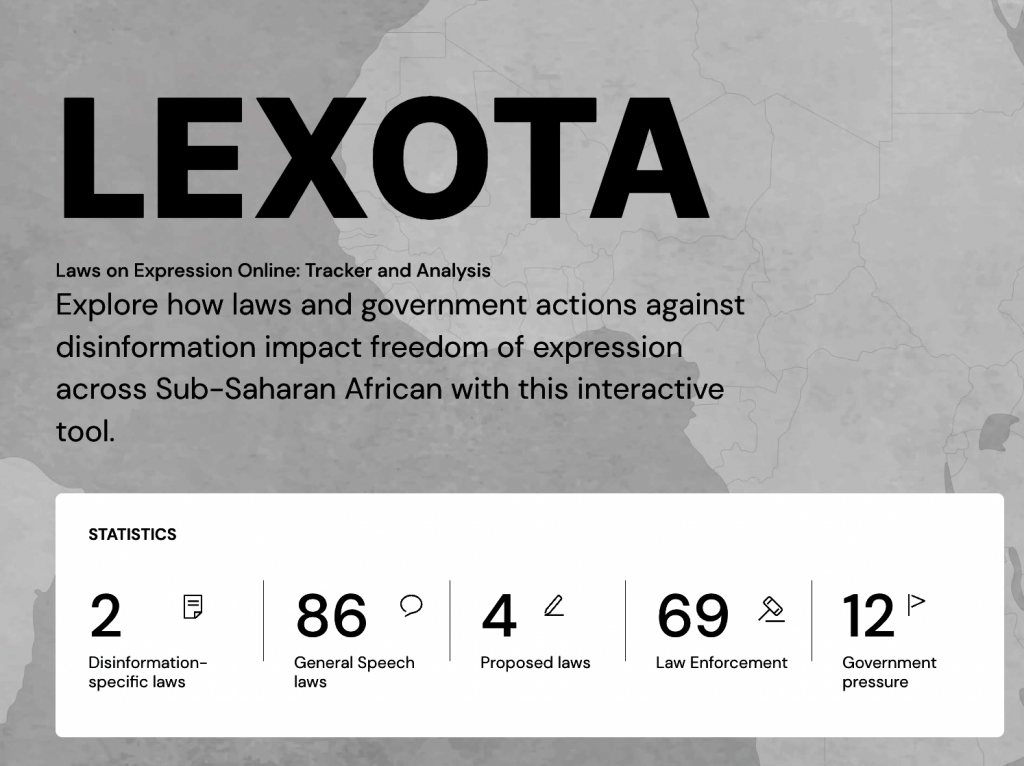 In June 2020, a coalition of civil society groups launched an interactive portal to track and analyse disinformation laws, policies and patterns of enforcement across Africa. The portal was developed against a backdrop of rapidly accelerating state action on COVID-19 disinformation.

Two years on, as online disinformation is increasingly becoming prevalent, spurred by the growth in access to the internet and social media platforms, more African governments have devised new ways of countering and responding to disinformation, which are often in conflict with international human rights standards.  In an effort to continue keeping track of regulatory approaches and policy responses to disinformation on the continent and serve as a reference tool for human rights advocates, a revamped portal with dynamic features and multilingual data has been launched. The revamped platform is dubbed Lexota – Laws on Expression Online: Tracker and Analysis.

Speaking at Lexota’s launch on May 10, 2022, Jacqueline Rowe, Policy Officer at Global Partners Digital, noted that it is crucial for civil society organisations, internet freedom actors, and human rights defenders in the region to have up-to-date and accurate information on disinformation laws and policies to inform effective advocacy against problematic restrictions with implications on human rights.

In her keynote address at the launch, Julie Owono, the Executive Director of Internet Sans Frontières, noted that governments across the world are increasingly responding to the spread of disinformation online through legal restrictions, increased surveillance, and internet shutdowns – all of which pose risks for individual human rights. Owono stated that these trends are particularly noticeable in Sub-Saharan Africa where nearly every country has a vague law or policy that includes restrictions on sharing or publishing false information online. Indeed, recent research shows that given the broad definitions of what constitutes disinformation in various laws, provisions had been weaponised to silence critics, shrink civic space, and hand authoritarian governments an excuse to assert greater power over the digital sphere.

The impact of disinformation on journalism was highlighted by Muthoni Mumo, the Sub-Saharan Africa representative at the Committee to Protect Journalists (CPJ). “Disinformation laws have been weaponised to arrest and prosecute journalists arbitrarily in the guise of fighting fake news and propaganda,” said Mumo. She cited a recent case in Somaliland – a breakaway state in Somalia – where a number of journalists were arrested in April 2022 for reporting on a prison riot. Although some of the journalists have since been released, three remained in jail for allegedly posting propaganda and reporting false news.

According to Edrine Wanyama, the Legal Officer at the Collaboration on International ICT Policy for East and Southern Africa (CIPESA), Lexota provides a comparative understanding of the disparities in the disinformation legal landscape in Africa, including legitimate and illegitimate measures and responses. Similarly, Sylvie Siyam from PROTÉGÉ QV stated that beyond being used as a source of information and research, Lexota will be a critical advocacy tool for policymaking and sharing of best practices with regard to combating disinformation while upholding human rights.

Lexota’s launch called for more skills development in digital literacy and fact-checking for citizens and government officials. Owono stated that government officials were “some of the biggest purveyors of disinformation and they should be educated to know that buying into any disinformation campaign will not win an election. Restoring trust with citizens can help that.” The launch also called for increased stakeholder participation in policy processes as well as strategic litigation to challenge regressive laws.

Lexota partners – Article 19 West Africa, CIPESA, Centre for Human Rights at the University of Pretoria, Global Partners Digital, and Protege QV – are undertaking capacity building, national and regional advocacy on disinformation and freedom of expression across Africa. To date, CIPESA has conducted training on disinformation and human rights advocacy in Arusha, Tanzania, and Mbarara, Uganda benefiting over 45 individuals, including journalists, civil society actors, lawyers, and academia.

In addition, CIPESA delivered a lecture on disinformation and electoral processes as part of the Association of World Election Bodies (AWEB) capacity-building programme on elections and media. The lecture explored current trends, aspects of disinformation, and their impact on elections; existing responses to disinformation threats and their effectiveness; and good practices to combat the spread of disinformation. Further, it explored the roles and strategies of election management bodies to counter disinformation; as well as media monitoring and oversight. The engagements build on past regional skilling efforts by CIPESA and Global Partners Digital.