How Surveillance, Collection of Biometric Data and Limitation of Encryption are Undermining Privacy Rights in Africa

The right to privacy online has become a critical human rights issue, given its intricate connection with, and its being a foundation for the realisation of other rights including the rights to freedoms of expression, information, assembly, and association and preservation of human dignity. However, many African countries have steadily taken measures to undermine this right, including enacting retrogressive laws and policies that facilitate surveillance and the collection of biometric data, and others that limit the use of encryption

The advent of the Covid-19 pandemic has exacerbated the privacy concerns yet in several countries, digital rights were already under steady attack, including via internet shutdowns, criminalisation of “false news”, misinformation and disinformation campaigns by state and non-state actors, harassment and prosecution of social media users, and growing state surveillance.

In responding to the pandemic, many countries adopted regulations and practices, including deploying surveillance technologies and untested applications, to enable them collect and process personal data for purposes of tracing, contacting, and isolating those suspected to be carrying the virus and those confirmed to carry it. These measures were quickly adopted, often without adequate regulation or oversight. 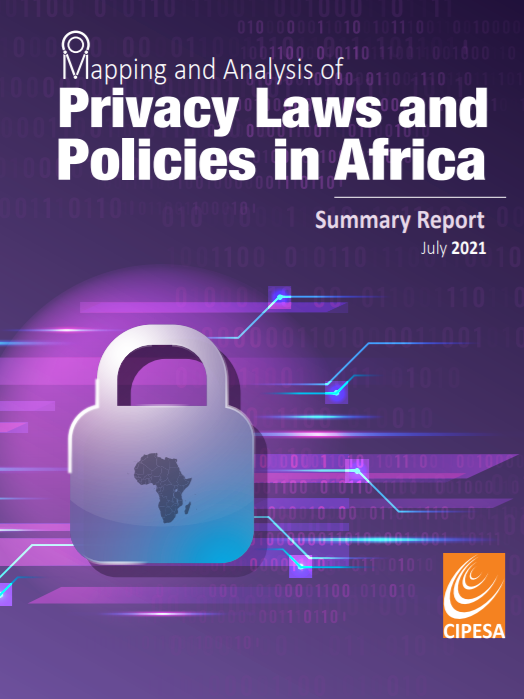 In this research report, the Collaboration on International ICT Policy for East and Southern Africa (CIPESA) has analysed laws and policies that impact on privacy, notably those that regulate surveillance, data localisation, biometric databases, and encryption.

Growing Surveillance: The research findings show that overall, there has been notable progress in the enactment of specific laws and policies safeguarding the right to privacy, including requiring judicial authority to authorise surveillance in countries such as Kenya, Nigeria, Tanzania, Tunisia and Uganda.

However, there are a few cases, such as in Zimbabwe, where authorisation for monitoring and intercepting communications is offered by non-independent and partial actors such as ministers. In addition, many of the countries’ laws do not measure up to international human rights standards and fail to establish clear and appropriate oversight, redress, and remedy mechanisms.

Indeed, “national security” considerations have been employed in laws in various countries broadly to justify and authorise the interception of communication, restrict privacy rights, grant wide search and seizure powers to law enforcement agencies, mandate intermediaries such as telecommunication service providers to facilitate interception, and to require data localisation.

Limitation of Encryption Anonymity and the use of encryption in digital communications are critical in advancing both the right to freedom of expression and right to privacy. In the absence of these rights,  the capacity of individuals to communicate anonymously and without fear of their communications being intercepted cannot be guaranteed.

There are few positive provisions in some countries that require the protection of personal data through technical security measures which include encryption. On the other hand, many countries in the study have passed legislation that limit anonymity and the use of encryption through criminalisation of possession and use of cryptographic software or hardware, providing for fines and prison sentences.

The findings show that in countries like Chad, Malawi, Senegal, Tanzania, Tunisia and Zambia, there are penalties for offering cryptographic services without licensing, registration or authorisation. Interception of communications provisions often require service providers to decrypt any encrypted information that they may intercept in the course of offering assistance to lawful interception. In countries such as Mali and Tanzania, the laws require the encryption service providers, upon registration with the authorities, to disclose the technologies they plan to use for encryption.

Data Localisation The findings show that a growing number of African countries have been legislating on data localisation, which has mostly taken the form of a requirement to store data locally and forbidding unauthorised cross-border data transfers. Various countries have specified the conditions for authorising transfer, mostly where the data subject has offered consent and where an adequate level of protection is assured in the recipient country or international organisation.

Some countries have specified the data that cannot be exported without authorisation. Kenya specifies all public data; Nigeria mentions all government data and all subscriber and consumer data; while Zimbabwe, Malawi and Tunisia cite personal information.

Establishment of Biometric Databases  In several countries, government agencies are collecting and processing personal data without adequate data protection laws, amidst limited oversight mechanisms and inadequate remedies. While many have recently passed data protection laws and policies, implementation is not effective, and the safeguards are not water-tight as required under international human rights law.

Some laws in countries such as Chad, Kenya, Tunisia, Uganda, South Africa, and Zimbabwe, prohibit the collection of certain categories of data, including specific types of biometric data generally, or where certain conditions are not complied with. In the other countries studied, the laws require the mandatory collection of biometric information for the registration of telecommunications subscribers, for digital identity programmes and during voters’ registration. Several laws and policies on biometric data collection contain provisions on sanctions and penalties for breach.

Weak Oversight, Transparency and Accountability Mechanisms The study found that countries have adopted different approaches to oversight, including specifying courts, data protection authorities, sector regulators and administrative bodies as key oversight bodies. Some of these bodies are located within the executive, and therefore may lack the proper legal, financial, and institutional independence to stem violations within government, and especially by state security agencies. The laws in most countries require judicial authorities to issue a warrant for interception or monitoring of communications. However, in some countries interception orders can be issued by non-judicial officials, such as ministers.

The deficiency of accountability and transparency is among the weakest links in the various countries’ surveillance laws. While some countries, such as Nigeria, Rwanda, Tunisia, Zimbabwe, have commendable oversight and accountability provisions, it is not known whether they are applied. No entity in any of the countries studied permits public access to records on interception which the laws require state authorities to compile periodically, or publishes any data related to interception warrants issued and if at all they do record such data, they are categorised as classified information under state secrets laws. Thus, the public and oversight institutions such as judiciaries and parliaments remain in the dark about the extent and legality of the conduct of surveillance in the respective countries.