How Telecom Companies in Africa Can Respond Better to Internet Disruptions 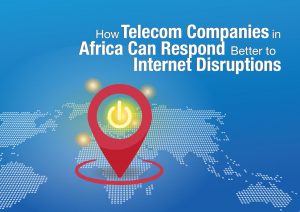 In recent years, disruptions to the internet and social media applications have emerged as a common and growing trend of digital repression especially in authoritarian countries in Africa. Since 2019, countries such as Algeria, Benin, Burundi, Cameroon, Chad, Côte d’ivoire, Democratic Republic of Congo (DR Congo), Ethiopia, Gabon, Guinea, Mali, Nigeria, Sierra Leone, Sudan, Tanzania, Togo, Uganda and Zimbabwe have either restricted or blocked access to the entire internet.

A February 2021 brief by CIPESA shines the spotlight on intermediaries’ responses to government orders and indicates that while the intermediaries facilitate transactions, access to online information and services, and provide platforms for interaction, expression and citizen participation, they are usually caught up in the overarching control of their activities by the autocratic governance of host governments who usually place political control and dominance over the enjoyment of digital rights.

Consequently, intermediaries’ responses to internet disruption orders on the continent have almost always been of quiet obedience. Most have failed to take any steps to push back against government excesses. Airtel (Chad and Uganda), Africell (Uganda), Gabon Telecom, MTN (Cameroon and Uganda), Tigo Chad, and Zimbabwe’s Econet Wireless are among those that unquestioningly acquiesced to censorship orders by governments in compliance with their license conditions but also to safeguard their business interests. They appeared to remain silent even in the face of pressing demands to restore the internet, and in some instances denied having blocked the internet on their networks.

However, other intermediaries such as MTN Benin, Orange Guinea, and Lesotho’s Econet and Vodacom pushed back. These intermediaries shared publicly the government letters ordering disruptions, identified the government officials ordering the shutdowns, and disclosed the basis for the shutdowns. In some instances they engaged with authorities to make the case for maintaining uninterrupted access, resisted or declined to implement unlawful orders, apologized to the public for disruptions, or even compensated their customers for the downtime arising from the disruptions.

While some of these steps are laudable, more needs to be done by local intermediaries to resist future shutdowns, uphold consumer protection, and promote respect for human rights online. Many of these intermediaries seem to lack the backbone to resist or challenge in court the legality of internet shutdown directives. It remains problematic that they seem to put their business interests first, while paying limited attention to the human rights, social and economic implications of internet disruptions.

The CIPESA brief recommends that intermediaries improve transparency reporting; always insist on written instructions and orders from authorities, and promptly make these orders public; expand their partnerships and engagements with civil society and join key platforms that aim to collaboratively advance a free and open internet.

The brief also recommends that intermediaries give users sufficient notice of impending disruptions; engage regulators and push back against licensing conditions (and laws governing the telecoms sector) that are vague, or that could potentially lead to the violation of human rights; and speak out publicly about the harms which network disruptions cause to their subscribers and to the intermediaries themselves.

Further, intermediaries should develop and make public policies that specifically state their position on shutdowns and how they address any shutdown orders from governments; and strive to comply with the UN Business and Human Rights Principles (UNBHR).

The brief also calls upon individuals and the business community to challenge the actions of intermediaries before national, regional and international mechanisms for accountability and compensation of losses incurred as a result of their actions.

Next: Namibia and Sierra Leone’s Digital Rights Record to be Assessed at the 38th Session of the Universal Peer Review