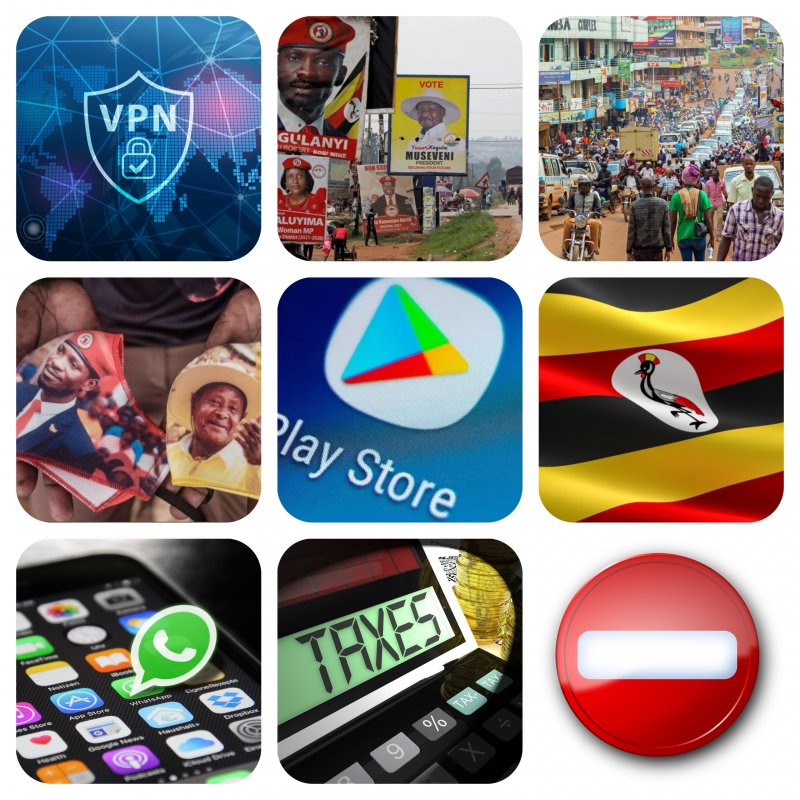 Uganda’s 2021 election, in which a president who has been in power for 35 years is seeking re-election, is a textbook case of how recent polls in authoritarian African countries go: disrupted internet, rampant disinformation campaigns, opposition candidates routinely arrested, peaceful protesters shot dead, and the media and civil society profoundly harassed.

If he wins the election, incumbent Yoweri Museveni, 76, will take his tally as Uganda’s president to 40 years. His main challenger Robert Kyagulanyi, 38, is a popular musician commonly known as Bobi Wine who joined politics in early 2017. Kyagulanyi has regularly been arrested, barred from radio stations and stopped from campaigning in most of the country. Other strong presidential contenders, notably Patrick Oboi Amuriat of the Forum for Democratic Change (FDC), have similarly been harassed.

The blockage of social media and other digital platforms dealt a heavy blow to opposition candidates’ efforts to canvass support. The country is conducting a so-called “scientific election”, one where the media and digital platforms provide the main campaign platforms, with physical meetings largely barred due to Covid-19 social distancing protocols. But the internet disruption also denied citizens access to vital information crucial to their informed decision-making in the poll and undermined electoral transparency in a country where the ruling party is routinely accused of electoral fraud.

Museveni’s ruling National Resistance Movement (NRM) accuses Kyagulanyi’s National Unity Platform (NUP) supporters of fomenting violence and flouting electoral regulations that bar large campaign crowds so as to prevent the spread of Covid-19. But critics say Covid-19 handed the government a ready excuse to trample citizens’ rights and hinder civic engagement and mobilisation by its opponents. They also accuse police and the Electoral Commission (EC) of cracking down on opposition candidates while turning a blind eye to NRM candidates’ breach of Covid-19 Standard Operating Procedures (SOPs).

Much like the police, the communications regulator, Uganda Commissions Commission (UCC), has been faulted for treating Museveni’s challengers partially and unfairly. Before ordering this week’s blockage of social media and other digital services, the commission had ordered all content producers (including live streaming channels and bloggers) to seek its authorisation in order to operate. That move cast a chill on free expression, as it promoted self-censorship and restricted the engagement of citizens in online platforms.

In another move that cast doubt on the independence of the communications regulator, last month it asked Google to block 14 YouTube channels sympathetic to opposition candidate Kyagulanyi. The UCC said the channels were misleading the public and inciting violence. The commission’s decision to single out only opposition-leaning channels was questionable. The UCC had argued that these channels were used to mobilise protests last November that left more than 50 people dead. However, it is through these channels that repeated cases of blatant police and army brutality were documented and reported. Google declined to consider the blockage request since it was not accompanied by a court order.

Now, it turns out that the order to block social media was not the result of an independent assessment by the UCC, but a directive handed to it by the NRM, and possibly by President Museveni. In a January 12 television address, Museveni said the blockage was in retaliation for Facebook banning accounts of his supporters. “We can not tolerate this arrogance of anybody coming to decide for us who is good and who is bad,” Museveni said of Facebook.

On January 11, Facebook suspended the accounts of a number of government officials and NRM party officials for what it described as Coordinated Inauthentic Behaviour (CIB) aimed at manipulating public debate ahead of key elections. Twitter also suspended similar accounts.

The decisions by Facebook and Twitter were backed by an investigation by the DFRLab that uncovered a collection of Twitter accounts and Facebook pages engaging in suspicious online behaviour, including posting verbatim messages supporting the Ugandan government and damaging to the opposition. Facebook’s internal investigation attributed the network to a group within Uganda’s Ministry of Information and Communications Technology.

While both platforms are currently embroiled in global debates which include their roles in content moderation and deplatforming, they have publicly supported their actions in Uganda, with Facebook stating that, “Given the impending election in Uganda, we moved quickly to investigate and take down this network.”

For its part, Twitter stated: “Earlier this week, in close coordination with our peers, we suspended a number of accounts targeting the election in Uganda.” Twitter added, “If we can attribute any of this activity to state-backed actors, we will disclose to our archive of information operations.” During the 2016 elections, research showed that the NRM had deployed up to 5,000 Twitter bots to influence online discourse on the election in favour of Museveni.

The process of disrupting digital communications commenced on January 9 with applications download platforms like Google Play and Apple’s App Store being affected, and by January 11,  social media platforms such as Facebook, Twitter, Instagram, and Whatsapp also started being blocked.  While rising numbers of users are relying on Virtual Private Networks (VPN) to stay connected, the government is understood to have ordered that several VPN providers be blocked too.

Over the years, Uganda has made it a habit to disrupt communications during elections.  Often, the protection of national security and public order has been cited as the basis for disruptions to digital communications. In 2006, Uganda blocked websites critical of Museveni. In 2011, it censored short message service (SMS) and blocked social media during the post-election #WalkToWork protests. In 2016, it blocked social media and mobile money services on election day and again during Museveni’s swearing in (only social media).

While Uganda is categorised as a hybrid regime – one that has democratic and authoritarian tendencies –  CIPESA research has shown that the less democratic credentials a government possesses, the higher the likelihood that it will order internet disruptions. It has also shown a correlation between a leader’s longevity in power and the likelihood of ordering network disruptions.

In recent weeks, the government has increasingly been hostile to dissenting opinions and cracked down on the political opposition, civil society, and the media.

Earlier this month, the Inspector-General of the Uganda Police stated in a public address that the police would continue to assault journalists for “their own safety”. The statement came in the wake of increased police brutality against journalists covering opposition candidates. On December 27, at least three journalists were injured by the police, one of them seriously; and earlier that month police beat up six journalists who were covering Kyagulanyi in Lira town in northern Uganda.

The assault on media freedom was further highlighted when the state-backed Uganda Media Council issued a directive in December for journalists to register with the council in order to cover the elections – and threatened criminal charges against any media houses, both local and international, including freelance journalists, who failed to register. Some argued that the cost (UGX 200,000/USD 54) associated with the registration was an extra limitation for poorly paid journalists in addition to the suspicious timing of the directive just weeks to the election, which appeared like a means to curtail press freedom.

Meanwhile, in a press statement the police warned that journalists who had not registered with the Media Council would be blocked from covering campaigns and other electoral activities.  Civic actors described this as a “move by the government to manage information about election campaigns that have been marred by violence against leading opposition candidates and their supporters.”

Due to the Covid-19 pandemic, citizens in Uganda are increasingly reliant on digital technologies  for information crucial to their health, education, economic livelihoods, and political participation. Disrupting digital communications as Uganda has done not only raises concerns about its commitment to democracy and transparency during this critical time but also has far-reaching repercussions for the developing country’s economy and the lives of ordinary citizens.

Viewed together with the violence that state agents meted out on opposition supporters, the media and civic actors, and the partiality of regulatory agencies such as UCC and the EC, Uganda’s 2021 election is likely to have lasting effects on the social, economic and political arena of the country.