The push for open data that contributes to government transparency and accountability in service delivery and promotes citizens’ right to information and innovation in the Information and Communication Technology (ICT) sector continues to gain prominence globally. Indeed, open data has been recognised as a key pillar of sustainable development. However, implementation of open data by African governments, civil society and the private sector is mostly in its infant stages, with some countries recording more success than others.

On September 4-5, 2015, the government of Tanzania and the World Bank hosted the first Open Data Conference in Africa, that brought together the emerging open data community in Africa to showcase innovations and discuss opportunities and challenges to open data implementation.

Bella Bird, World Bank Country Director for Tanzania, told the conference that data is no longer for statisticians but governments that want to measure progress and democratic achievements. According to Ms. Bird, open data was “nowhere more relevant” than in Africa which is experiencing the fastest changes in population, urbanisation, and economic development compared to other continents.

She said that advancing open data in Africa was not just about making data accessible but making good data available and user friendly. “Without [data] evidence, planning and strategy is difficult and less likely to succeed,” she said.

The World Bank has supported over 30 countries around the world (including some in Africa) in the evaluation, design and implementation of open data initiatives. But few African countries are leveraging the potential of open data compared to their global counterparts.

In 2011, the Open Government Partnership (OGP) was launched as a multilateral initiative “to secure concrete commitments from governments to promote transparency, empower citizens, fight corruption, and harness new technologies to strengthen governance”. To-date, only eight of the continent’s 54 countries have joined the partnership that works to increase government openness in budget transparency, access to information, asset disclosure by politicians and officials, and citizen engagement. The OGP has 58 other member states across the world.

Meanwhile, in 2014, the Global Open Data Index which measures and benchmarks the openness of data in 97 countries around the world ranked South Africa highest among 19 African countries surveyed, at position 36. Burkina Faso followed in 59th position and Senegal in 63rd. Among the lowest ranked countries were Guinea (97), Mali (96) and Sierra Leone (94). 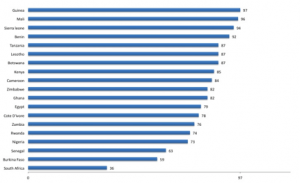 However, as noted by Frannie Leautier, a managing partner with the Fezembat Group in France argued that it did not matter where African countries are ranked in the index or the partnerships they belong to. Focus should be on what stakeholders in each country can do with open data to improve livelihoods.

Meanwhile, the World Wide Web Foundation’s Nnenna Nwakanma suggested that open data use on the continent should not only be about the accountability of governments but also about giving citizens the opportunity to plan, invest, and gain financially to better their lives.

“The problem in Africa is not money itself but how best to invest money. If we have the right information and data, the one billion citizens will start investing accordingly,” she said.

Participants at the conference which was held in Dar es Salaam widely recognised the key role of national statistics agencies in actualising the potential and impact of data. They also recognised the need to set up the right infrastructure and skills building to fill the existing gaps. Civil registration for birth, deaths, and marriages was recommended to ensure vital statistics are not always based on estimates. Other recommendations included advancing partnerships between the various actors to share experiences and avoid reinventing the wheel.

To read more about the conference proceedings, see #africaopendata.

Next: Promoting Access to Information and Digital Safety Awareness among Tanzanian Journalists For Upcoming Elections