There are numerous tools which can secure online users’ communications, including through anonymising their identities and enabling them to circumvent online surveillance and censorship. In some cases, developers have gone on to localise such tools to suit various contexts. However, the tools’ relevance to certain populations and how best to improve them for a diverse range of users remains largely unknown.

During May 2015, the Collaboration on International ICT Policy for East and Southern Africa (CIPESA) in partnership with tech innovation hub OutBox challenged members of the Ugandan tech community to test five digital safety and security tools in order to gain an understanding, in a local context, of the tools’ strengths, weaknesses and opportunities for localisation. The challenge was in the context of CIPESA’s OpenNet Africa initiative which monitors and promotes internet freedom in east and southern Africa.

The tested tools were Cyrptocat, Mailvelope, Martus, TextSecure and Redphone. The scope of testing included how the tools enabled anonymisation, circumvention, and privacy of communications. The tests had to take into consideration different user communities, including women, bloggers, journalists, human rights defenders, and sexual minorities, and the nature of threats to internet freedom in the East African region. 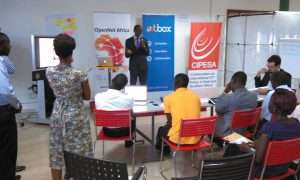 These threats are often linked to the fight against terrorism, combating online hate speech, suppressing the views of opposition parties (mainly around election periods), and in crackdowns against particular groups, such as Lesbian, Gay, Bisexual, and Transgender (LGBT) community, critical media and human rights activists. The threats often come in the form of surveillance, blocking of websites and social media sites, and interception of communications.

Three teams participated in the challenge through trial exercises, user consultations and stakeholder interviews. In considering which tools were better suited to promote internet freedoms of the region’s citizens, the teams that conducted the tests also bore in mind the proliferation of technology, internet speeds and literacy levels in the region. Language, multiple device use and aesthetics such as the interface design including colours and icons, were also among the other features for testing.

The teams found a number of shortcomings on some tools, including the lack of protection from key loggers, poor or no consideration for low internet speed users and those with low ICT skills and literacy levels. Some tools were found to have limited cross platform/device operability, while others were not accessible to visually impaired persons.

“Pious, a 25-year old IT student at Makerere said that he is now using Redphone with his girlfriend whenever they feel like phone sex in order to avoid the spying software announced by Fr. Simon Lukodo, Minister of Ethics and Integrity,” Tean Tech4Dev

The teams made recommendations for improvement and localisation, including translation of the tools into local languages, compatibility provisions across social media platforms, and feature phone support.

The teams also proposed numerous cases in which the tools can be used by marginalised and vulnerable user groups in East Africa. They cited youth mobilisation, gender-based violence and other human rights violations reporting, monitoring and victims support, facilitation of opposition groups’ activities, and protection from corporate espionage.

However, the teams also highlighted the potential of the tools promoting hate speech and radicalism in East Africa’s fragile socio-political environment through safeguarding the communications and activities of offenders.

“One of the primary uses of the Internet by terrorists is for the dissemination of propaganda. Through encrypted communications, terrorists can easily spread their propaganda and also plan their activities,” noted Team African Value. The team added that promotion of divisiveness and encouraging violent acts on ethnic grounds has become common on East African online platforms.

The teams also noted the need for increased awareness raising and capacity building among users to promote an understanding of cyber threats and online safety. Among the possible ways to achieve this was through working with academia to develop cyber security curriculums for education institutions.

The findings of the teams were showcased at a pitching event held on June 2, 2015 where a panel of judges determined the team with the best reports and localisation recommendations. The judges were Wilson Abigaba (Internet Society – Uganda Chapter), Richard Lusimbo (Sexual Minorities Uganda), Baldwin Okello (Uganda Telecom) and Neil Blazevic and Mark Kiggundu – both from East and Horn of Africa Human Rights Defenders Project.

The winning team was Tech4Dev, which was followed by Ghost In The Wires then African Values. See more on the event on  Storify

Previous: Promoting inclusive use of ICT in monitoring service delivery in Uganda

Next: Update on the State of Internet Freedom in Burundi