Using ICT to Promote the Right to Information: Perceptions of Ugandan Citizens and Public Officials 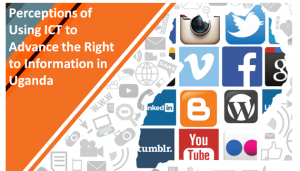 Towards the end of 2014, the Collaboration on International ICT Policy for East and Southern Africa (CIPESA) conducted research into how public officials and citizens perceived the potential of Information and Communication Technology (ICT) to advance the right to information in Uganda.

The studies revealed that there is a keen interest by citizens and public officials to leverage digital tools for increased transparency, civic awareness and participation in democratic processes. However, a larger proportion of citizens was using ICT relative to the public officials to improve access to information.

One study involved the administration of a questionnaire to 62 public officers from more than 30 Ministries, Departments and Agencies (MDAs). A second study targeting citizens involved the administration of a separate questionnaire amongst 235 respondents drawn from 10 districts, mainly university students, journalists, and staff of civil society organisations.

Uganda enacted the Access to Information Act (ATIA) in 2005, becoming one of the first African countries to have such a law. The Act, however, remained unimplemented until 2011 when the enabling regulations were enacted.

The research reveals that although ICT tools such as emails and telephone calls are being used to request for information, requested information remains in silos as it is given directly to the requester with no guarantee that it will be disseminated further.

Challenges noted by public officials for the low levels of information release included limited ICT skills, the Official Secrets Act (1964) which hampers release of information to the public, and limited resources to adequately implement the Act on a more regular basis.

Meanwhile, following the launch of the Ask Your Government (www.askyourgov.ug) initiative in August 2014, the research aimed to gauge respondents’ knowledge and use of the portal. The portal was launched by government in partnership with civil society to enable Ugandan citizens to make public information requests from MDAs.

In the research, 75% of public officials strongly agreed that the use of ICT would make it easier and simpler to respond to information requests. This was supported by 79% of the citizen respondents who believed that the use of ICT to make information requests was likely to enable public bodies become more responsive than use of manual, non-ICT means. This would alleviate the “long process” and “cumbersome bureaucracy” which citizens pointed out as key reasons for not using the law to request for information.

For journalists who participated in the research, the 21 days which the law gives public officials to respond to information requests was cited as a key challenge given the tight deadlines in media work.

See: Advancing the Right to Information Amongst Ugandan Journalists

However, both citizens and officials indicated some skepticism about the effective use of ICT to adequately support the right to information. Public officials pointed out technical challenges such as low bandwidth, outdated equipment and limited skills within the MDAs.

One official noted, “Although employed by government, many officials have no access to ICT and some lack knowledge of how to use the tools.” Safety and security concerns were raised with regard to citizens’ personal information.

Public officials recognised that improvements can be made to better put more information in the public domain. They recommended the provision of more authority to information and communication officers to disclose information; increased use by MDAs of interactive websites and social media as these are channels that their audiences are using; and a repeal of the Official Secrets Act (1964).

See the full research reports below:

Next: Promoting Cultural and Artistic Expression in Africa