On November 7, officials from 40 Uganda Government Ministries, Departments and Agencies (MDA) were trained in promoting citizens’ right to information, including through the use of the Ask Your Government portal.

Launched on August 14, 2014, www.askyourgov.ug allows Ugandan citizens to directly send requests for information to information officers in Government MDAs. Responses to the requests are relayed directly to the email address of the person who makes the requests and are also publicly displayed on the portal. In accordance with Uganda’s Access to Information Act of 2005, the portal promotes citizens’ right to information in support of transparency, accountability and good governance.

The dialogue aimed to increase the number of information officers registered on the portal and encourage the officers to respond to information requests within 21 days as required by the law. 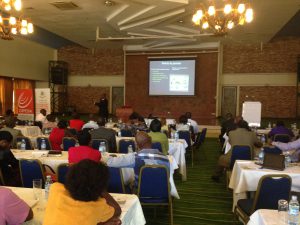 Currently there are 70 MDAs registered on the AskYourGov portal and so far 45 requests for information have been logged through the portal, of which 20 have received responses. Only 8 of the 20 responses have been classified as successful by requesters.

In an effort to encourage the Officers to improve the response rate, Sylvia Biraahwa, the Principal Information Officer, Directorate of Information and National Guidance, Office of the Prime Minister (OPM), urged officials to adopt internal practices that promote transparency and accountability without waiting for directives to be handed down from the central government. Ms. Biraahwa commended the Lands Ministry for taking positive steps in information disclosure by developing an access to information manual, setting a great example for other MDAs to follow suit.

However, one official argued that the best way to motivate information officers to respond to right of information requests was through a top-down approach. “OPM and the Directorate of Information should demand that there be sections in annual Ministerial Policy statements regarding what has been done and achieved in the area of ATI [access to information],” he said. This would “motivate and give support” to low-ranking officers to act in compliance with the law.

The dialogue, which was organised by the OPM in partnership with CIPESA and the Africa Freedom of Information Centre (AFIC) also sought to sensitise officials in emerging media platforms for increased openness and citizen engagement. Ms. Juliet Nanfuka Nakiyini of CIPESA said cabinet, in May 2013 directed the Ministry of Information and Communications Technology (ICT) to ensure that every MDA opens a Twitter and Facebook account to improve communication with the public. This directive, together with the Websites and Social Media standards and guidelines developed by the National Information Technology Authority (NITA), provided immense opportunities for attracting more citizens into the democratic process and building accessible information repositories.

Ms. Nanfuka urged officials to exploit the push and pull symbiotic relationship that can exist between government and citizens through askyourgov.ug and MDAs’ social media platforms. For instance, they could initiate discussion topics on Facebook and Twitter on readily available information and invite discussants to send requests through the AYG website for information to inform the debate. She encouraged the MDAs to share on their websites and social media platforms the queries they receive via AskYourGov and the responses they provide.

Simon Mayende, the Director of Information and National Guidance, urged the participating MDAs to also utilise Public Education Programmes in print and broadcast media spaces for citizens sensitisation on RTI as provided for under the government communications strategy.

Mr. Mayende said the Uganda Law Reform Commission was working to identify laws with provisions that contradict the access to information law so as to draft progressive amendments for tabling before parliament.

Read more about the day’s activities here. Visit the portal on www.askyourgov.ug to register and make information requests. See also the Ask Your Government Uganda User Guide and Information Sheet.

Next: Documenting the Impact of Aid Cuts on the Peace Recovery and Development Plan (PRDP)