Open Data: Can it Play a Role in Poverty Eradication? 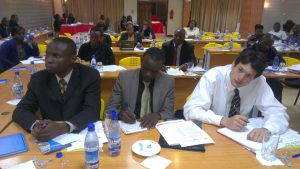 Open data is widely believed to have the potential to positively influence transparent and accountable governance across the world including in developing countries like Uganda. But how can open data help in eradicating poverty? This was the focus of a workshop hosted by Development Initiatives (DI) and Development Research and Training (DRT) on June 5, 2014 in Kampala, Uganda.

The workshop served as the presentation of research findings comparing Kenya and Uganda on how current open data initiatives in the two countries are contributing to poverty eradication and how such initiatives could be strengthened.

Bernard Sabiti, Program Officer at DRT, said although the study found no immediately clear link between open data and poverty eradication in Kenya and Uganda, this did not rule out the possibility for future linkage. He noted that in Kenya, ICT sector growth had driven increased government openness, with initiatives such as the Kenya Open Data portal promoting access to resource allocation information. However, up-to-date data and information remained unavailable. In Uganda, accessibility to public information was limited due to an underdeveloped ICT sector and reliance by government departments on traditional means of information sharing. While Kenya’s Right to Information law remained in draft form and Uganda’s 2005 Access to Information law remained largely unimplemented, accessibility of information in the two countries was further hampered by the rural-urban divide in literacy, access and use of digital technologies.

The study found that often, actors such as civil society, the private sector, the tech community, media, citizens, and academia work in isolation, producing good data but failing to collaborate to extend its usefulness and impact. It suggested that these actors should work more with the government to explore ways that open data can positively influence policy decisions to eradicate poverty.

In Kenya, Mr. Sabiti said, stakeholders and beneficiaries needed to be encouraged to utilise the available data, while encouraging government to open up more data. In Uganda, initial focus needed to be on financial investment in open data processes and capacity building particularly at central government level to implement and strengthen existing access to information frameworks.

However, Charles Lwanga-Ntale, Regional Director of DI Africa, emphasised that open data should not be seen as an end in itself but as a means to reducing poverty. He argued that open data can play a role if the quality, quantity and accessibility of information available to monitor economic, social and environment performance at the national and global levels can enable governments and citizens to track development progress better and to make more informed decisions.

Mr. Lwanga-Ntale said advancements and increase in use of ICTs had created greater demand for openness in Kenya and Uganda. Accordingly, governments needed to take positive steps by embracing open practices and amending policies that restrict access to public information.

“Many political leaders fear openness, and they are attempting to hold onto power in a space that is becoming less and less easy for them to control. Those who tend to favour open data generally come from lower ranks, and have less influence in decision making,” he said.

The utility and appropriateness of data in the public domain emerged as key themes during open floor discussions. One workshop participant questioned whether the youth in the two countries were interested in engaging with open data, or if the information provided was simply too overwhelming to be used effectively by ordinary citizens. Another asked whether the intended recipients of data were being adequately engaged in determining exactly what data they want or need.

Many agreed that these questions raised significant challenges: that open data initiatives sometimes fall into the trap of mass information dumping without consideration of how the information can be utilised. Since data collection can be expensive, such mass data dumps are neither productive nor efficient because the intended beneficiaries remain unable to engage with the information and it remains un-used.

As a means to overcome this, participants said there was a need for more discussion with proposed consumers of data and for data producers to try not to assume the needs of users. The importance of engaging infomediaries such as the media, civil society and community based organisations so that they interact and translate the data for the wider populace was highlighted. Doing so could help create visual aids and simple, meaningful data that more citizens can understand.

Indeed, as pointed out by Vincent Bagiire, Chair of the ICT Committee in the Ugandan Parliament in his key note address at the workshop, a significant challenge to open data in countries like Uganda and Kenya was the tendency for initiatives to rely “too much on the internet” yet citizens as the intended beneficiaries were predominantly based in rural areas where internet access was low.

Sam Mutabazi, the Executive Director of Uganda Road Sector Support Initiative, provided an example of the utility of open data in resource allocation. He presented on prevailing issues in the road sector, such as mismanagement and poor quality control. He argued that open contracting – the disclosure of information on tendering, performance and project status in the sector – could help increase public engagement in monitoring implementation and thus better quality roads.

Overall, the workshop showed that while open data has not been fully realised in East Africa, there was significant potential for it to contribute to overcoming poverty. A lack of funding, especially in Uganda, and internet accessibility issues serve as major barriers to data openness, but the growing youth population, with their tech savviness, have the capacity to demand greater data openness from their governments. Meanwhile, a “unified movement” of multiple stakeholders need to come together to establish and understand the needs of open data consumers and producers so that the data provided can be fully utilised by all not only toward good governance but also overcoming poverty in the respective countries.

Emily Mullins is a 2014 AidData Summer Fellow stationed at CIPESA where she is engaged in geocoding methodology and training. She holds a Masters in International Affairs from the George Bush School at the Texas A&M University, USA.

Previous: Online Privacy and Security: The Debate And The Dilemma