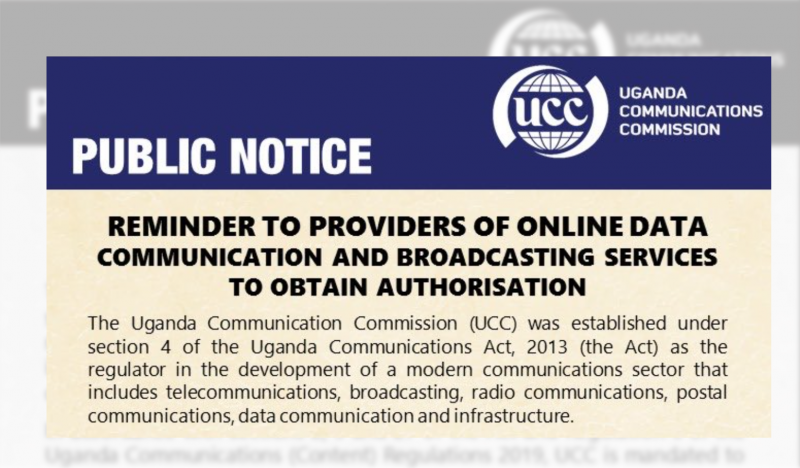 The renewed order by Uganda’s communications regulator for online publishers and broadcasters to apply for licences before they operate presents a grave threat to freedom of expression and citizens’ right of access  to information.

Earlier this month, the Uganda Communication Commission (UCC) set October 5, 2020 as the deadline for “persons currently offering or planning to commence the provision of online data communication and broadcasting services” to obtain authorisation for providing such services to the public.  The latest directive comes two years after the initial notice of March 6, 2018, which instituted the requirement to seek authorisation from the regulator for the provision of these services. The March 2018 notice was widely criticised as an attempt to gag free expression online. Nonetheless, due to the fear of reprisal, an undisclosed number of providers of data communications services are said to have applied and acquired authorisation by early 2019.

The notice comes at a time when digital communications are  taking centre stage in the lead-up to presidential and parliamentary elections to be held in February 2021. The country’s electoral body has decreed that, due to social distancing required by Covid-19 standard operating procedures, no physical campaigns will take place so as to ensure a healthy and safe environment for all stakeholders during the electoral process. Further, parliament passed the Political Parties and Organisations (Conduct of Meetings and Elections) Regulations 2020, which are aimed at safeguarding public health and safety of political party activities in light of the Covid-19 pandemic and provide for holding of political meetings including elections through virtual means.

Online platforms play a critical role in shaping the electoral process by bridging the gap between public office contenders and the electorate and promoting transparency and accountability in Uganda. The requirement for application, registration and authorisation threatens access to information, free speech and the rights to association and assembly. Such limitations will not only promote self censorship but also undermine individual participation in electoral processes.

The UCC has a long history of curtailing press and citizens’ rights – both during and outside of election periods – and is widely considered nondependent. In early February 2019, the Commission threatened to shut down the website of the Daily Monitor – an independent media house – for “publishing news without authorisation” in purported contravention of   the March 6, 2018 public notice. Besides the alleged non-compliance with the requirement to register for a licence to publish online, UCC also accused the newspaper of publishing defamatory news against the Speaker of Parliament, Rebecca Kadaga.

In 2006, the Daily Monitor and its sister radio station – KFM  were blocked from publishing electoral results, while the website of Radio Katwe that was highly critical of the government was also blocked. Five years later in 2011, the UCC ordered internet service providers to block the transmission of SMS messages that contained words related to  the Arab Spring pro-democracy movement or any other words the regulator thought might incite electoral violence. During the most recent elections period in 2016, social media platforms were blocked during the general elections and the inauguration of the incumbent president over “national security” reasons.

Besides setting the deadline for registration of online communications service providers, the regulator has also issued threats to prosecute those who spread false and misleading information.

Meanwhile, in 2018, the government introduced an Over the Top (OTT) tax which requires users of social media to pay UGX 200 (USD 0.05) before accessing platforms. The tax significantly cut the internet penetration rate in the country.

The actions by the UCC mirror those of the regulator in neighbouring Tanzania. In July 2020, Tanzania further entrenched digital rights repression amidst a looming election by issuing regulations that require licencing and taxation of bloggers, online discussion forums, radio and television webcasters, and repress online speech, privacy and access to information.

With the current low levels of access to  broadcast media and ICT, Uganda  needs to  encourage rather than limit the use of these technologies. Should  UCC’s notice be effected, it will frustrate efforts to contain Covid-19 since a lot of the information on the pandemic is provided through online platforms. Moreover, the notice will gag online freedoms and shrink the space within which democratic rights are exercised.