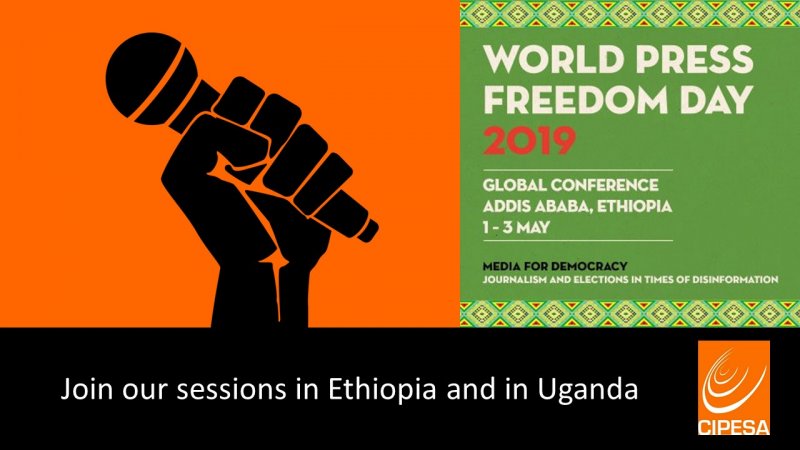 By Juliet Nanfuka |
This year marks the 26th celebration of WPFD and is themed, “Media for Democracy: Journalism and Elections in Times of Disinformation”. The day will be celebrated in more than 100 countries in addition to the main event that will take place in Addis Ababa, Ethiopia at the African Union Headquarters; and will serve as a platform to discuss current challenges faced by media during elections, as well as the media’s potential in supporting peace and reconciliation processes.
In his annual WPFD message, United Nations Secretary-General António Guterres has recently stated: “No democracy is complete without access to transparent and reliable information. It is the cornerstone for building fair and impartial institutions, holding leaders accountable and speaking truth to power.”
Unfortunately, the media and ordinary citizens in several countries are increasingly facing limitations to their freedom of expression, access to information, and the right to associate. This has been witnessed in the  Sub-Saharan context where up to 22 African governments have ordered network disruptions in the last four years – while since January 2019, seven African countries – Algeria, Benin, the Democratic Republic of Congo (DR Congo), Chad, Gabon, Sudan and Zimbabwe – have experienced various forms of network disruptions.

Many of these states have often cited the need to preserve public order and national security as the basis for their disruption of digital communications. The necessity to control fake news, misinformation, and hate speech are also cited in justifying the blockage of access to the internet. However, these actions are also a direct affront to media freedom, often undermining the ability of journalists to gather and impart information, to file reports, contact sources, or verify stories.
This goes against the premise of democracy, particularly at a time when journalists need to robustly play their role as society’s watchdog and when citizens need access to a diverse pool of information to inform their decision-making. In an age of increasing disinformation including by state actors, it is fundamental that the channels of communication, and information sourcing, remain accessible by all to establish the credibility of information and to counter false information with facts.
To mark this year’s World Press Freedom Day (WPFD),  the Collaboration on International ICT Policy in East and Southern Africa (CIPESA) will participate at the global celebration in Ethiopia and at a national event in Uganda to speak about the relationship between network disruptions (such as internet shutdowns and social media blockages), freedom of expression and the role of the media.
Among the sessions CIPESA is participating on at the main WPFD event is one titled “Understanding Electoral Information Flows: Mapping the Impact of Digital Technology from Network Disruptions to Disinformation” which is hosted by The Global Network Initiative (GNI). It  will map the different ways that digital technology impacts election-relevant information flows, as well as the inter-relationships between these impacts with the goal of developing a systems and data flowchart that can help policy makers, companies, elections administrators, elections observers, media, and other stakeholders identify and mitigate risks, improve planning and coordination, and enhance transparency around their efforts to support elections.
This will be followed by a CIPESA-organised  session titled “Keeping It On at Election Times: Navigating the Dilemma, Mapping Good Practices,” which will discuss trends and implications of network disruptions on journalists, activists, and civil society organisations. They will assess current efforts to address the policy gaps that exist and opportunities for expanding the network of advocates against internet shutdowns. Further, the session will explore and best practices of how countries can keep communications on at contentious times such as during elections.
The various sessions will include representatives from the World Web Foundation, Media Foundation for West Africa, Global Network Initiative (GNI), Addis Ababa University, Gobena Street / Addis Zebye, Committee for the Protection of Journalists (CPJ), International Media Support (IMS) and Facebook.
In Uganda, CIPESA will speak at a session titled “The impact of internet shutdowns on freedom of expression and the right to information during elections”. The Ugandan event is organised by the African Centre for Media Excellence (ACME) and various partners who include CIPESA, the Uganda Human Rights Commission, the American Embassy in Uganda, the Human Rights Network of Journalists, and Freedom House.
CIPESA World Press Freedom Day Sessions
Ethiopia: