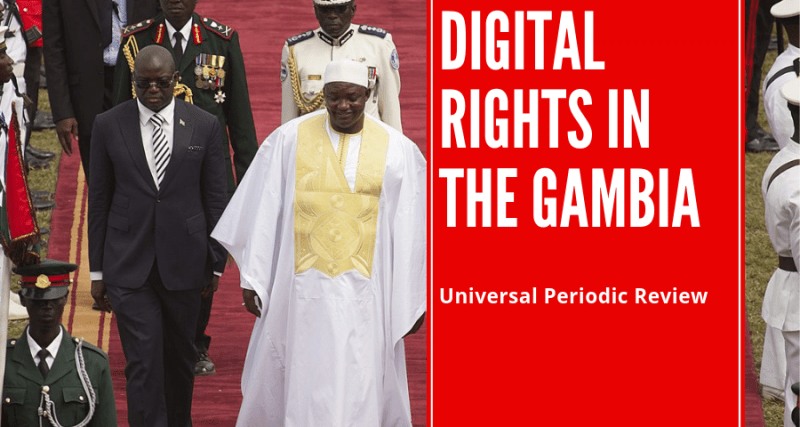 By Ashnah Kalemera |
In November 2019, The Gambia will be coming up for its third cycle review under the United Nations Universal Periodic Review (UPR) mechanism. Former President Yahya Jammeh, before his ouster in 2017, was renowned for his utter disregard for constitutional rights, once stating publicly that he would “not compromise or sacrifice the peace, security, stability, dignity, and the well-being of Gambians for the sake of freedom of expression.”
However, since the new administration of Adama Barrow took office in January 2017, the government has made public its intention to review and revise the current regulatory framework for press freedom and freedom of expression. Indeed, in June 2017, the new Attorney General and Justice Minister Abubacarr Tambadou conceded at the Constitutional Court that the charge of “sedition” under a law that had been frequently used to silence journalists and critics under the former regime was unconstitutional.
Later in February 2018, the Economic Community of West African States (ECOWAS) Community Court ruled that Gambian authorities should repeal sections of the Criminal Code on libel (Sections 178 & 179), sedition (Sections 51& 52), false news (Sections 59 & 181) and false publication on the internet (Section 173). Following this ruling, the government of The Gambia indicated its intention to “honour” the judgement after review by the Ministry of Justice and other relevant authorities.
As The Gambia’s online user base increases, it becomes increasingly important for UPR recommendations at the upcoming review to reflect explicitly the need for the rights to freedom of opinion and expression, and to privacy to be protected online as well as offline, in line with the state’s obligations under Articles 17 and 19 of the International Covenant on Civil and Political Rights (ICCPR).

What is the UPR?  It’ is a full assessment of a country’s human rights. Every United Nations (UN) member state has its human rights record assessed, and all UN member states are involved in the review process. It happens every four-and-a-half years, for every state.

As part of the Internet Freedom in Africa and UPR project, the Collaboration on International ICT Policy for East and Southern Africa (CIPESA), Small Media, The Gambia Press Union, Give1 Project Gambia and the YMCA Computer Training Centre, and Digital Studio have made a joint stakeholder submission on digital rights in The Gambia. The submission focuses on freedom of expression, freedom of information, right to equal access and opportunity, as well as data protection and privacy. It explores relevant developments since the previous UPR review in October 2014 and makes the following recommendations: