By Alliance For Affordable Internet |

Uganda’s government has passed a new tax that will require citizens to pay UGX 200 (US$0.05) per day in order to use messaging and voice over-the-top services (OTTs), including Facebook, WhatsApp, Twitter, and Viber. The tax, slated to take effect on 1 July, will push the cost of basic internet access further out of reach for millions of low-income Ugandans. The government must take urgent action to reverse this measure.

The Excise Duty (Amendment) Bill 2018, passed last week by the Ugandan Parliament, calls for telecommunications service operators providing data used to access OTTs to pay an excise duty on this access. According to Reuters, the country’s mobile network operators are likely to pass these costs on to consumers, levying a daily tax on each SIM card used to access the relevant platforms and services. The impact on consumers in Uganda — and particularly on low-income users — will be significant, and is likely to force many of these users to curb their internet usage, or to forego access entirely.

Only five other countries in Africa (where data was available) have more expensive mobile internet plans than Uganda. At the end of 2016, a 1GB mobile broadband plan in Uganda cost more than 15% of average monthly income. This high cost is keeping Ugandans offline — according to the GSMA, individual mobile internet subscriber rates in Uganda stand at just 18% of the population.

The true cost to connect is even higher for those earning less than the average national income (i.e., less than US$630/year). For the lowest income group in Uganda (see graph below), purchasing the same 1GB plan costs them 30% of their average monthly income. With the excise duty in place, this cost to connect for Uganda’s poorest will jump by 10%, resulting in just 1GB of data costing them nearly 40% of their average monthly income. The richest Ugandans will also experience an increase of 1% in their cost to connect, and by and large, this new excise duty disproportionately and negatively impacts low-income Ugandans and their ability to affordably access the internet. 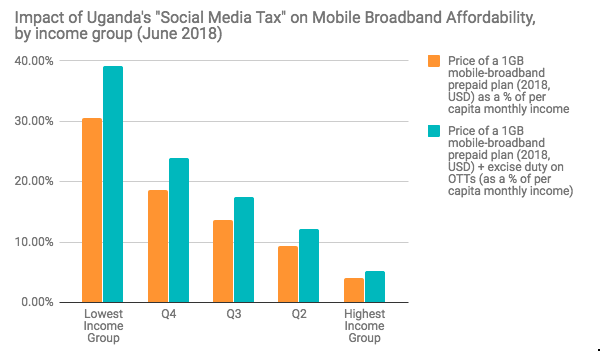 he Ugandan government has argued that such a tax is necessary both to reduce gossip (“lugambo”) on these platforms, and to raise funds needed to address the impacts of comments made on social media that are critical of the government. However, it has not provided any explanation as to how such a tax might change what people say on the platforms, nor how the funds collected would be used to address these impacts.

The government has also argued that this tax will help promote local content development by placing a tax on “imported content.”  As consumers increasingly shift toward data-based services, mobile operators will have new opportunities to develop and offer their own OTT services on their networks. However, the current language in the bill makes the duty applicable to all voice and messaging OTTs, including those that could potentially be developed by mobile operators or Ugandan firms. This is precisely why regulators in other countries have opted not to intervene on OTTs — so that local companies can innovate and create jobs and value in the telecoms market. The government of Nigeria, for example, previously considered a tax on internet use, which was eventually scrapped as a result of studies showing it would make access unaffordable for millions of people.

Stifling internet uptake and use is also likely to result in failure to achieve the goals laid out in the Digital Uganda Vision.The ICT sector contributed 3.4% to Uganda’s GDP in 2015, and increasing internet access has the potential to spur significant socio-economic growth — a recent study showed that a 10% increase in mobile broadband penetration can increase economic growth by nearly 3%.

We urge the government of Uganda to:

By focusing instead on these areas, the government can have a far more positive impact on increasing internet access, and promoting local content development and innovation.