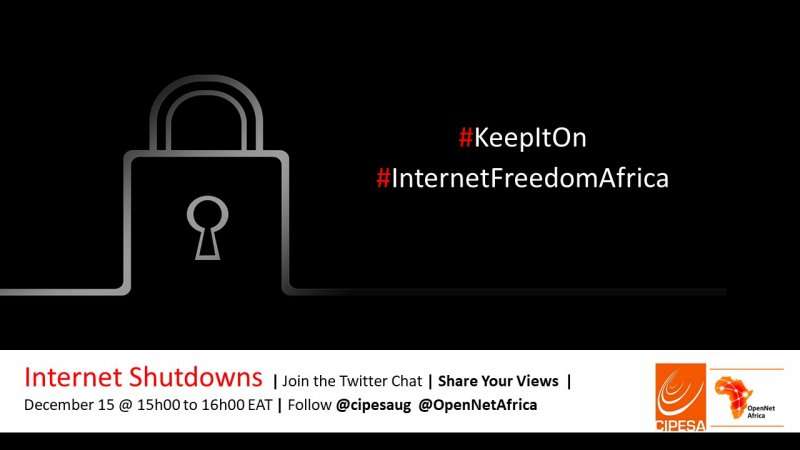 Online Chat |
On Friday December 15, 2017, the Collaboration on International ICT Policy for East and Southern Africa (CIPESA) will spend some time sharing insights on internet shutdowns. Between 15h00 and 16h00 East African Time (EAT) we will explore the spate of shutdowns affecting Sub-Saharan Africa and the efforts to navigate them.

We will also share insights on the economic impact of internet shutdowns with reference to a new framework we developed on calculating the Economic Impact of Internet Disruptions in Sub-Saharan Africa
A few of the documented cases of deliberate interruption of digital communications in sub-Sahara Africa in December thus far include an ongoing shutdown in Anglophone regions of Cameroon which as of today has run for 75 days. An earlier shutdown in the same region lasted 93 days. This week also Ethiopia experienced interruptions to its communications – primarily Facebook, Whatsapp and Twitter due to protests in the Oromia region. Further afield, in Yemen, there were reports of some internet filtering, blocking, throttling, and social media shutdowns.
Join the discussion and share your views on how we can #KeepItOn and protect #InternetFreedomAfrica