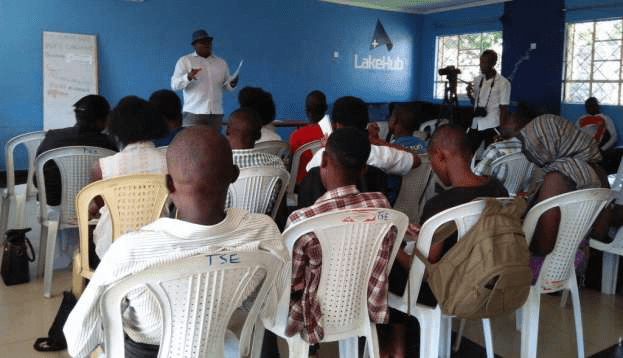 By Shitemi Khamadi |
In 2015, Allan Wadi, became the first Kenyan to be convicted of hate speech online. At a May 2017 training on internet and the law, he expressed gratitude for the opportunity to acquire skills and knowledge to avoid future arrest and prosecution. While he is currently facing an incitement to violence charge over a comment he made on Facebook in February 2016, he said he is now more aware of the extent of his rights and limitations with respect to the rights of others.
Wadi is however convinced that the various charges brought against him were unfair as many others who have made similar and according to him, graver comments online have gone unpunished. “I feel it was to set me as an example”, he remarked at the end of the training in Kisumu where 43 other youth including technology enthusiasts, communications students and bloggers were trained in the legal frameworks governing use of the internet in Kenya.

The objective of the training hosted by the Bloggers Association of Kenya (BAKE) in partnership with the Collaboration on International ICT Policy for East and Southern Africa (CIPESA) was to build participants’ understanding of rights and offenses related to the internet within the Kenyan legal context. The training was organized in light of shrinking rights of Kenya’s digital citizens in the face of new restrictive laws and increased arraignment of individuals for expressing online opinions which authorities deem in breach of the law, especially given the upcoming electioneering period.

Prior to the Kisumu training, a similar training was held in Nairobi where a Senior Prosecutor in the office of the Director of Public Prosecutions (DPP), Duncan Ondimu, was unequivocal that his office would be more vigilant on hate speech cases online, arrest any perpetrator and charge them in court. “We will not spare anyone,” said Ondimu who also serves as the Senior Prosecution Counsel. He added that the DDP had set up a 24 hour toll free line to for citizens to report hate speech offenses from social media posts that the office would follow up with investigations. Kenyans can also report offences to the DPP on Facebook and Twitter.

Furthermore, Ondimu stated that while the country had made gains in removing clauses in various laws that limited freedom of expression, provisions relating to defamation still exist. In 2016, Section 29 of the Kenya Information and Communications Act, Section 194 of the Penal Code and Section 132 of the Penal code were declared unconstitutional.

Mr. Wadi challenged the bloggers and social media users to become the main source of information even for the mainstream media in documenting events during the election. “You should also act like observers and update electorates of the voting and tallying processes from various tallying centres”, he asserted.

He also urged BAKE and similar actors to continue with capacity building efforts aimed at empowering bloggers and social media activists, as well as supporting them during litigation over offences.

The trainings were organized in the context of the ICT4Democracy in East Africa initiative as part of efforts to promote ICT enabled participation in governance pre and post elections in Kenya.