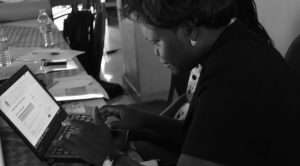 Local government officials from the northern Uganda districts of Gulu, Amuru and Nwoya were recently trained in the use of the online freedom of information portal Ask Your Government (AYG).  The officials have said the platform, which is accessed at www.askyourgov.ug, will be useful in improving the flow and exchange of information between their districts and the public. The training organised by the Collaboration on International ICT Policy for East and Southern Africa (CIPESA) in partnership with Northern Uganda Media Club (NUMEC) and was held August 31 in Gulu, Uganda. Participants at the training included Information Officers, Community Development Officers, Natural Resources Officers and an Assistant Chief Administrative Officer from the administrations of the three districts in the Acholi sub region.

The training aimed to promote the release of public information held by the state through the use of online tools but with a specific focus on the AYG portal. The portal was launched in 2014 by the Uganda Office of the Prime Minister in partnership with the Africa Freedom Information Centre (AFIC) and CIPESA and is aimed at supporting the Access to Information Act (2005) by enabling citizens to request and receive public information from government authorities.

“I was unaware of the website before the training. But I now know how to use it. I think it will be useful in the sharing of information between us in the local governments and the public,” said Anthony Onen, the Amuru District Population Officer. He added, “But we need more of our colleagues in other departments also trained on how to use the website … because these departments hold information that is important for the public.’’

Meanwhile, Santa Odwa, an Assistant Chief Administrative Officer (CAO) with the Gulu district local government, remarked: “The training on how to use this website will help improve sharing of information with the public but the public must also be sensitised on how to use it and what kind of information can be asked for and not asked for from us.”

The district officials were also taken through different laws in Uganda that govern citizens right to access information, particularly the Access to Information Act, 2005. The Act aims, among others, to promote transparency and accountability in organs of the state by providing the public with information, and to empower the public to scrutinise and participate in government decisions that affect them.

In the context of northern Uganda, transparency and accountability by public authorities and the involvement of the public in the scrutiny of the public organs is particularly important. In the last decade, the region has seen several post-conflict recovery projects funded by both the government of Uganda and donors aimed at rehabilitating the region following years of conflict.  Most of these projects have been implemented under the framework of the Peace, Recovery, and Development Programme (PRDP).

Due to a lack of public scrutiny and limited information available to the public about projects under the PRDP, substandard work and corruption impeded delivery of public services under PRDP. In 2012, the Auditor General uncovered the swindling of over 50 billion shillings (US$14.7 million) by officials, which may have been exacerbated by a lack of transparency in the operations of the programme.

In September, 2016, the government launched a UGX 233 billion (US$68.5 million) —Project Restoration of Livelihoods in Northern Uganda (PRELNOR). The seven-year project aims to improve livelihoods and construct community roads to link local communities in nine districts in the Acholi region to markets. This type of project underscores the continued need for the public to have access to information to empower them so they are in position to hold public organs and officials accountable.

According to the communications regulator, as of March 2016, there were approximately 21 million mobile phone subscriptions while 38.9% of Ugandans had access to the internet. These figures pose a great opportunity for citizens to find innovative ways to shape democratic governance, including to monitor government transparency. The AYG portal and other online platforms are increasingly gaining influence and becoming important channels to disseminate information, promote accountability and cause public debate around public service delivery issues in Uganda.

The training is part of activities by CIPESA, NUMEC and local partner radio stations to promote the right to information as a catalyst for service delivery monitoring in northern Uganda and in supported by the Indigo Trust.

Previous: Forum on Internet Freedom in Africa 2016 – My Testimony