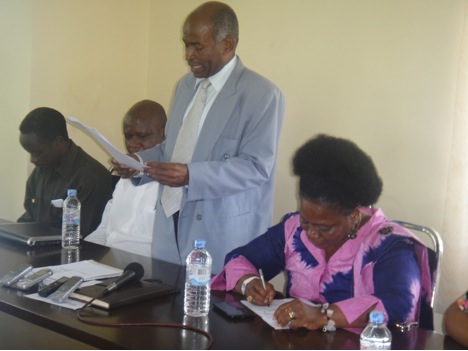 Growing the capacity of citizens and civic groups including human rights networks to use Information and Communication Technology (ICT) to foster free speech, human rights, access to information and open governance is one of the objectives of the ICT4Democracy in East Africa Network. Since April 2014, the Commission for Human Rights and Good Governance (CHRAGG) in Tanzania has conducted a campaign to raise awareness about the SMS for Human Rights system throughout Tanzania.
The system, which was launched on Human Rights Day in December 2012, has made it easier for citizens to report human rights violations to the Commission. In 2013, a total of 173,493 complaints were received through the system. Since then, the number of complaints filed with the Commission has averaged more than 100 per week compared to 10 per week prior to the system’s installation.
Given that CHRAGG has only four regional offices to cover a large country, the system has reduced the amount of time, inconvenience and cost to citizens for submitting complaints and following up on case progress, particularly for those in rural areas. The electronic case handling system has also eased the work of investigators by reducing their travel burden and enabling more efficient evidence gathering. Besides text message, the platform allows for video and image capabilities for complainants and informers.
The SMS for Human Rights System is a mobile phone based Complaints Handling Management Information System aimed at expanding CHRAGG’s case handling and tracking. An individual is able to file a complaint by texting the word ‘REPORT’ or ‘TAARIFA’ to the toll free number:  +255 (0) 754 460 259. The individual receives a text message confirming receipt of the complaint. Thereafter, a follow up phone call is made by investigators at the Commission to obtain further information, authenticate the report and assign the individual a reference number. The same number can be used to track the progress of a complaint by texting the word ‘STATUS’ followed by the reference number.
However, although many complaints are received through the system, many citizens, particularly on the semi-autonomous island of Zanzibar, were not aware of its existence.  With an estimated population of 45 million people, Tanzania has about 28 million mobile phone subscriptions representing a teledensity of 61 phones per 100 inhabitants.
The system’s awareness campaign launch in Zanzibar in April was officiated by CHRAGG’s Commissioner Zahor Kharmis. CHRAGG’s Director of Human Rights Francis Nzuki and Wilfred Warioba, the Head of Management Information System Unit demonstrated how the system works and fielded questions from the attendees who included journalists, representatives from civil society organisations and ordinary citizens.
The event was televised live on Television Zanzibar (TVZ) and broadcast on Coconut FM radio station. It was also featured on Zanzibar Broadcasting TV and Radio, Independent TV, Radio Coconut, Radio Chuchu, Radio Hits, Radio Zenj, Radio Alnoor and two local print newspapers.
Since the launch, two public awareness meetings have been held in the North Unguja and Urban West regions of Zanzibar island. Furthermore, five similar events have been held in Mtwara, KilwaKivinje, Pwani and Dar es Salaam regions on the mainland.
In addition to the meetings, over four million print leaflets have been distributed encouraging citizens to seek redress for human rights violations particularly in the areas of poor service delivery, police brutality, corruption and employment rights.
The awareness raising campaign is expected to cover at least 18 more regions in the coming months. It is expected to incorporate nationwide TV and radio talk shows as well as social media as part of its outreach campaign.
Established in 2001 in fulfillment of Tanzania’s national constitution, CHRAGG plays the dual role of an ombudsman and a human rights commission for the protection and promotion of human rights as well as good governance.
CHRAGG is a member of the ICT4Democracy in East Africa Network whose work is supported by the Swedish International Development Cooperation Agency (Sida) and the Swedish Programme for ICT in Developing Regions (Spider). The network is coordinated by the Collaboration on International ICT Policy in East and Southern Africa (CIPESA).