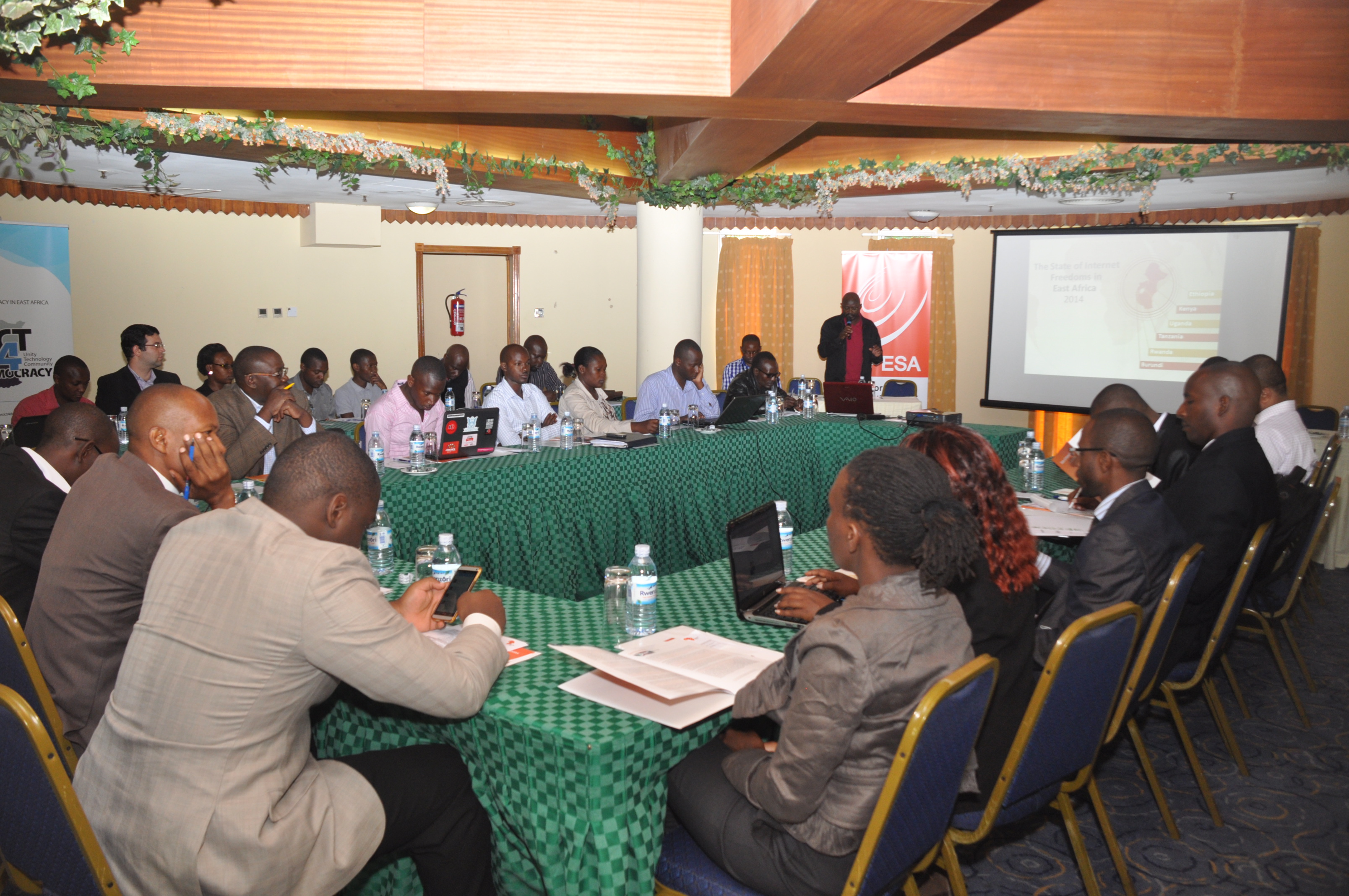 By Edris Kisambira
On May 23, 2014, the Collaboration on International ICT Policy in East and Southern Africa (CIPESA) launched a report on the State of Internet Freedom in East Africa. The report is an investigation into the policies and practices that define internet freedom in the region. The event, which took place in Kampala, Uganda, was attended by ICT thought leaders, media and human rights activists from Uganda, Rwanda, Kenya, Tanzania, Burundi and Nigeria, among others.
A number of East Africa countries such as Kenya, Tanzania, Uganda and Rwanda boast over 50% teledensity and a growing number of internet users.
But as internet user numbers grow, so does content questioning governments’ democratic credentials. In turn, governments are enacting laws to counter freedom of expression, including online. These curtails are often framed under the guise of fighting terrorism, cyber crime and hate speech.
The CIPESA report noted that, regrettably, despite increased usage of the internet and infringements on freedoms, East Africans are not engaging enough in discussions around the issues of internet freedoms.
In his keynote address at the launch, the Chairperson of the ICT Committee in Uganda’s parliament, Vincent Waiswa Bagiire, noted that internet use by East African citizens has grown exponentially over the last five years. Considering the importance of the internet to improving livelihoods, the economy, and to security and stability, it had become necessary to make regulations to govern the online space.
“The issue becomes whether the rules are fair, inclusive, allow the growth of the internet and associated digital technologies, or whether they suppress citizens’ rights and creativity, lock out some sections of society and stifle creativity and innovation,” said Bagiire.
Panel discussions centred on how to find a balance between users’ freedoms and national security, as well as on online safety, security and privacy.
Arnold Mangeni, the Data Centre Manager at the National Information Technology Authority of Uganda (NITA-U) noted that when one goes online, they need not to expect security and privacy granted at the same time. He added that governments are mandated to protect citizens and as such have to curtail some freedoms while protecting citizens.
This sentiment was in sharp contrast to that of Neil Blazevic from the Pan African Human Rights Defenders Network. He encouraged citizens to take more active measures to ensure their privacy and security both offline and online. “Privacy is something we rely on in basic existence without which we face an existential crisis,” he said.
Patrick Mutahi, a Safety & Security Programme Officer from Article 19 Kenya raised the concern that while pursuing national security, governments are collecting citizen’s personal information during SIM card and national Identity registration exercises with no regulations on how this information is used. He further said governments are moving to curtail some of the freedoms because of vices like hate speech.
Lydia Namubiru, a Programme Officer at the African Centre for Media Excellence (ACME), said privacy and security online, like transport infrastructure for example, was a public service and should be guaranteed by governments. She said government surveillance online is akin to “placing a police officer at someone’s bedroom window”.
Panelists pointed to a need for competent judicial authorities to provide oversight over surveillance and monitoring. They also called for governments to consult citizens in enacting laws related to internet freedoms.
It was also pointed out that individuals and the private sector should take responsibility for their own online privacy and security.
“The Police alone cannot protect everyone online. The private sector has got to play a major role too. For example the problem of unsolicited SMS messages and online fraud where people lose millions of shillings in bogus transactions,” said Jimmy Haguma, the Acting Commissioner for Electronic and Counter Measures, Uganda Police Force.
He was backed by legislator Bagiire who said online safety is complex and needs continuous stakeholder collaborative efforts and user sensitisation efforts.
“Whereas government will put in place laws to protect users like the Computer Misuse Act and the e-signatures Ac, we the individuals have to be careful online,” he said.
Conducted between January 2010 and April 2014, CIPESA’s research found that the state of internet freedom in East Africa is littered with legislation and state actions which contradict constitutional rights provisions.
The legacy of colonial laws still lingers in countries like Tanzania and Uganda where public information disclosure is severely restricted. Besides, some laws, without being explicit on the internet and related technologies, are used in contexts that they were not intended for. Meanwhile, in Kenya, Rwanda and Burundi, hate speech content regulations posed a threat to internet freedoms. In Ethiopia, the state monopoly over telecommunications was found to enable mass surveillance and content filtering, particularly that of the regime’s critics.
The full report can be found here.