The Forum on Internet Freedom in Africa (#FIFAFRICA) is a landmark event that convenes various stakeholders from the internet governance and online rights arenas in Africa and beyond to deliberate on gaps, concerns and opportunities for advancing privacy, access to information, free expression, non-discrimination and the free flow of information online on the continent.
Click here to see the event information.

By Juliet Nanfuka |
On May 2, a total of 27 Ugandan journalists were trained in digital security procedures. The training was held in commemoration of World Press Freedom Day (May 3), which this year was celebrated under the theme “Let Journalism Thrive! Towards Better Reporting, Gender Equality, and Media Safety in the Digital Age”.
The training, which was organised by the Collaboration on International ICT Policy in East and Southern Africa (CIPESA) in partnership with Uganda Journalists Union (UJU) and the East and Horn of Africa Human Rights Defenders Project (EHARDP), explored the status of journalism in Uganda as well as the legal and regulatory frameworks affecting freedom of expression in the country. Participants at the training workshop represented print, online and broadcast media houses from across Uganda.
During the training, it emerged that some journalists are not cautious about their online security, similar to those in a previous training hosted by CIPESA. The reuse of one password across different websites and platforms, and overexposure of personal information online were common among the training participants. Email encryption, the use of Virtual private networks (VPNs) and Multi Factor Authentication for passwords, were taught as skills that can aid journalists when investigating sensitive stories that may be prone to surveillance.
Norman Katende, an international award winning journalist, shared his experiences of being threatened while reporting on controversial stories and encouraged journalists to practice caution both online and offline. He questioned how journalism can thrive in the face of police attacks on the media, noting that journalists should not compromise on their security when covering sensitive stories just to earn a living.
According to the Committee to Protect Journalists (CPJ), an international organisation that defends the rights of journalists, over the past two decades, 1125 journalists across the world lost their lives while reporting or investigating stories. The medium increasingly used by journalists to source and disseminate information is the internet.
Last month, Somalia journalist Daud Ali Omar and his wife were murdered. The same month, Kenyan journalist Johan Kituyi, proprietor of the newspaper Mirror Weekly, which has covered controversial national issues, was also murdered.
Increasingly, online publishers and bloggers are also coming under attack in Africa. For instance, a year after their arrest, the Ethiopian Zone9 bloggers remain behind bars and in Burundi, civil unrest related to upcoming elections has led to government restrictions of information flow through various media houses – and radio stations.
Such attacks necessitate digital safety skills for journalists. “When you look at the level of knowledge on ICT that a journalist has – it’s really basic. We have several unsecured email accounts and we visit any website without [considering] security,” noted a journalist at the training in Kampala.
Journalists noted that they do not always exercise their rights and do not request security from their media houses when pursuing sensitive stories. They also indicated a lack of awareness of the laws in place that can aid them in developing stories, such as the Access to Information Act (2005), which compels Ministries, Departments and Agencies to release information.
Following a CIPESA presentation on the legal and regulatory frameworks affecting internet freedom, especially freedom of expression online in Uganda, a Soroti-based journalist said the training had made him re-evaluate how he used his mobile phone and the internet, saying that he had been using these tools “without considering their implications.”
Further to the commemoration of World Press Freedom day, CIPESA participated in the “Digital safety for journalists” plenary session of the global event hosted by UNESCO.  CIPESA and its partners in various countries were also involved in a series of Twitter engagements which explored press freedom, including in the digital world, particularly for African journalists.
The training was conducted in the context of CIPESA’s OpenNet Africa initiative that promotes internet freedom in Africa and is supported by the Open Technology Fund, Hivos and the Association for Progressive Communications (APC).

(Updated)
Since 2013, the Collaboration on International ICT Policy for East and Southern Africa (CIPESA) has been coordinating the OpenNet Africa projectwhich is aimed at monitoring and promoting internet freedoms, primarily in East and Southern African states.
As part of the initiative’s 2015 strategies, Outbox community has been chosen to undertake certain in-country activities.
To this end, on Thursday 16th April, 2015, from 5:00 PM to 7:00 PM, a team from CIPESA will meet-up with selected techies with knowledge of Internet usage and security, to share about what OpenNet Africa is, what objectives we want the techies to test, what to test and what success would look like after the test.
Tools to be used:

All these tools are open source and should be easily available online.
Participants will be supported for 3 weeks to work on their ideas with support from mentors after which there will be a pitching event to showcase the test/familiarisation findings and localisation ideas to adapt/ improve the tools.
Judges will determine participants with the best findings and localisation ideas for prizes.
If you would like to participate, please apply here and wait for confirmation email.
OpenNet Africa is aimed at monitoring and promoting internet freedoms, primarily in East and Southern African states.
The objective is to provide a centralised platform that acts as a focal point for information on African internet freedoms and cyber security. OpenNet Africa therefore provide access to research materials on internet freedom, legal regimes on internet openness or the lack of it, censorship incidents, African initiatives that are promoting internet rights, and policy advocacy materials. Learn more…

ICT4Democracy– iParticipate Uganda. This project has support from Spider to October 2014 and from Sida to December 2014. Activities will include documenting and publicising the benefits of open governance to citizens and the media; training of media and civil society in the use of ICT tools to promote citizen participation; provision of support to grassroots public access centres; policy analysis on Kenya, Tanzania and Uganda; research on ICTs and governance; and research dissemination.
Coordination of the ICT4Democracy in East Africa Network. With funding from Sida (January 2014-December 2014), CIPESA will manage this project which involves the disbursement of funds for the activities of the following partners: the Commission for Human Rights and Good Governance (Tanzania), iHub Research (Kenya), the Kenya Human Rights Commission, Women of Uganda Network, Toro Development Network, Transparency International Uganda, and CIPESA.
Promoting internet freedoms: This project continues from 2013. It has support from Hivos (January and February 2014), and from the University of Toronto (January 2014-October 2014). Activities will include finalising research on internet freedoms policies and practices in Burundi, Ethiopia, Kenya, Rwanda, South Africa, Tanzania, and Uganda; documenting internet rights violations and maintenance of the www.opennetafrica.org portal as the one-stop resource on online freedoms in Africa.
Leveraging Open Data and the Right to Information to Promote Service Delivery: The purpose of the project is to empower citizens in East Africa to use the RTI law to lodge requests and document their experiences through the use of Information and Communication Technologies (ICTs). The project also aims to undertake awareness-raising and network building activities to promote the right to information in Kenya, Uganda and Tanzania. The work is supported by the Open Society Institute from January 2014 to December 2014. 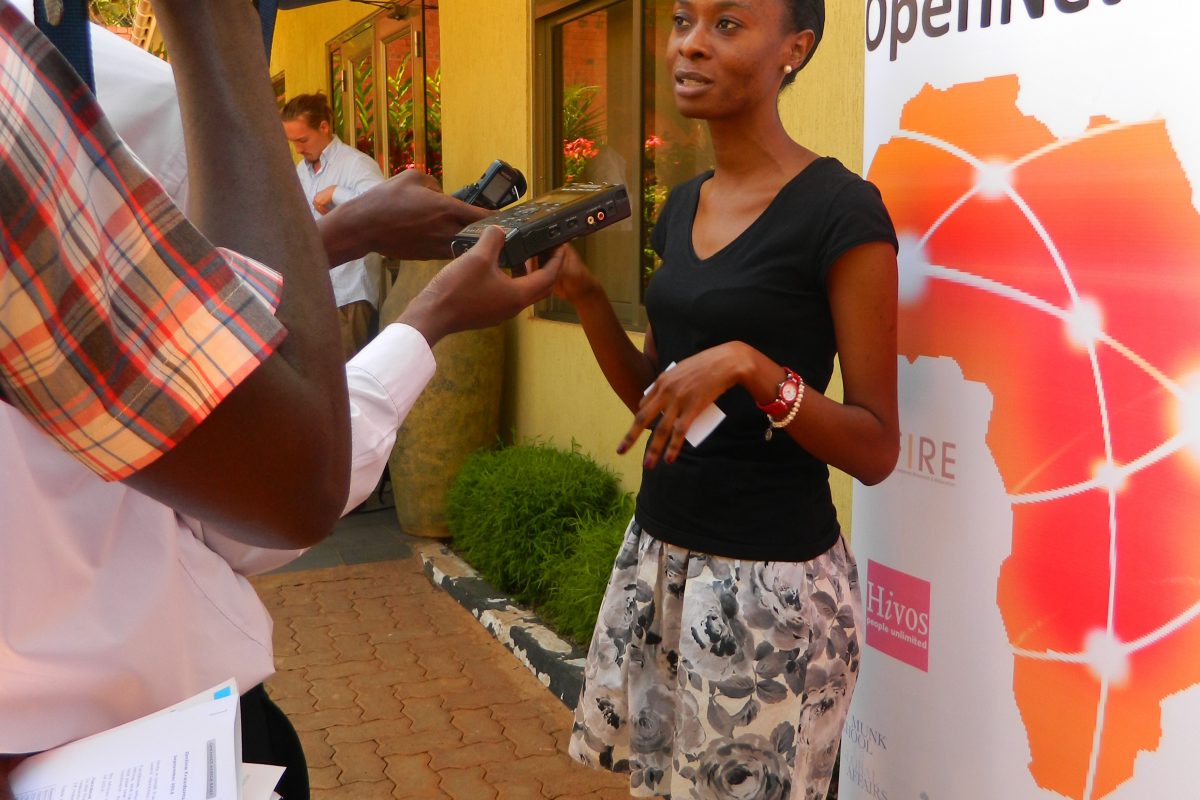 The Collaboration on International ICT Policy in East and Southern Africa (CIPESA, www.cipesa.org) in conjunction with Unwanted Witness Uganda (www.unwantedwitness.or.ug) on November 28, 2013 organised a workshop on promoting internet rights in Uganda. The workshop aimed to create awareness among civil society, netizens, and the media in Uganda on how policy and practice affect internet freedoms in the country. The workshop also sought to draw up strategies for network building and advocacy to promote and protect online freedoms in Uganda.
Download the workshop report here.