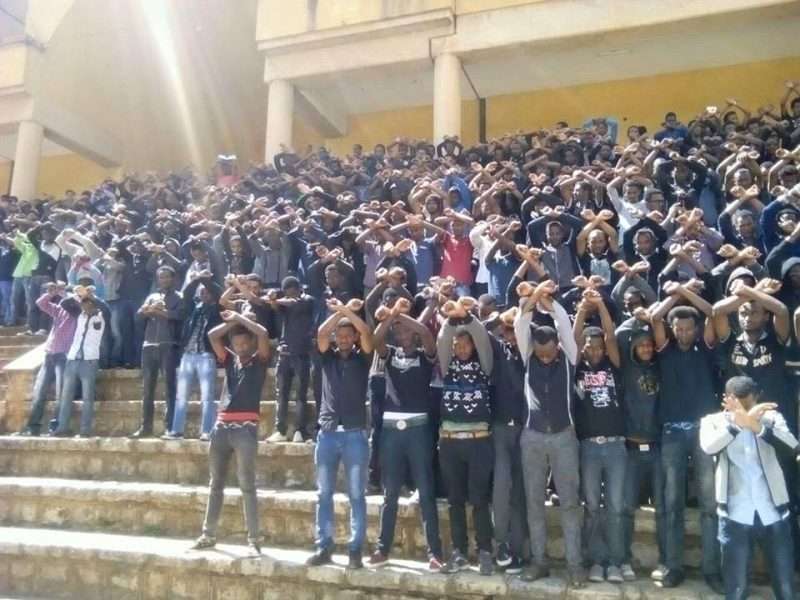 By Nwachukwu Egbunike |
Africa’s landscape of online free speech and dissent is gradually, but consistently, being tightened. In legal and economic terms, the cost of speaking out is rapidly rising across the continent.
While most governments are considered democratic in that they hold elections with multi-party candidates and profess participatory ideals, in practice, many operate much closer dictatorships — and they appear to be asserting more control over digital space with each passing day.
Cameroon, Tanzania, Uganda, Ethiopia, Nigeria, and Benin have in the recent past witnessed internet shutdowns, the imposition of taxes on blogging and social media use, and the arrest of journalists. Media workers and citizens have been jailed on charges ranging from publishing “false information” to exposing state secrets to terrorism.
At the recent Forum of Internet Freedom in Africa (FIFA) held in Accra, Ghana, a group of panelists from various African countries all said they feared African governments were interested in controlling digital space to keep citizens in check.
Many countries have statutes and laws which guarantee the right to free expression. In Nigeria, for example, the Freedom of Information Act grants citizens the right to demand information from any government agency. Section 22 of the 1999 Constitution provides for freedom of the press and Section 39 maintains that “every person shall be entitled to freedom of expression, including the freedom to hold and to receive and impart ideas and information without interference…”
Yet, Nigeria has issued other laws that authorities use to deny these aforementioned rights.
Section 24 of Nigeria’s Cybercrime Act criminalises “anyone who spreads messages he knows to be false, for the purpose of causing annoyance, inconvenience, danger, obstruction, insult, injury, criminal intimidation, enmity, hatred, ill will or needless anxiety to another or causes such a message to be sent.”
Making laws with ambiguous and subjective terms like “inconvenience” or “insult” calls for concern. Governments and their agents often use this as a cover to suppress freedom of expression.
Who determines the definition of an insult? Should public officials expect to develop a thick skin? In many parts of the world, citizens have the right to criticise public officials. Why don’t Africans have the right to offend as an essential part of free expression?
In 2017 and 2016, Nigerian online journalists and bloggers Abubakar Sidiq Usman and Kemi Olunloyo were each booked on spurious charges of cyber-stalking in connection with journalistic investigations on the basis of the Cybercrime Act.

The very existence of these legal challenges tells citizens that their voices matter. From Tanzania’s prohibition on spreading “false, deceptive, misleading or inaccurate” information online to Uganda’s tax on social media that is intended to curb “gossip”, the noise made on digital platforms scares oppressive regimes. In some cases, it may even lead to them to rescind their actions.
The experience of the Zone9 bloggers of Ethiopia provides a powerful example.
In 2014, nine Ethiopian writers were jailed and tortured over a collective blogging project in which they wrote about human rights violations by Ethiopia’s former government, daring to speak truth to power. The state labeled the group “terrorists”for their online activity and incarcerated them for almost 18 months.

Zone9 members Mahlet (left) and Zelalem (right) rejoiced at the release of Befeqadu Hailu (second from left, in scarf) in October 2015. Photo shared on Twitter by Zelalem Kiberet.

Six members of the now liberated group made their premier international engagement in Ghana during FIFA conference: Atnaf Berhane, Befeqadu Hailu Techane, Zelalem Kibret, Natnael Feleke Aberra, and Abel Wabella were all in attendance. Jomanex Kasaye, who had worked with the group prior to the arrests (but was not arrested) also attended.
Several members had collaborated with Global Voices to write and translate stories into the Amharic. As members of the community, Global Voices campaigned and mobilised the global human rights community to speak out about their case from the very first night they were arrested.
After months of writing stories and promoting their case on Twitter, international condemnation of their arrest and imprisonment began to flow from governments and prominent human rights leaders, alongside hundreds of thousands of online supporters. From the four-compass points of the world, a mighty cry arose demanding the Ethiopian government to free the Zone9 bloggers.
In their remarks at FIFA, the bloggers said that their membership in the Global Voices community was key to visibility during their time in prison. In their panel session, they credited Global Voices’ campaign for keeping them alive.
Berhan Taye, the panel moderator, asked the group to recount their prison experiences. As they spoke, the lights on the stage dimmed. Their voices filled the room with a quiet power.
Abel Wabella, who ran Global Voices’ Amharic site, lost hearing in one ear due to the torture he endured after refusing to sign a false confession.
Atnaf Berhane recalled that one of his torture sessions lasted until 2 a.m. and then continued after he had a few hours of sleep.
One of the security agents who arrested Zelalem Kibret had once been Kibret’s student at the university where he taught.
Jomanex Kasaye recounted the mental agony of leaving Ethiopia before his friends were arrested — the anguish of powerlessness — the unending suspense and fear that his friends would not make it out alive.

With modesty, the Zone9 bloggers said: “We are not strong or courageous people…we are only glad we inspired others.”
Yet, the Zone9 bloggers redefined patriotism with both their words and actions. It takes immense courage to love one’s country even after suffering at its hands for speaking out.
Ugandan journalist Charles Onyango-Obbo, also in attendance at FIFA, shared an Igbo proverb popularised by Nigerian writer Chinua Achebe which says:

Since the hunter has learned to shoot without missing, Eneke the bird has also learnt to fly without perching.

In essence, he meant that in order to keep digital spaces free and safe, those involved in this struggle must devise new methods.
Activists on the front lines of free speech in sub-Saharan Africa and across the globe cannot afford to work in silos or go silent in frustration and defeat. With our strength and unity, online spaces will remain free to deepen democracy through vibrant dissent.

“Since men have learned to shoot without missing, we have to learn to fly without perching” — African Proverb

By citing these words in his opening message, Dr. Wairagala Wakabi, the Executive Director of the Collaboration on International ICT Policy in East and Southern Africa (CIPESA), captured both the daunting reality and the irrepressible optimism surrounding the state of Internet freedom in Africa. This dynamic was also captured in Charles Onyango-Obbo’s keynote address, “Many African Governments Hate the Free Internet — And That Is A Very Good Thing.”

I was fortunate to represent the Global Network Initiative at the 5th Forum on Internet Freedom in Africa (FIFAfrica18) in Accra, Ghana from September 27–28, 2018. The event, co-hosted by CIPESA and the Ghana-based Media Foundation for West Africa (MFWA), featured a range of activists, academics, journalists, and government representatives from across the continent and the world discussing topics like censorship, big data, and gender-based violence online. While the topics were familiar to me, FIFAfrica18 offered a unique opportunity to hear fascinating African perspectives, narratives, and stories that are often absent from larger, more international Internet freedom conferences.

Over the two days, it became clear that while authoritarian governments in Africa may have come late to the Internet repression party, they are quickly catching up thanks to their own creative tactics, as well as foreign technology and knowledge transfer. As Onyango-Obbo noted in his keynote, African dictators are weaponizing the Internet for political purposes through the control and manipulation of a new digital bureaucracy (or as he calls it, the “digitocracy” and the “surveillance securitocracy”). Other speakers pointed out how anti-terrorism laws — sometimes left-over colonial versions, in other instances newer, Global War on Terror-inspired copies are being misused — to prosecute speech that should be protected. It was also pointed out that long legacies of information manipulation, combined with the fragility of the free press, have left many African countries susceptible to disinformation campaigns.

Other tactics are more creative. For instance, Tanzania and Uganda have pioneered taxes on social media and blogging respectively, which other governments are now seeking to replicate. And of course, when threatened, these regimes have not been afraid to order brute force network disruptions. Interestingly, the case was also made that the success that some repressive regimes are having with “fake news” may be leading them away from more scorched earth tactics like Internet shutdowns.

These efforts to clamp down on online freedom are often aided and abetted by technology and services procured from outside Africa. The role of China in financing and providing information and communication infrastructure that is perceived to facilitate state surveillance was a consistent topic across the sessions I attended. In addition, participants decried the increasing availability of more targeted hacking tools, peddled by Western and Israeli firms.

The combined power of these two forces — unreliable infrastructure and targeted hacking software — have been perhaps most prominently displayed by the government of Ethiopia, and FIFAfrica18 offered a fascinating opportunity to hear from the Zone 9 bloggers, a group of independent activists who were on the receiving end of their government’s oppression for several years until their recent release. Appearing as a group outside Ethiopia for the first time, the bloggers offered lessons from their experience, including the importance of solidarity, appreciation for support from activists abroad and diplomats at home, and gratitude to social media platforms for limiting the extent to which the government could persecute others in their networks. Perhaps more important though, was the inspiration they engendered through their ongoing commitment to continue to fight for human rights in Ethiopia and beyond.

Consistent with these notes of optimism and defiance were demonstrations of new tools like Netblock’s COST (Cost of Shutdowns Tool), which is already being used to underscore the disproportionate impacts of network disruptions in Chad and Ethiopia, and the power of collaborations like AccessNow’s #KeepItOn campaign. Building on the addition of several, new, Africa-focused members — CIPESA, Internet Sans Frontieres, and Paradigm Initiative– the Global Network Initiative hopes to do its part to harness this creative energy and facilitate new partnerships between the private sector and digital rights groups in Africa.

At the end of the day, the enduring commitment to freedom demonstrated by the Zone 9 bloggers, which was echoed across the Forum by brave journalists, committed activists, human rights commissioners, and others from Cameroon, Kenya, Zimbabwe and across Africa, that helped me understand and appreciate the intrepid spirit behind that admonition to learn to keep flying without perching, even if your wings grow tired.