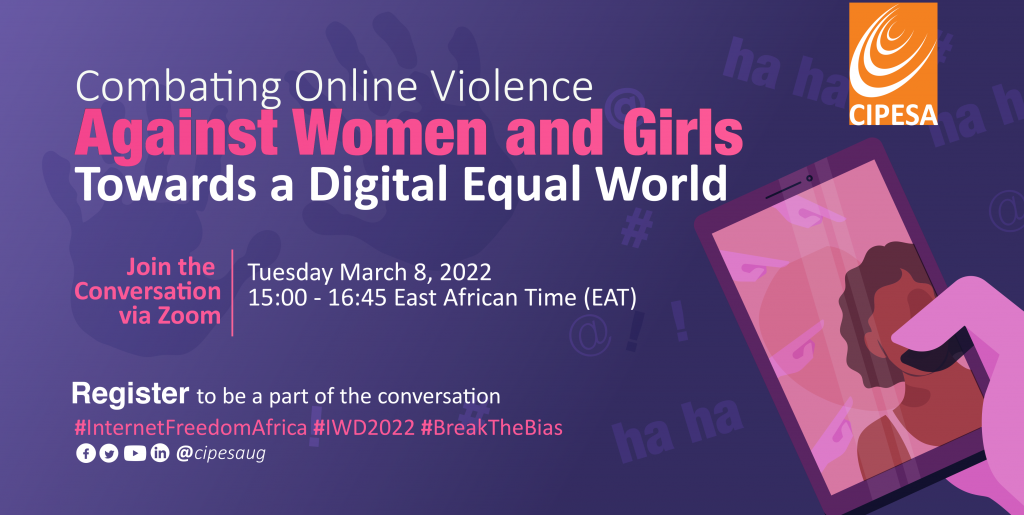 Sustainable Development Goal five aims to achieve gender equality and empower all women and girls. Target 5B calls for enhancing the use of enabling technology, in particular information and communications technology, to promote the empowerment of women. However, women in eastern Africa face various challenges that undermine their use of digital technologies, with these challenges tending to mirror the impediments that they face in the offline world, such as in access to education and economic opportunities, or participation in civic processes. There is also a wide gender digital divide in the region. For instance, in Uganda men are 43% more likely to be online than women. In Kenya, a study found that in the slums of the capital Nairobi, only 20% of women were connected to the internet, compared to 57% of men.

Despite a large gender disparity in digital access, more women face various forms of online violence than their male counterparts. The absence of laws designed to specifically address the various forms of digital violence (such as “revenge pornography”, trolling, and threats) and the lack of sufficient in-country reporting mechanisms, exacerbate these being forced to go offline or resorting to self-censorship. Research by CIPESA has found that cyberstalking, online sexual harassment, blackmail through non-consensual sharing of personal information, promotes and normalises violence against women and girls who use the internet in Uganda.

However, these digital threats and attacks remain difficult to quantify due to several inhibitions including the culture of silence and the absence of structured reporting mechanisms. Nonetheless, there have been various documented cases of online harassment and abuse. In a study conducted in Kenya, more than one in five women reported having experienced online harassment. Meanwhile, redress mechanisms were insufficient, as the national legal framework safeguarding security online is broad, “and does not pay special attention to women and girls.”

The true extent of online violence against women (OVAW) remains unknown, partly due to cultural inhibitions, lack of data and lower levels of internet access among women. However, as more women go online, the cases are increasing, yet there are insufficient safeguards to enable victims to protect and enhance their personal security, including the absence of laws prohibiting online violence against women. Moreover, such cases continue to go unreported, leaving victims with limited legal recourse or resources to seek justice. Further, many women are uninformed of their rights online and are not aware of the tools available to secure themselves online.

According to a 2020 UN Women report, women in politics and the media are at higher risk of online and ICT-facilitated violence due to their public personas.  Indeed, research related to Uganda’s 2021 elections found that men and women politicians experienced online violence differently: women, especially candidates in elections, were more likely to experience trolling, sexual remarks, and body shaming, while men were more likely to experience hate speech and satirical comments. This mirrored Previous findings in the region that also found that women who are more prominent online and in society appeared to be targeted more, with the women who advocated for gender equality, feminism, and sexual minority rights facing heightened levels of  OVAW. This undermines the ability of women to embrace and meaningfully use digital technologies.

The UN Women report also cites evidence  suggesting  that  women  with  multiple identities (such as the LBTQI community, ethnic minority, indigenous) are often targeted online through  discrimination and hate speech, which often forces them to  self-censor  and  withdraw  from  debates and online discussions. Similarly, the UN Special Rapporteur on violence against women, its causes and consequences, has stated that some  groups  of  women,  including human  rights  defenders,  women  in  politics, journalists, bloggers, women belonging to ethnic minorities, indigenous women, lesbian, bisexual and transgender women, and women with disabilities are particularly targeted by ICT-facilitated violence.

The extent to which cyber harassment affects women in marginalised communities in the region is not well known. However, interviews conducted in 2019 as part of digital literacy and security training for refugee rights defenders, from the Democratic Republic of Congo, Eritrea, South Sudan and Sudan, who are living in Uganda, showed that three in four of the respondents had experienced some form of cyber harassment including abuse, stalking, unwarranted sexual advances and hacking of social media accounts. The perpetrators included anonymous individuals, security agents in their home countries, known friends and ex-partners. These online affronts against the women refugees run in parallel to gender-based violence in refugee camps, at border crossings and resettlement communities. Urban refugees in the country face heightened gender-based violence risks due to unmet multiple and complex social, economic and medical needs as well as intersecting oppressions based on race, ethnicity, nationality, language, sexual orientation and gender identity.

On the occasion to mark the International Women’s Day, 2022 the Collaboration in International ICT Policy for East and Southern Africa (CIPESA) has organised a webinar to foster multi-stakeholder dialogue on OVAW towards promoting women’s ability to meaningfully participate in the information society, democratic and decision making processes. The webinar will also serve as an opportunity to promote engagement between platforms operator Meta, user communities and stakeholders, and to collect feedback and strategize on how to mitigate harm online.