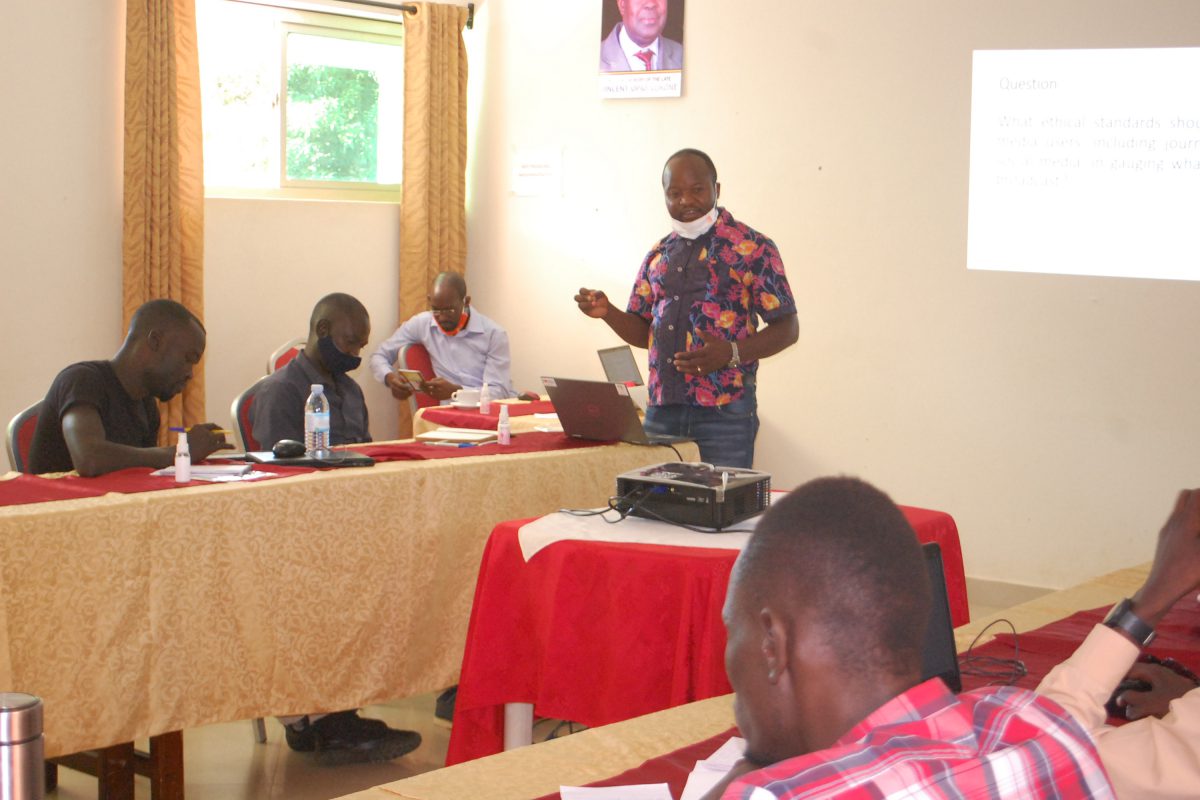 Elections are an essential democratic process during which citizens need access to a range of credible information in order to participate meaningfully and to make informed choices. But elections can also be highly charged affairs and, with the increasing proliferation of digital technologies, there is always a danger of rising cases of online hate speech.

This scenario requires that the media – particularly in conflict-prone communities – have the skills for conflicting-sensitive reporting, are able to identify and call out hate speech online and offline, counter misinformation, and develop comprehensive plans for election coverage. Yet, the pressures which the Covid-19 pandemic has exerted on the budgets of media houses, and the restrictions some governments have increasingly placed on media freedom, all undermine the ability of the media to play the role of peace mediators, agenda-setters, and watchdogs.

That is where the role of civil society becomes crucial in ensuring the media to play its needed role at such important democratic processes as elections. It is against this background that, ahead of Uganda’s January 2021 elections, the Collaboration on International ICT Policy for East and Southern Africa (CIPESA) conducted a series of training workshops to equip journalists with the relevant skills, knowledge and tools to aid them to report on the elections in a more professional and balanced manner.

“In the 2021 general election, since public rallies were limited to a small number of people, or banned altogether in some districts, there was a heavy reliance on the media by the candidates to reach out to the electorates. It is important that media workers are up to the task of delivering information to citizens in a balanced and neutral manner,” said Paul Kimumwe, Senior Program Officer for Research and Advocacy at CIPESA.

Due to the on-going Covid-19 pandemic, the government initially suspended all public gatherings, among other restrictions although these were progressively eased to allow political rallies in some districts provided they did not exceed 200 attendees.

As part of efforts to discourage mass rallies, the communication regulator, Uganda Communication Commission (UCC), in November 2020 issued the Guidelines on the Use of Media during the General Elections and Campaigns 2021. According to the guidelines, all media stations shall not discriminate against any political party or candidate or subject any political party or candidate to any prejudice in the broadcasting of political adverts.

On the other hand, all private media stations are required to ensure that all their advertising space and airtime was not bought out by one party. Yet, leading opposition candidates were barred from accessing some radio stations and campaigning in several towns.

In the lead up to the elections, journalists had fallen victim to arrests and assaults, there was an attempted block to media outlets running online – the state requested Facebook to block mainly opposition owned YouTube channels, reports of denials of accreditation to cover the elections emerged, thus threatening the plurality of the media.

With the media and digital platforms including social media providing key campaign platforms, there were concerns about the proliferation of disinformation, misinformation, and hate speech online. Earlier in March 2020, UCC had issued a public advisory notice against individuals (including journalists) misusing digital platforms to publish, distribute and forward false, unverified, or misleading stories and reports. In September 2020, the regulator issued a renewed order for online publishers and broadcasters to apply for operating licences.

According to Kimumwe,  the training was structured to provide the trainees with both knowledge and skills-based competences to help them cover elections more effectively and professionally.

“The curriculum included topics such as the role of media in electoral democracy, technology and journalism, electoral media-related laws and policies, peace journalism, how to prepare for and cover election day and the post-election period, and how journalists can ensure their safety,” noted Kimumwe.

He said it was important to include conflict-sensitive reporting given Uganda’s past history of a violent election process and the proliferation of hate speech during the campaigns, especially online. “We believe that the media could help in de-escalating the tensions through reporting as well as providing the much needed context and fact-checking certain utterances by politicians on the campaign trail,” he said.

Ahead of the training, there were various incidents of attacks against journalists on the campaign trail by security forces. It was important therefore that the trainees were equipped with safety and security skills as they covered the elections.

The training included editors and reporters from more than 50 media houses in the Acholi, Bukedi, Busoga, Elgon, and Teso  sub-region benefited from the training,  of whom 36% were female.

“The training helped me acquire skills to report on the elections as well as knowing my role and rights as a journalist” – Julius Wasike, Apex FM reporter, Jinja

“I have learnt how to write stories that do not ignite the emotions” – Agnes Aromo, Radio Pacis journalist, Gulu

The campaign period was characterised by high levels of violence, including beatings of journalists, arrests of presidential candidates, and the killing of more than 50 people during a riot. Whereas this created fears that the election day and its aftermath would be marred by violence, the election day and the post-election period have been calm.

Nonetheless, there are allegations that the winning candidate, incumbent Yoweri Museveni, was fraudulently declared winner with 59% of the votes, and the runner-up, Robert Kyagulanyi, also known as Bobi Wine, has petitioned the Supreme Court to overturn Museveni’s victory. The blockage of the internet ahead of the elections undermined electoral transparency, severely hindered the work of journalists, and denied citizens’ access to badly needed information.

In November 2020, CIPESA partnered with Media Focus on Africa to bring together 80 key media practitioners and stakeholders including media support organisations, media houses, journalists’ associations, government bodies, independent content producers, civil society, and security organs to deliberate on challenges and opportunities for media during elections in a digital era. Conducted in Kampala, the engagement also gave journalists tips on digital security and fact-checking.