By Loyce Kyogabirwe |
The right to information (RTI) is essential for the functioning of any democracy and is a prerequisite for transparency, accountability, gender equality and citizens’ participation in governance processes. However, Uganda faces numerous challenges to realising the right to access information despite having an access to information law. In the course of 2016, the Collaboration on International ICT Policy for East and Southern Africa (CIPESA) made various interventions to advance RTI, including holding training events and round table discussions for civil society, the media and government officials.
Uganda’s 2005 right to information law remains little known and largely unimplemented. Government Ministries, Departments and Agencies (MDAs) hardly release information voluntarily and tend to be unresponsive to information requests from citizens, due to a culture of secrecy and government bureaucracy that conflict with the law. Conversely, few citizens demand for information as a result of low awareness of their rights and the belief that public officials routinely ignore citizens’ information requests.
At a December 15, 2016 dialogue involving public officials, including information officers from various MDAs, journalists and civil society representatives, it emerged that the government and citizens have not prioritised RTI. “The role of information has been undervalued and sometimes it gets a zero release in [MDA] budgets,” said a public official. Another noted that 11 years after the law was enacted, no MDA has submitted an annual report to parliament on its information disclosure record, including requests received from citizens, as required by the law.
Other challenges prominently cited included under-staffing in MDAs, employing information officers that are unqualified and who often lack mandate to speak on behalf of the public entity, and conflicting laws that make implementing the RTI law difficult.
Journalists shared their experiences of regularly being denied information, often with no reason provided. One journalist noted that informal approaches are the primary means of attaining public information held by the state.
At an earlier training for journalists, which was held on November 23, challenges of public information officers who are either not authorised to release information, or who refer to secrecy oaths not to release information, were prominently cited.
Further, journalists pointed out the cost of accessing information as a hindrance for ordinary citizens. “If it is my right to access information then why am I paying for it?” asked Regina Nassanga of Mama FM. According to the law, a fee of UGX 20 000 (Just over US$ 5) is required when making a formal request at an MDA office.
Despite these obstacles, there are some indications that things could get better. Each government department is now required to have an information officer, and a few public bodies are beginning to implement the government’s 2013 Communications Strategy, although they have been unable to make any significant increase to budget allocations for the information function.
Civil society representatives pointed out additional concerns including the lack of deliberate action to promote RTI particularity for women and people with disabilities. Moreen Nambalirwa from the National Union of Women with Disabilities noted that when information is disseminated to the public via television and radios, people with visual and hearing impairments miss out. She also stated that despite the directive from the Uganda Communications Commission that all TV stations should have a sign language interpretation during some news broadcasts, none of the more than 10 local TV stations have done so, further contributing to the exclusion and limited participation by PWDs in governance processes.
The convenings were organised by CIPESA and provided a space for civil society, public officials and journalists to share their experiences, learn from one another, and suggest possible ways to improve access to information. 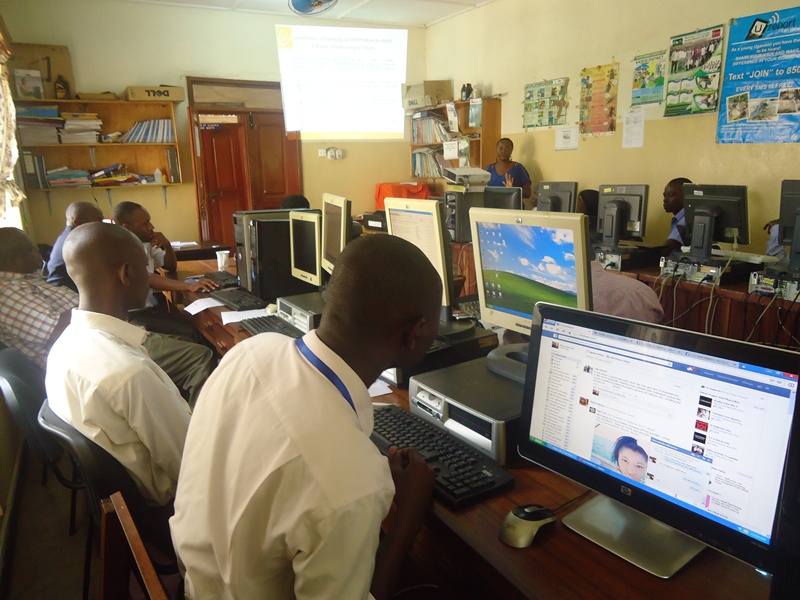 This month, the Collaboration on International ICT Policy in East and Southern Africa (CIPESA) and the E-Society Resource Centre Kasese trained local leaders in Kasese district in the use of ICTs for improved governance and service delivery. During the March 20-21 2014 workshop, local leaders of the western Uganda district were also trained in using ICTs for information sharing and promoting citizen participation.
Speaking at the workshop, District Information Officer John Thawite urged local leaders to break away from the culture of secrecy and work in accordance with the 2005 Uganda Access to Information Act. “Meaningful participation in democratic processes requires informed participants hence the need for increased access to information,” he said.
However, Mr. Thawite noted some challenges to better access to information: poor facilitation for information officers, lack of ICT tools to process information requests, the Official Secrets Act of 1964 which bars public servants from releasing certain information, and poor coordination of information systems between departments.
During introductory sessions, participants were introduced to the basic elements of computer use, the internet and information security. Later, they were introduced to the concept of e-governance and its role in improving service delivery. The training included an interaction with the district e-government tools such as the district portal (www.kasese.go.ug), district discussion group (https://dgroups.org/iicd/kasese), E-library for district e-resources (https://elibrary.kasese.go.ug) and the district news portal (https://kasesenews.blogspot.com/).
The workshop also sought to enhance the leaders’ capability to engage with citizens through social media, and illustrated how this engagement could contribute to improved services delivery. According to Alexa.com, Facebook, Twitter, blog post and youtube are among the top ten accessed websites in Uganda and their potential in catalysing citizen participation in governance was emphasised.
Leaders were further encouraged to use the Rwenzururu facebook group (https://www.facebook.com/groups/nokasesesplit/) created in 2012 by community members in Kasese during a CIPESA citizen journalism training to discuss prevailing issues in the region..
Participants welcomed the training with one saying that he would henceforth be able to get access more information about various operations of the government through the various e-governance platforms shared. Another participant asked the e-society Resource Centre to work with heads of departments so that they always send their budgets, minutes of meetings, work plans and other communication to the e-platforms.
CIPESA has since 2011 spearheaded the iParticipate Uganda project. Through grassroots based ICT access centres in Eastern, Western and Northern Uganda, CIPESA creates awareness and builds the capacity and skills of citizens, media and local government to leverage ICTs to catalyse civic participation, democracy monitoring and access to information in Uganda. The E-society Resource Center Kasese is CIPESA’s western region partner. The centre provides support, promotes ICT literacy and the use of ICT for transparency in the Kasese local government.
Article complied by Mr. Samuel Mumbere – E-Society Resource Centre Kasese and Ms. Lillian Nalwoga – CIPESA