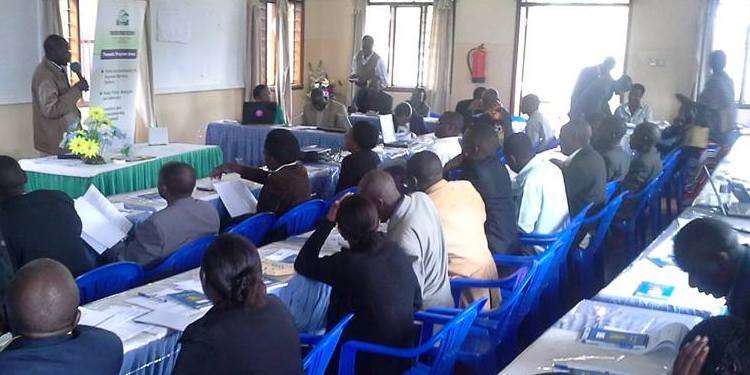 By Ashnah Kalemera |
In the Rwenzori sub-region of western Uganda, Information and Communication Technology (ICT) tools have been key tools in promoting public accountability and improved service delivery. Through an ICT “convergence approach” that combines SMS, radio and online polling, Toro Development Network (ToroDev) has for the past five years promoted information and knowledge sharing for citizens’ engagement with their leaders on priority service delivery needs and concerns in the region.
ToroDev’s project, which is part of the ICT4Democracy in East Africa Network, has empowered local citizens in offline and online advocacy and engagement with duty bearers, trained radio journalists in reporting and promoting debate on accountability issues, facilitated quarterly accountability meetings between citizens and leaders, and supported the initiation of 15 civic groups in the region. The civic groups, also known as rural advocacy forums, consist of 80 members each, and are involved in citizen journalism and community mobilisation for the radio debates and accountability meetings.
Over the years, the project has seen increased levels of citizen participation and engagement. In 2014, each monthly advocacy forum meeting was attended by at least 50 members. Outcomes from the monthly meetings are discussed on radio talk shows. Meanwhile, 60 leaders at sub-county and parliamentary level participated in the deliberations and jointly with citizens drew up action plans, among them, the State Minister for Finance.

Citizens have also gone on to leverage social media to engage in discussions on governance and service delivery. See for instance State of Service Delivery in Rwenzori Region, Orukurato, Rwenzori Journalists Forum and Listeners’ Forum Facebook with active membership pages.
However, at a national level participation of citizen in public affairs remains low. During the 2011 presidential elections, only 59% of registered voters cast their ballot. According to the 2013 Uganda National Household Survey, only 7% of households have a member that participates in governance at the local level, down from 10% in 2010.
The 2013 survey estimates that household participation in local governance in Western Uganda stands at 8.1% and the region boasts the highest proportion of citizens registered as voters (89%).
In the run up to the 2016 national elections, ToroDev convened regional stakeholders at a conference to reflect on the role of ICT in the electioneering processes. Uganda will hold local, parliamentary, and presidential elections in February 2016.
Speaking at the conference, Dr. Paschal Kabura, the director of Uganda Martyrs University Fort Portal campus, urged local citizens to take interest in staying informed of regional concerns that directly affect their livelihoods. “Voter apathy must be overcome,” he said, while calling for more active citizen participation in local governance processes through the use of ICT.
Discussions at the conference also included mainstreaming gender in governance processes. Goretti Amuriat from the Women of Uganda Network (WOUGNET) highlighted the need for building women’s capacity to participate in advocacy and accountability engagements, and for promoting awareness of gender issues at community level. She also stressed the need to consider women’s special needs such as child care facilities at local government consultation meetings, and suitable timing and conducive locations of accountability forums for both women and men.
Amuriat urged workshop participants to fight “biased cultural attitudes” in the region such as only men being leaders, what a man says being “right and final” and women being undermined due to their domestic responsibilities. She said it was important for women to realise that such attitudes “are not biological but socially constructed.”
The conference provided a platform for feedback and knowledge sharing on the performance of existing rural advocacy forums and the potential for establishing forums consisting of local government officials and civil society organisations at district level.
“As a result of the work of advocacy forums we have seen water put in place for example in Mugusu and Katebwa sub-counties in Kabarole district, two class room blocks have been put in place in Bufunjo Seed school in Kyenjojo district, roads [have been] improved in Kichwamba, Rwebisengo and Ntoroko District,” said Tumwesigye Andrew, the leader of Bufunjo Forum in Kyenjojo District, during the panel discussion on the performance of advocacy forums. “We have improved staff in health centres in Bufunjo, improved accountability and improved participation of women in budgetary processes and meetings,” he added.
The conference, which was held on November 19, and 20, 2015 drew more than 80 stakeholders from the districts of Kabarole, Kyegegwa, Kyenjojo, Kasese, Kamwenge, Bundibugyo and Ntoroko. They included district planners, radio, print and TV journalists, civil society organisations, religious leaders, advocacy forum members, youth leaders, district information officers and other local government officials.
The ICT4Democracy in East Africa Network is a regional coalition of civil society organisations leveraging ICT to promote civic participation, human rights and democracy in Kenya, Uganda and Tanzania. Coordinated by the Collaboration on International ICT Policy for East and Southern Africa (CIPESA), it was established in 2011 with seed funding from the Swedish Programme for ICT in Developing Regions (Spider) and is currently supported by the Swedish International Development Cooperation Agency (Sida).