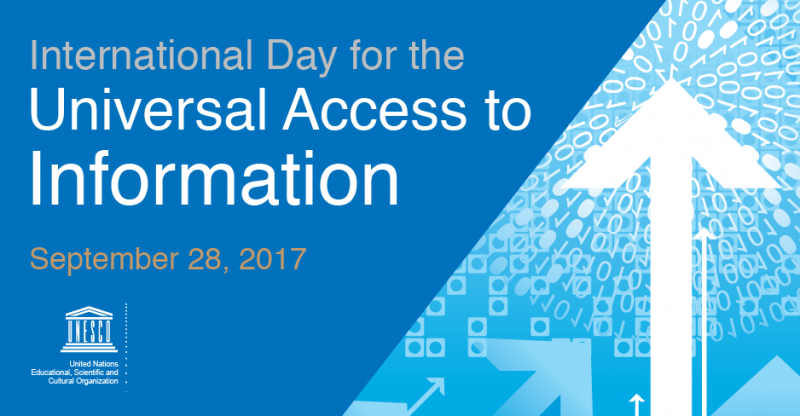 By Edrine Wanyama |
The annual celebration of the International Day for Universal Access to Information (IDUAI) on September 28 is aimed at highlighting the importance of access to Information (ATI) as a cornerstone of all other rights.  This year’s IDUAI celebrations were held in Mauritius, organised by the United Nations Educational, Scientific and Cultural Organisation (UNESCO) as part of the  E-learning Africa summit  (E-Summit). The summit is a fora for deliberation on issues of access to learning and vocational training, access to information, equality and quality in education,  literacy and governance with prioritisation of sustainable development solutions.
The Collaboration on International ICT Policy for East and Southern Africa (CIPESA) participated at the e-Summit, making contributions on open access to information and the prerequisites for ATI, including highlighting the need for a conducive policy, legislative and regulatory environment to ensure universal access to information in Africa. Among the measures proposed at the meeting were the full recognition of ATI by more African states supported by the implementation of ATI laws and regulations which effectively empower citizens to demand for information.
Discussions at the summit also entailed a call for governments to ease access to information across multiple platforms including online, in print and through traditional media, alongside clear procedures on how information can be accessed in instances when it is not publicly available. Further, there should be efforts to minimise the costs of accessing information as well as making clear provision for timely information request processing, response and complaints handling mechanisms. A key enabler of the realisation of ATI in many countries will be the repealing of draconian and conflicting legislation and putting in place robust personal data protection measures.
Meanwhile, at the Forum on Internet Freedom in Africa hosted by CIPESA in Johannesburg, South Africa, there was emphasis on the need for governments to limit exemptions to accessible information, improve on data storage mechanisms and systems, provide for mandatory disclosure of information and put in place strong and functional penal mechanisms against information officers who deny citizens information.
Access to information (ATI) is a fundamental human right recognised by international human rights instruments, including articles 19 in both the Universal Declaration of Human Right and the International Covenant on Civil and Political Rights. These articles provide for, among others, the right to freedom of opinion and expression including receiving and imparting information and ideas through media. ATI is also recognised in articles 13(1) and 17 of the Declaration on the Rights of the Child; article 15 of the United Nations Declaration on the Rights of Indigenous People; and the United Nations General Assembly Resolution 59 (1).
The summit brought together participants from all the 54 African countries. However, African countries continue to grapple with enacting ATI laws. Out of 54 countries, only 22 have enacted ATI laws. Additionally, these existing laws have been criticised for failing to meet international minimum standards, with limitation to access outweighing access rights.
Despite the overwhelming participation of African countries, the dilemma remains in the low response to ATI legislation. It should be noted that the lack of ATI legislation negatively impacts accountability and transparency by the state, which are tenets grounded on access to information.