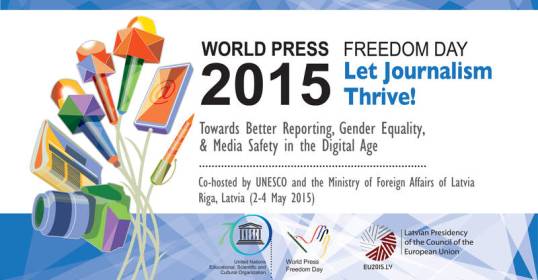 UNESCO |
Every year, 3 May is a date which celebrates the fundamental principles of press freedom; to evaluate press freedom around the world, to defend the media from attacks on their independence and to pay tribute to journalists who have lost their lives in the exercise of their profession.
Over 100 national celebrations take place each year to commemorate this Day. UNESCO leads the worldwide celebration by identifying the global thematic and organizing the main event in different parts of world every year.
The international day was proclaimed by the UN General Assembly in 1993 following a Recommendation adopted at the 26th Session of UNESCO’s General Conference in 1991. This in turn was a response to a call by African journalists who in 1991 produced the landmark Windhoek Declaration on media pluralism and independence.
To mark the 2015 World Press Freedom day, UNESCO will lead the global celebration with a main event under the theme “Let Journalism Thrive! Towards Better Reporting, Gender Equality, and Media Safety in the Digital Age”.  The event is co-organized by UNESCO and the Government of Latvia, and will take place from 2-4 May 2015 in Riga, Latvia.
The Collaboration on International ICT Policy in East and Southern Africa (CIPESA) will be participating in the event represented by Wairagala Wakabi as one of the speakers in the Plenary 3 Session on “Digital Safety for Journalists” on 4 May 2015.  The discussions during this session will be enriched by CIPESA’s experience and expertise, particularly under its OpenNet Africa initiative.
Meanwhile, on May 2, CIPESA will convene journalists in Kampala, Uganda for digital safety training as part of its ongoing online security capacity building efforts for human rights defenders, minority groups, activists and the media in East Africa.