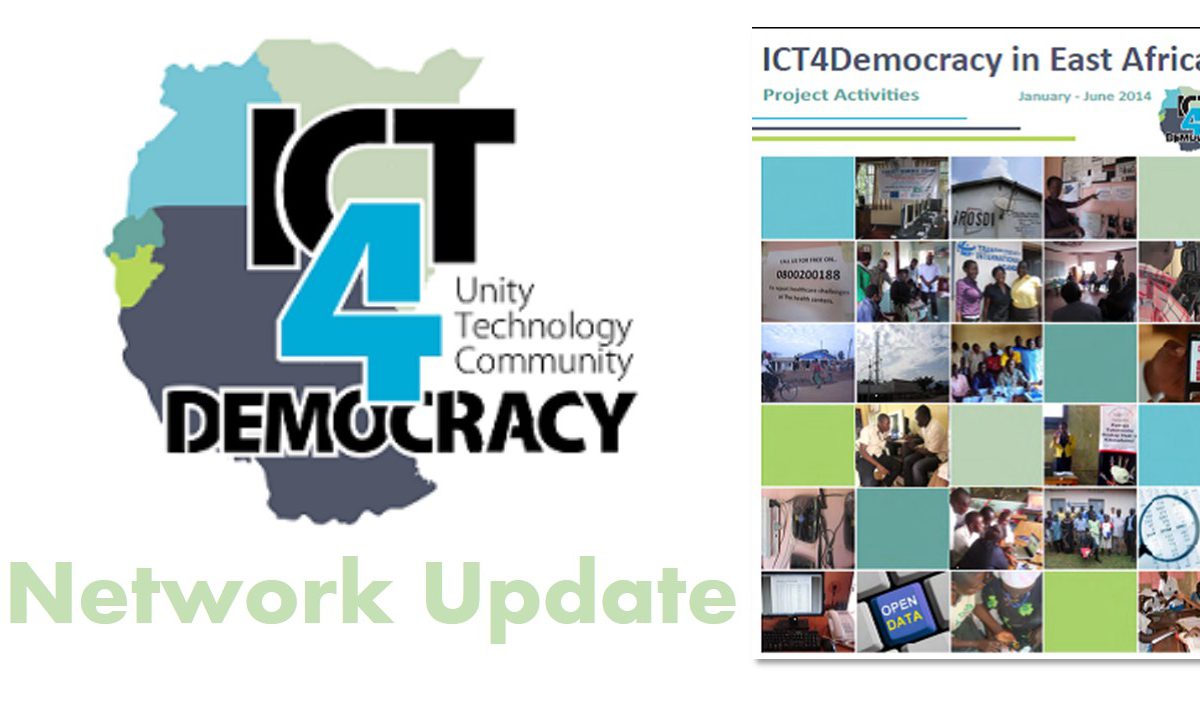 By Juliet N. Nanfuka
The network of seven partners (profiles) unified under the ICT4Democracy in East Africa initiative have since 2011 jointly worked to enhance the capacity of citizens and governments in using ICTs to promote human rights, good governance and citizen participation.
Between January and June 2014, the partners each undertook activities that aimed to support the inclusivity of citizens in transparency,


accountability and service delivery monitoring through the use of Information and Communication Technologies (ICTs) in Kenya, Tanzania and Uganda. These activities are increasing citizens’ participation in decision-making processes and strengthening democracy in the region.
The partners have each created unique approaches to encouraging citizen participation through mobile short message services (SMS), FM radio, social media such as Facebook and Twitter, crowd-mapping platforms and a toll free call centre. Research has also been conducted by some partners on the knowledge and perceptions associated with ICT use and the flow of information between and among citizens and government.
As part of the projects, partners have pursued direct community engagement with grassroots based organisations, local governments, media, policy makers, voluntary social accountability committees (VSACs), academia, the tech community, and civil society organisations in the use and promotion of ICTs in governance.
In brief, some of the activities pursued by the partners include the below:

Transparency International (TI) Uganda has completed the installation of a toll free call centre at its Lira field office. By calling 0800 200 188 toll free from any local mobile phone service provider, citizens can report on corruption and poor service delivery in the health sector in Northern Uganda.
Through the call centre and as part of its ICT4Health Service Delivery project, TI Uganda aims to reduce the rates of health worker absenteeism, increase community participation in monitoring the functionality of health centres and advocate for polices to improve health service delivery in the post conflict region.
This article was published on July 24, 2012, about the ICT4Democracy in East Africa project, which brings together various partners in the region

This article was published on May 18, 2012, about the ICT4Democracy in East Africa project, which brings together various partners in the region – among them CIPESA.
ICT for Service Delivery in Northern Uganda
Monthly Voluntary Social Accountability Committee (VSAC) meetings continued in April, with prevailing bad governance and poor service delivery issues reported in the districts of Gulu, Amuru, Apac, Kore and Oyam and uploaded on the Women of Uganda Network (WOUGNET) Ushahidi platform.
Among the reports and follow up action:

WOUGNET reports that the continued support of district and sub-county leaders, as well as CSOs, continues to encourage the work of VSACs.
Meanwhile, Transparency International (TI) Uganda has embarked on an awareness raising exercise for its toll free call centre which will enable citizens to log complaints about health service delivery in the region. Agreements have been reached with a number of health centres to allow for the painting of the toll free number on strategic public access points on the centre premises.
SMS for Human Rights
In Tanzania, the Commission for Human Rights and Good Governance (CHRAGG) in collaboration with Bessbrook International Ltd. of Tanzania completed the implementation of the SMS for Human Rights Management Information System. The system has been installed and is being tested in a working environment. User feedback and opinions are being collected on automated responses from the system.
However, the system has so far been unable to allow for multimedia messaging and content. CHRAGG and Bessbrook are working to rectify this. Full system deployment is pending an SMS short code provision from the Tanzania Communications Regulatory Authority and toll free services from leading telecos.
mGovernance in Kenya
During April, iHub Research conducted user-centred design workshops as a basis for strategising on building mobile governance applications from citizen users’ perspective.
Activity planning for fieldwork to explore the conditions for successful mobile phone enabled governance across Kenya is also underway. Through its extensive grassroots based Human Rights Networks (HURINETS), the Kenya Human Rights Commission (KHRC) will assist iHub Research in choosing appropriate field sites across the country and facilitate interaction with local communities. iHub Research is also anticipating to engage Mzalendo in its research. The blog platform for holding leaders accountable and rating their work will offer feedback on the research questions to be included in the full data collection exercise.
Meanwhile, the Social Development Network (SODNET) has also agreed to share their raw data on Huduma to enrich iHub Research’s work. iHub research will use these findings to identify their key thematic areas of focus based on feedback from the platform. Huduma is a mobile phone short code platform for Kenyan citizens to voice the difficulties they encounter in using public services.
iParticipate Uganda
The Collaboration on International ICT Policy in East and Southern Africa (CIPESA) published and disseminated a report entitled ‘How ICT Tools are Promoting Civic Participation in Uganda’. The report illustrates how Information and Communication Technologies (ICT) are aiding citizen participation in Uganda, but also points to the challenges that need to be overcome for these technologies to have a wider impact on governance. Read the full report here.
CIPESA also finalised the Open Governance in Uganda study. The study sought to establish Uganda’s readiness for open data, capture citizen’s perceptions on open governance in Uganda as well as form a basis for advocating for increased government openness in Uganda. During the study, awareness about open government and its benefits was raised, highlighting an urgent need for open governance in Uganda. The reports produced will go toward CIPESA’s wider campaigns in promoting open governance in Uganda and the use of ICTs for democratic governance.
In April, CIPESA represented Uganda at the Internet Society (ISOC)’s Global INET event in Geneva, Switzerland. Furthermore, CIPESA attended the Digital Migration Workshop for Southern and Eastern African Countries. Insights from the workshop are available here.
Other news
In April, the ICT4Democracy in East Africa network participated in the Stockholm Internet Forum that aimed to deepen discussions on how freedom and openness on the internet can promote social and economic development globally. Participants included media, civil society, academia, telecommunications, national and international development agencies. Organised by the Swedish Ministry of Foreign Affairs, the Internet Infrastructure Foundation and the Swedish International Development Cooperation Agency (Sida), the forum took place on April 18 – 19, 2012.
For more information, visit www.ict4democracy.org

SMS for Human Rights
In addition to Lindi, Mwanza and Iringa regions, the Tanzanian Commission for Human Rights and Good Governance (CHRAGG) extended its field studies to gather user requirements to Dar es Salaam. With a clearer indication of what citizens want, the Commission has now started work toward the system requirements and features design of the mobile phone based Complaints Handling Management Information System.
During December, CHRAGG undertook a study tour to the offices of the Kenya Human Rights Commission (KHRC). The two organisations shared knowledge and information on the technology aspects of their ICT for Democracy projects.
Catalysing Civic Participation and Democracy Monitoring Using ICTs
The Collaboration on International ICT Policy for East and Southern Africa (CIPESA) in December undertook a mini survey to identify the knowledge, attitudes, and the needs of citizen groups and local governments regarding the utility, effectiveness, and security of ICT for democracy in the country’s western region. The survey involved focus group discussions at the Rwenzori Information Centre Network (RICNET) and individually administered questionnaires in the town centres of Kabarole and Kasese districts.
At Kasese e-Society, CIPESA’s western region grassroots based partner, staff were trained in the use of a collaborative workspace that will be used to document the centre’s activities related to the project. To improve its work in using ICT for enhancing civic participation, CIPESA provided to the centre two desktop computers, a digital camera and monetary contribution toward its internet connectivity.
M-Governance: Exploring Conditions for Successful Mobile Governance in Kenya
iHub’s research team are undertaking work to ascertain the numerous mobile technologies out there in relation to governance. They are currently approaching governance application (apps) developers to seek permission to test their apps in a usability focus group during January. The aim of the tests will be to understand how various stakeholder groups would interact with the technology. The usability tests are to be carried out initially in Nairobi with the findings used for future testing in other parts of the country.
In early February, iHub Research plans to hold a second workshop to disseminate the findings from the exploratory research and the Nairobi apps usability testing. The workshop will take on the same format as the one held last October.
Reforms through Citizen Participation and Government Accountability
The Kenya Human Rights Commission (KHRC) is in the process of procuring ICT equipment for 10 community-based Human Rights Networks (HURINETs). Information and work from the HURINETs on the ground will feed into the crowd sourcing and civic participation website KHRC is developing.
Website development is nearly complete and KHRC is due to hold a press conference to launch its project. The HURINETs, upon receipt of the equipment, will be trained on how to effectively use ICT to engage citizens and hold their leaders accountable.
Promoting Social Accountability in the Health Sector in Northern Uganda
In December, Transparency International (TI) Uganda carried out health centre visits in Lira and Oyam districts. Talks with centre users and arrival logs for health workers indicated that whereas health centre workers were reporting to work on time (8am), service did not begin until about 10am. TI Uganda staff advised patients that they would soon be able to log complaints about health service delivery through a toll free helpline.
Talks are underway between TI Uganda and one of Uganda’s telecommunications service providers to install a call centre before the end of February. TI Uganda is also in the process of organising a press conference to inform the community about its project in northern Uganda. The aim is to sensitise citizens about the ongoing work and seek their involvement and support.
Empowering Local People and Communities to Monitor Districts’ Service Delivery Through ICTs
The Women of Uganda Network (WOUGNET) conducted two awareness-raising workshops on good governance and effective service delivery in Apac and Kole district during December. An Ushahidi platform was launched for Voluntary Social Accountability Committees (VSACs) to report and map prevailing poor service delivery issues in the districts. Workshop participants were trained on how to upload content and access information.
This article was published on www.ict4democracy.org on January 17, 2012, about the ICT4Democracy in East Africa project, which brings together various partners in the region – among them CIPESA.