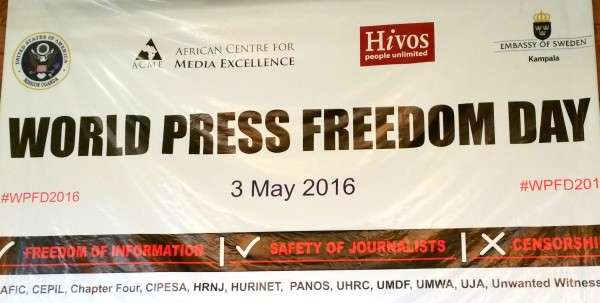 By Ashnah Kalemera |
As the world celebrated World Press Freedom Day (WPFD), the media and artists in Uganda spoke in unison about declining levels of freedom of expression in the country. Media practitioners challenged the constitutionality of Uganda’s 20-year press law and the impartiality of the national media ombudsman. Meanwhile, artists cited a growing trend of self-censorship among their community due to a fear of backlash from the state.
Musician Robert Kyagulanyi a.ka. Bobi Wine, an outspoken proponent for free expression, explained that communicating social issues through music was both “exciting and annoying” to audiences. Kyagulanyi said over the years he had experienced backlashes for making songs critical of state authorities. In 2012, the Uganda Communications Commission (UCC) allegedly banned radio airplay of Kyagulanyi’s song which criticised the Kampala City Council Authority Executive Director. Earlier this year, there were reports that UCC had once again banned another of Kyagulanyi’s songs – this time with content related to elections. It could not be verified whether the commission indeed banned radio stations from playing the song titled Ddembe. The singer stated that state-owned media had on numerous occasions declined to play some of his music that criticised the government.
“Much as censorship does not come direct, we must acknowledge that it exists for artists,” said Kyagulanyi at an event in Kampala to mark WPFD.
Kyagulanyi’s sentiments were echoed by another prominent Ugandan musician, Irene Ntale, who said she and many others often found themselves “limited” to making commercial music that is “easily saleable and sustains livelihoods” and refraining from critical songs.
“If I want to sing about the political situation in Uganda, I am afraid. Am I going to get into trouble?” said Ntale. She added that other forms of her expression, such as the attire she wears while performing, were also under threat from the Anti-Pornography Act (2014). The Act outlaws the publication and consumption of real or simulated sexual activities, or representation of sexual parts of a person.
Uganda, like many other African countries, lacks a comprehensive legal framework to promote creative, artistic and cultural expression. The country has a national Culture Policy (2006) and ratified to the 2005 UNESCO Convention on the Protection and Promotion of the Diversity of Cultural Expression in 2015. However, protections are not guaranteed and there have been reports of abuse and infringements on artists’ rights when their work challenged political, religious and social norms. In 2012, screening of a Ugandan play titled “State of the Nation” was cancelled by the Media Council because of its subject matter of corruption and poor governance, while in 2013, Daniel Cecil, a British theatre producer, was deported from Uganda following work on a play that had a gay character.
Both Kyagulanyi and Ntale called for the media to offer more support to the creative sector when artists’ freedom of expression is under attack. However, the media itself is experiencing rising attacks, and the Press and Journalist Act (1995), which regulates the media, is “antithetic to media freedom and democracy”, according to Makerere University journalism lecturer  Adolf Mbaine . He said the Media Council established under this law had led to “direct government control over what journalists can and can’t do”. This had contributed to an engrained fear among journalists and other actors on how to exercise their freedom of expression.
Mbaine also contended that freedom of the media was not a “professional right” and should therefore not be regulated. “Media belongs to everyone including the public through media,” he said.
Meanwhile, Peter Magellah of Chapter Four pointed out that there were no provisions in Uganda’s Press and Journalists Act relating to online publications and new media platforms. Under the Uganda Communications Act (2013), the Uganda Communications Commission (UCC) has the mandate to regulate telecommunications services including broadcast and online media. In February 2016, the UCC issued a statement calling for “professional and responsible behaviour among broadcasters and users of social media” during elections that were held the same month.
The chairman of the Uganda Law Society, Francis Gimara, called for more “legal challenges” to the 1995 law as well as other matters related to the rule of law with an impact on freedom of expression in Uganda. Other recommendations made included:

The WPFD celebration was organised by the African Centre for Media Excellence (ACME) jointly with other partners. The dialogue explored the right to freedom of expression and the right to information through online and offline media as fundamental pillars of democracy.
Follow the online conversation on WPFD with the hashtags: #WPFD16 and #ThisIsFreedom