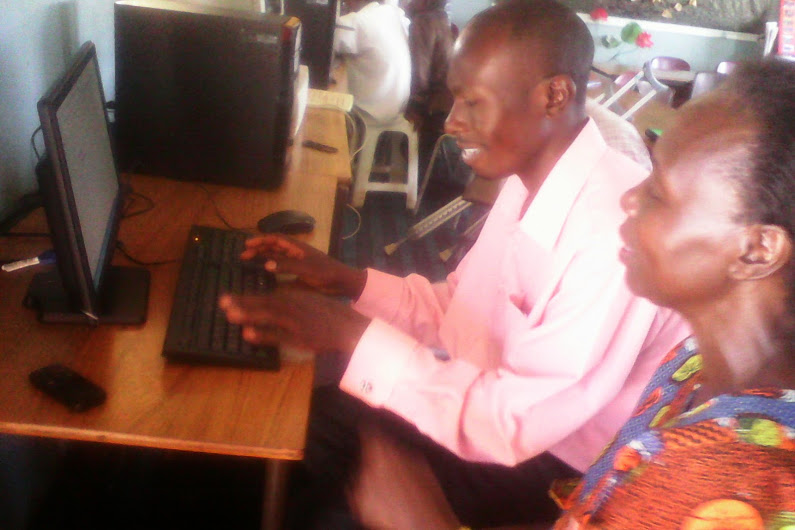 By Maria Nakirya
The Busoga Rural Open Source and Development Initiative (BROSDI) with support from the Collaboration on International ICT Policy for East and Southern Africa (CIPESA) has had ongoing training this year for Mayuge district local government officials and the local education community on the creation and use of blogs as tools for community reporting on governance and service delivery.
As part of an ongoing project that focuses on e-governance and citizen participation in the education sector, blogging was one of


the tools identified by citizens to reduce the information gap that currently exists between the schools community, parents and the local government.
BROSDI conducts several trainings in social media for varying community groups and individuals. However, this was the first time that training was conducted for a group of influential persons in the community who had limited computer experience. The group was composed of head teachers, teachers, community leaders and representatives of the community of parents.
The training was aimed at equipping participants with basic knowledge and skills in computer usage –including opening email accounts as basic requirement for blogging and registration for Individual Tax Identification Number (TIN).
Participants welcomed the training which also helped them open personal email accounts, a process that they noted was simple yet some of them had paid as much as UGX 20,000 (USD 8) to have email addresses opened for them by third parties.
A separate training was held for district officials. Participants in this training had some basic computer experience but little knowledge of blogging. However, they found it a very resourceful tool to link them and other district officials to the community they serve. They were able to read and appreciate the articles written by members of the community.

“If only we knew about this before, we would have not spent so much money.”  Teacher Grace
“I have been passing at BROSDI, seeing people type on these machines but I didn’t know they can go this far.” A participant headteacher

A key outcome of both trainings was the realisation by beneficiaries that they had a lot of information and content to share which they previously did not know how to package for public consumption. This has greatly boosted their confidence levels and the
quality of blog entries produced. The blogs were shared on the project blog (http://visualizemayuge.wordpress.com)  while others created their own blogs. All training participants were eager to post blog entries and encouraged district officials to visit the blog. To ensure a wider audience, they further suggested having the blog link integrated to the district official website.

“I have a daughter abroad who gave me a telephone with all internet settings activated but did not know what to use it for. All I do is to use it for phone calls. I did not know about this internet and that it can do wonders. Will the whole world be able to read about my contribution?” Asks a participant teacher during a training session.
“I didn’t know that I would interact with the community in a different way and I think this works especially in our area where coming to the district is a big problem.” Noted a teacher after a training session

The trainings are part of CIPESA’s wider iParticipate project. In partnership with BROSDI as well as the Northern Uganda Media Club (NUMEC) and eSociety Kasese, ongoing activities are aimed at using ICTs to facilitate better delivery of government services to citizens, empower citizens through access to information, and improve interactions between citizens and public officials.
The project is supported by the Swedish Development Agency (Sida) and the Swedish Programme for ICT in Developing Regions (Spider).