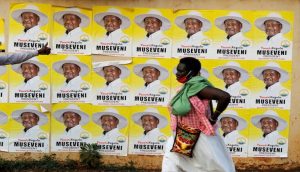 In the lead up to the January 14, 2021 elections in Uganda, we documented the technology and elections landscape in the country in a policy brief which highlighted the likely play-out of the so-called “scientific election”. We also analysed the changing trends of use of data in electoral cycles in Uganda between 2005 and 2020, a period characterised by increased use of technology and data assets t.

We joined Access Now and several other organisations in calling for internet access to be kept on during the election. However, reminiscent of the 2016 elections, social media was blocked a few days before the election, before a total internet shutdown was experienced on election eve. We documented this in A Textbook Case of Disruption to Democracy and Digital Networks in Authoritarian Countries.

Ahead of the elections, we partnered with Media Focus on Africa to bring together 80 key media practitioners and stakeholders, including media support organisations, media houses, journalists’ associations, government bodies, independent content producers, civil society, and security organs to deliberate on challenges and opportunities for media during elections in a digital era. Conducted in Kampala, the engagement also gave journalists tips on digital security and fact-checking.

CIPESA also conducted journalists’ training in three sub-regions, and hosted other engagements that brought together key actors including Members of Parliament, Electoral Commission (EC) officials, election observer groups, and human rights organisations on social media and elections, which explored how to mitigate harm including cyber violence, harassment, incitement, bullying, misinformation, hate speech and other objectionable content, while maximising the potential of technology in advancing social and political rights.

Next: Why Access to Information is Essential for Democratic Elections in Africa