Building Local Online Content Through The Creative Industries in Africa 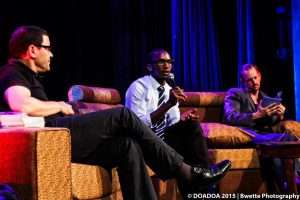 The creative industry provides a blend of literature, visual, audio, physical and verbal means through which to communicate complex social issues – increasingly complemented by online tools. In particular, the music industry in Africa is driving the digitalisation of content as it aligns itself with global trends.

There are locally developed apps to cater specifically to African content producers and consumers. Websites such as Fezah (Uganda),Mvelani (Malawi), Mkito (Tanzania) – which also offers a short message service option to source music through feature phones – and Spinlet (Finland, Nigeria, South Africa) are providing unique African music platforms through which content can be easily disseminated. These platforms are creating avenues through which African artists can promote, distribute and monetise their content while also reaching a global audience.

However, the economic potential that the music industry has – and by extension, other creative industries – is often overlooked. According to PriceWaterHouse Coopers, Kenya’s music market generated revenues of US$19.8 million in 2012, up from US$16.5 million in 2008, a figure projected to reach US$20.7 million in 2015. The report also indicated that spending on digital music will overtake physical spending in 2015.

In Nigeria, the music market generated revenues of US$51.3 million in 2012 with forecasts indicating further growth to reach US$53.8 million in 2017. The report further estimates spend on digital music content in Nigeria will rise to an estimated 66.6% of digital’s share of total spending on recorded music by 2017, up from 49.0% in 2012.

But a 2015 British Council report on the music sector in East Africa found that “the impact of digitisation on both music-making and distribution is not fully understood nor is it encompassed by statutory law, with most regulations having been passed before the digital revolution.” This impact purportedly spans beyond music, influencing other areas of the creative industry such as photography, visual arts including painting, graphic and digital design, sculpturepaint, dance and even literature.

Accordingly, last May, East African artists and performers convened in Jinja, Uganda for Doadoa, dubbed an “East African Performing Arts Market”, for a three-day event aimed at providing a platform for East African artists to engage with each other as well as to define the path that the creative industry takes in making itself more financially sustainable. Doadoa echoes the  Festival au Désert in Mali and South Africa’s Moshito festivals which also connect artists from across the continent.

Discussions at DoaDoa explored issues of content creation, music production and commercialisation in a sector that is challenged by limited infrastructure, skills, geographic divides, piracy, and fractured protection of intellectual property. As more East Africans have gone online, so has the amount of content generated for both general and commercial consumption yet it accounts for just a small fraction of the global content available online.

Despite the increased amount of online content produced, there remain few laws applicable to the creative industry and for those in existence, there is limited enforcement. An ArtWatch Africa 2013 report on Monitoring Freedom of Creative Expression noted the limited priority and commitment that African national constitutions have for guaranteeing  freedom of creative expression or cultural rights. As such, there have been reports of abuse and infringements on artists’ rights when their work challenged political, religious and social norms.

For instance, in September 2014, South African artist Brett Baily struck a nerve when his piece, Exhibit B, on exhibition in London challenged racism. Fellow South African activist and photographer Zanele Muholi has also received criticism for her work depicting the brutality that black lesbians face in the hands of their communities. In 2012, a Ugandan play titled “State of the Nation” was cancelled by the Media Council because of its subject matter of corruption and poor governance, while in 2013, Daniel Cecil, a British theatre producer, was deported from Uganda following work on a play that had a gay character.

However, despite the emergence of bills applicable to the creative industry such as Kenya’s National Design Bill 2015 or the East African Community Creative and Cultural Industries Bill, 2014, there remains little explicit mention in the bill of online media as a tool increasingly used in the creation and dissemination of artistic and cultural content. Similarly, there are no legal mechanisms to protect and promote a regional online creative economy.  Kenya however has released their National Design Bill which established the Institute of Designers Kenya. It however limits creative expression to members of the (IDK) thus posing a challenge to creatives without the means to pay the registration fees for membership with the institute. It also makes limited mention of online design content.

As creative content has become pivotal in the digital economy, the need to protect it as a form of expression  is key to its sustainability both online and offline. Creating symbiotic relationships between the artistic community across the continent, online advocacy groups and human rights defenders in pursuit of more locally driven and cohesive advocacy on social issues such as freedom of expression, privacy, data protection and surveillance is key.